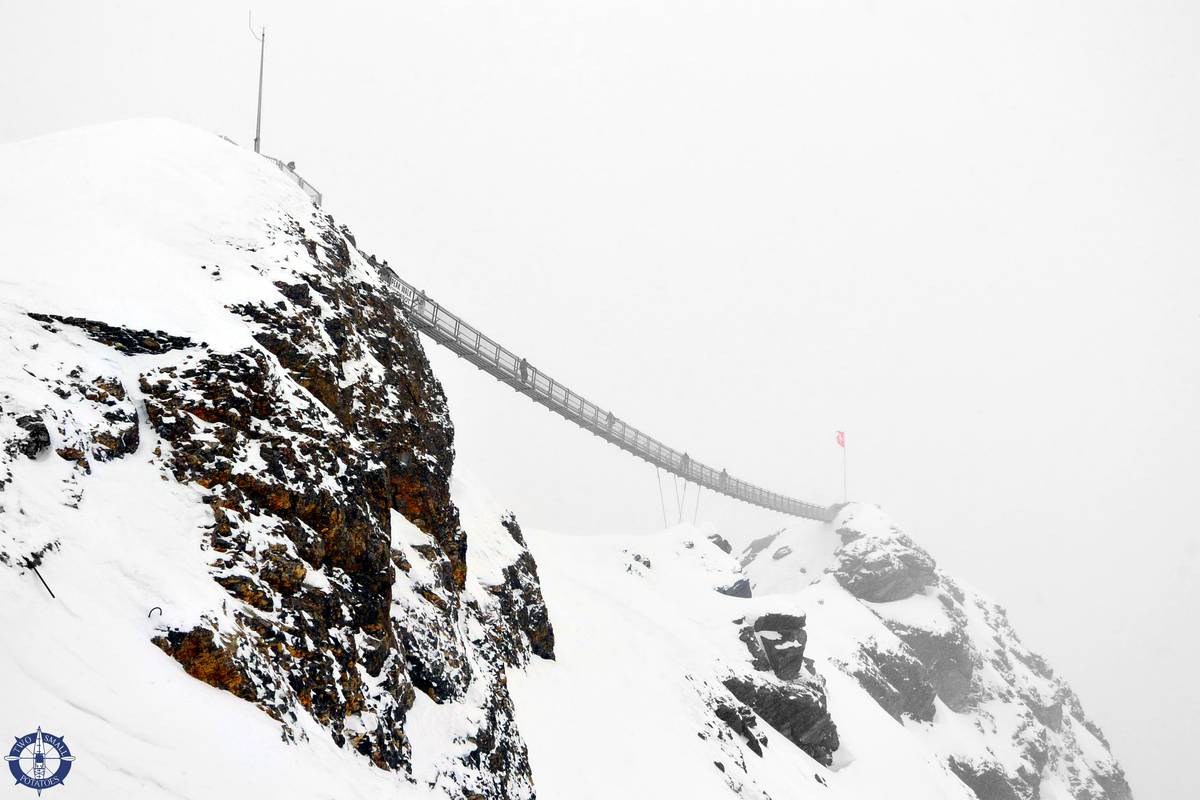 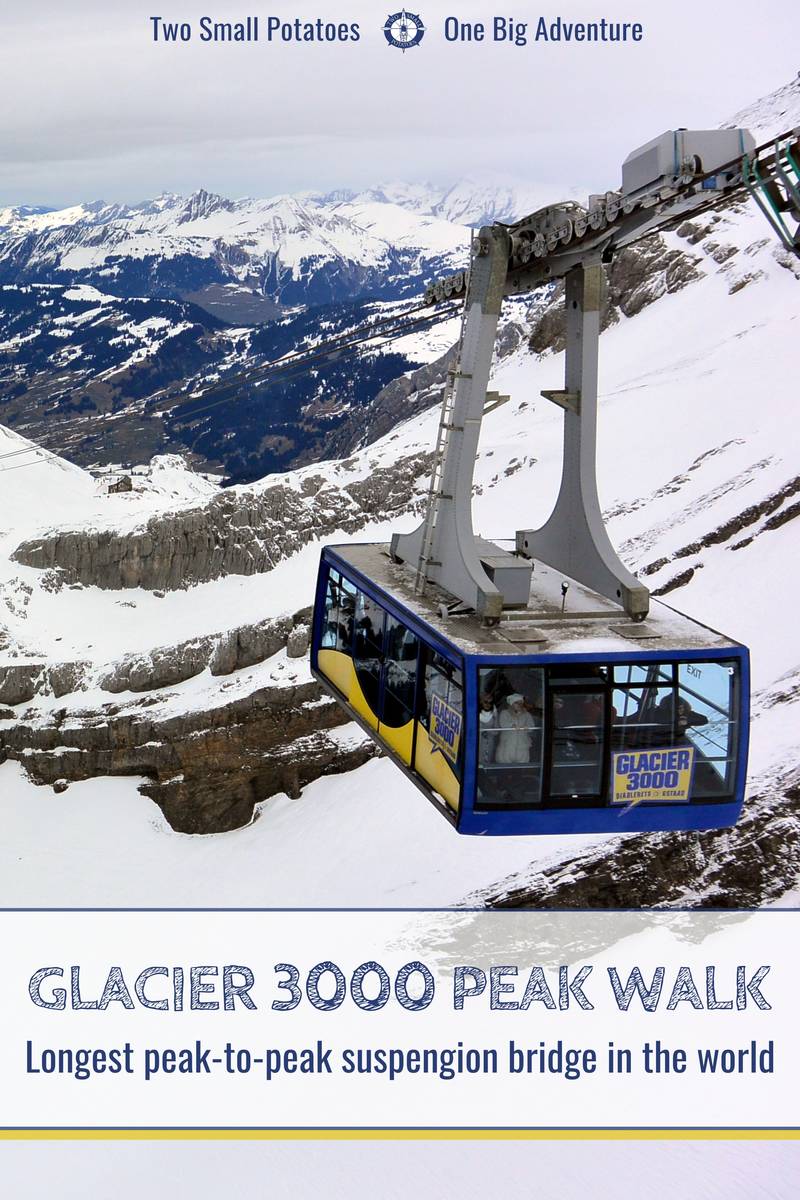 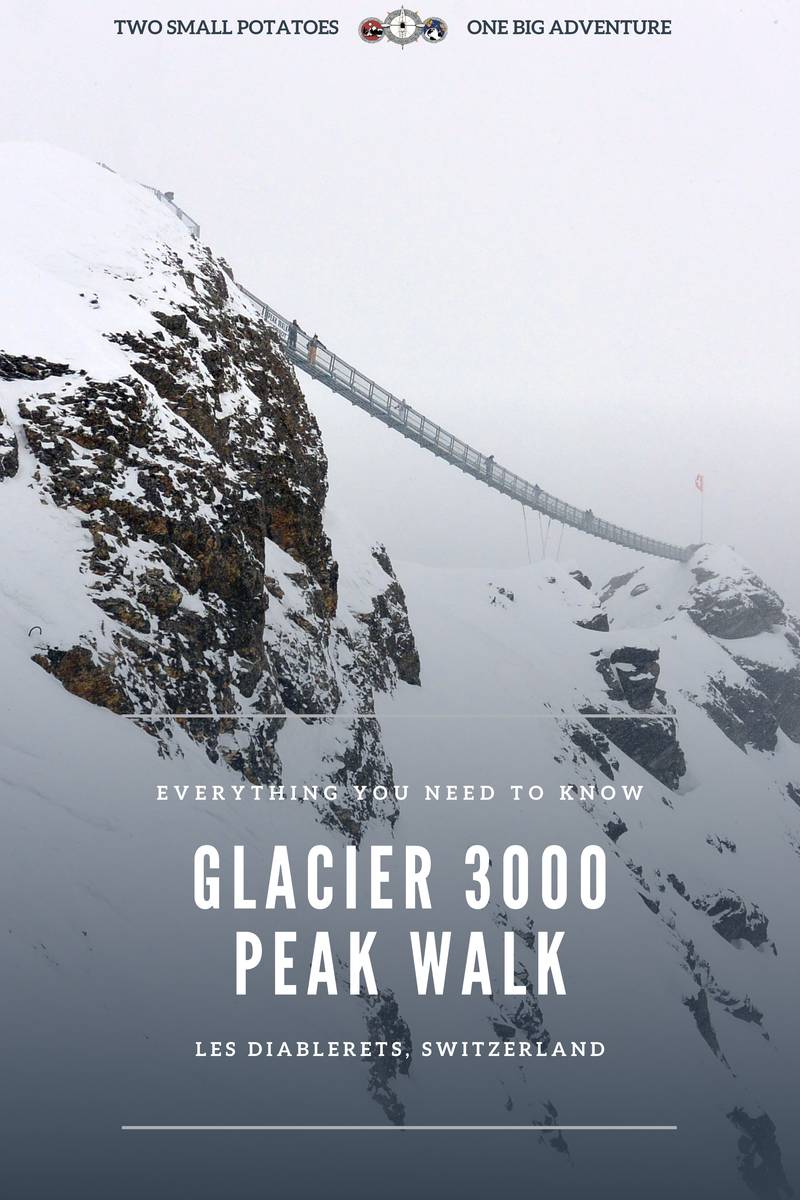 Less than 60 kilometers as a crow flies southeast of Fribourg lies the hulk of a jagged mountain chain named after the Devil himself – les Diablerets.  The Diablerets massif is made up of the highest peak, its namesake which tops out at 3,210 meters (10,531 ft), as well as an impressive line-up of towering brothers with names like Scex Rouge (Ruby Mountain), Quille du Diable (Devil’s Skittle), and Le Dôme. As of November 2014, these mountain peaks now boast of the Glacier 3000 Peak Walk – the highest “peak-to-peak” suspension bridge in the world.

Also called the Peak Walk by Tissot, the hanging bridge connects the summit of Scex Rouge with another mountain peak 107 meters away along the same ridge. In typical Swiss fashion, the suspension bridge is easily accessible to the public via a short cable car ride on board the Glacier 3000. The views of the Swiss Alps from the cable car and bridge are pretty stellar, and it’s definitely an attraction worth visiting.

If you love heights and unique attractions, you'll love the Glacier 3000 Peak Walk - the longest peak-to-peak suspension bridge in the world. Click to Tweet

Ever since I saw a video about the bridge’s construction last winter, I’ve been anticipating a visit. Taking a chance that the weather would be clear enough for decent views, we decided to go for it!

After parking in the free lot beneath the shadow of giant Glacier 3000 cable cars passing overhead, we bought tickets, cringing at the hefty price tag. Saying the Peak Walk is free is a bit like saying the kid’s toy in your Cheerios box is free. If you don’t buy the Cheerios, you don’t get the toy. If you don’t buy a ticket to the summit, most folks aren’t likely to have access to the suspension bridge except in summer. Even then, you’d have to hike allll the way up. It’s a long way up.

A bit offended at the 80 CHF per adult ticket price, we decided to go only because they honored our Swiss Half-Fare travel cards and gave us a 50% discount. Otherwise, neither of us would’ve been willing to pay the full price of 160 CHF for two adults.

Travel Tip: Buy the Swiss Half-Fare travel card to save 50% on the cable car ticket!

How to Get to the Glacier 3000 Peak Walk by Tissot

The easiest way to get to the lift station for the Peak Walk suspension bridge is by car.

You can navigate to several different final destinations, and you shouldn’t have any difficulty finding the parking area for the cable car station. You can use Peak Walk by Tissot, Glacier 3000 Bergbahn Luftseilbahn, or the Col du Pillon parking area. They’re all in the same place, which is your starting point for this little adventure.

From the parking area, you’ll buy tickets at the Glacier 3000 cable car station on site and hop on board one of the standing-only, roomy cable cars.

From the parking area and ticket office, you’ll ride the Glacier 3000 cable car to an upper lift station on the Tete aux Chamois mountain peak. Just beyond it is the Cabane des Diablerets mountain hut.

When the car stops, you’ll immediately hop onto another cable car to continue up the mountain.

As the cable car continues to climb above the Cabane, you’ll have stellar views of the valley on the way to the final gondola station, the Glacier-des-Diablerets.

From there, you’ll disembark and continue on foot. 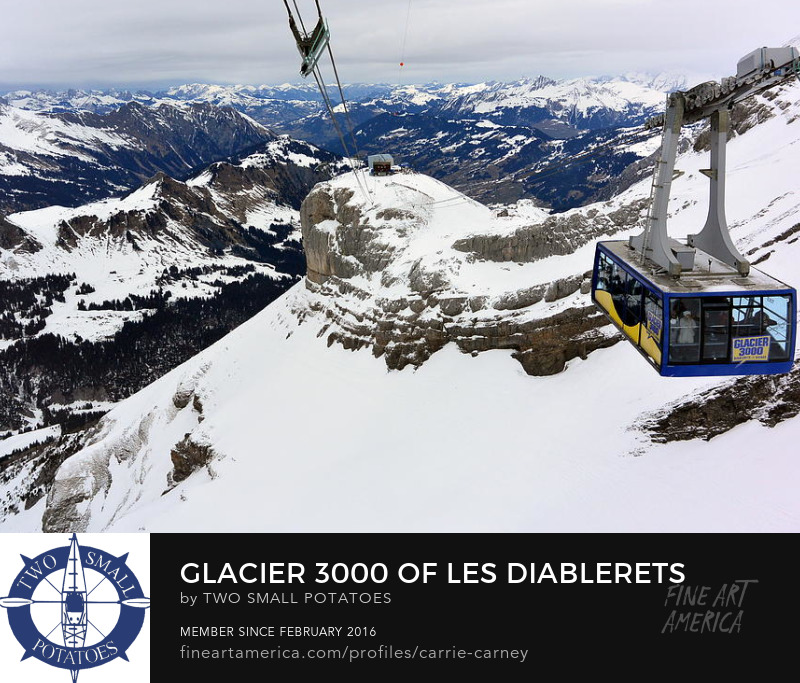 Travel Tip: The final destination on this trip is the Scex Rouge summit on the far side of the suspension bridge. Take note that it’s at an elevation of almost 3000 meters, or almost 10,000 feet. Wear warm clothes and shoes.

Arriving at the Summit

Reaching the end of our cable car journey at the Glacier-des-Diablerets gondola station, we disembarked with a mob of skiers.

Here, you can grab a small snack or buy a nice memento at the classy gift ship.

The Glacier-des-Diablerets cable car station at the summit appears to cling impossibly to the mountain face, especially in the snow.

The entrance to the Peak Walk is just a bit beyond the gondola station at the summit. One of the best vantages of the suspension bridge is actually from below, right after you get off the cable car.

We knew we’d gained a lot of elevation, but we were still surprised at how cold and windy it was when we stepped off the gondola.

We wade our way slowly upward to the bridge, climbing a series of grated metal stairs packed with ice. If you visit in winter, watch your step. The entire area is protected by hand rails and signs, but caution is still advised.

Before we reached the bridge, we heard the dull whoop, whoop, whoop of a helicopter’s blades rising below us through the icy air.

Much to our disbelief, a skier who appeared to be in some distress on the ice shelf far below caught hold of a rope dangling below the chopper and was whisked away, presumably to safety.

A few minutes after that, a trio of skiers followed his same route. Two of them carefully stepped sideways through a very narrow, rocky passage, leaning into the hillside so as not to lose control and tumble down the steep slope.

The scraping of his skis on what sounded like sheer ice made me grateful I was up above watching him rather than the other way around.

As the chopper and its human cargo faded out of sight, we finally reached the Peak Walk. We tentatively stepped out onto its swaying expanse.

If you’re afraid of heights or don’t like bridges made of grated metal, you’re not going to like what comes next!

Not for the first time here in Switzerland, I reassured myself.

It’s Swiss made. It must be safe!

Sure enough, the bridge held.

Built to withstand winds over 200 kilometers per hour, the bridge is fixed not only on both ends but also with several cable anchors to the rocky cliffs below.

Travel Tip: Dogs are allowed on both the Glacier 3000 cable car and the Peak Walk suspension bridge. Be ready to carry small dogs (and keep a firm hold on them!) or have booties for bigger dogs to cross the sharp metal grating on the bridge. 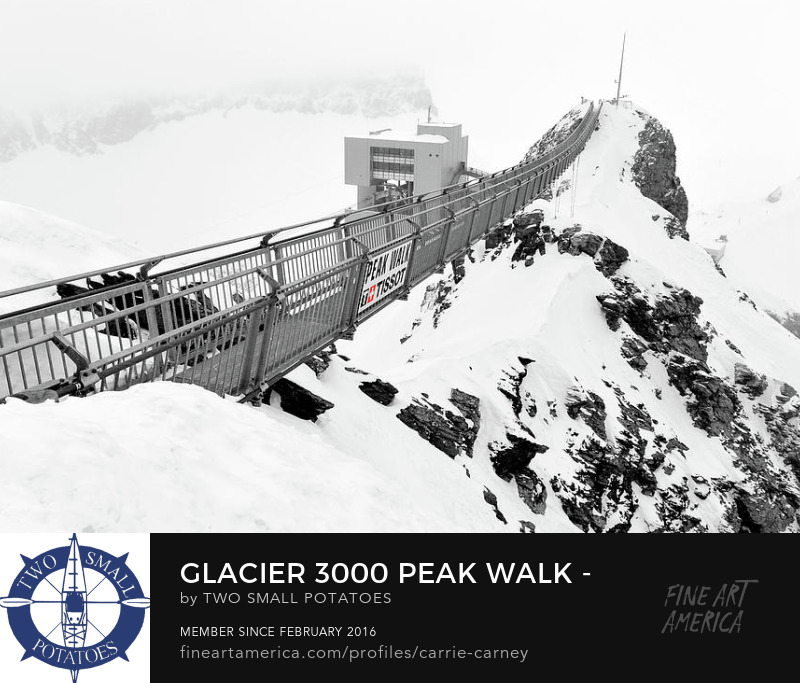 In the short distance from the cable car to the bridge, the cloud ceiling had slowly but persistently dropped, growing ever more oppressive and slowly obscuring the surrounding peaks.

By the time we reached the opposite side of the bridge, the wind was kicking up a respectable howl, stinging our faces with blinding snow.

Despite the deteriorating visibility, the views were still stunning. The striations of snow adorning each rock precipice created a more interesting landscape than bare rocks in summer.

Wherever we go, we always seem to be the last ones to clear out, and the Peak Walk was no exception.

It’s not every day that we have the highest peak-to-peak suspension bridge in the world all to ourselves. Apparently we always just need to sightsee when the weather is at its worst.

Gale-force winds and an impending hurricane in the tropics?

Is the Peak Walk by Tissot worth visiting?

Despite the steep prices and advertising hype, we were glad we’d finally made it to the Peak Walk.

We’re hoping to return later this year to hike to the Quille du Diable and Le Dôme summits, but with so many places on our Alps hiking list, we might never make it back to Les Diablerets.

If not, we’re especially glad we had a chance to see this rather impressive example of Swiss alpine engineering. We both agree that it’s worth visiting.

Construction of the Peak Walk by Tissot

The company released a neat video of the bridge’s construction. Check out the guy at 1:35 and 1:49. How much would they have to pay you to be up there?