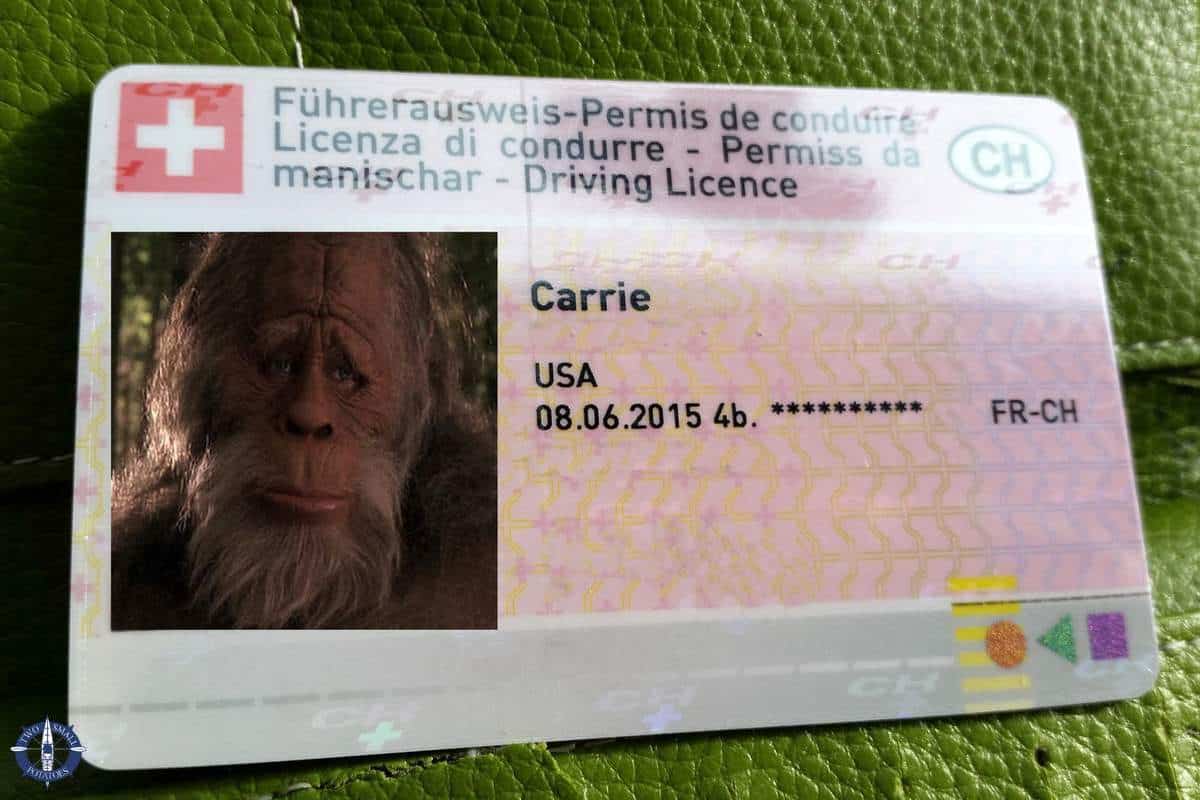 *This site contains affiliate links. If you purchase through these links, we may receive a small commission at no extra cost to you. 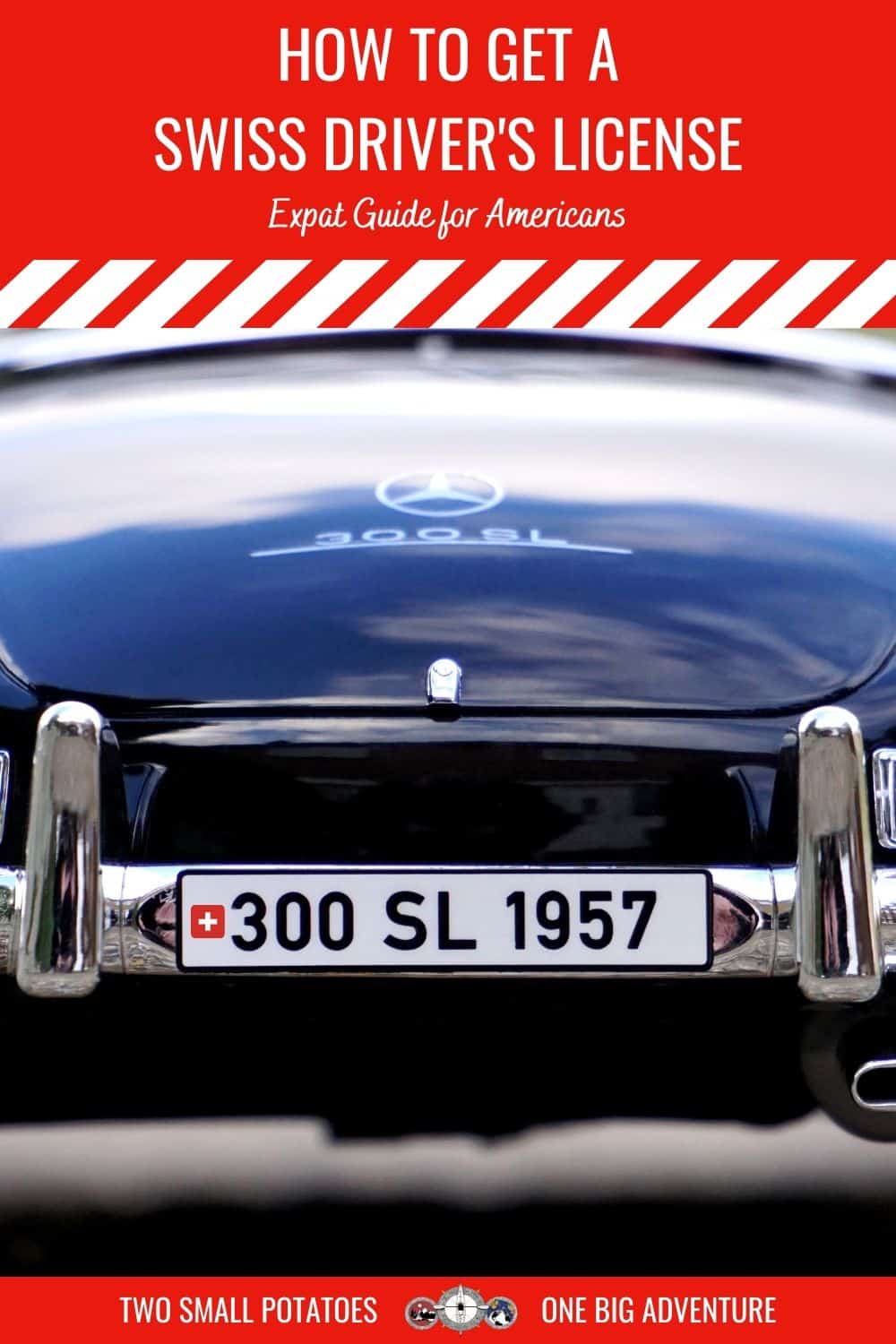 It’s official. I can now legally drive in Switzerland! Well technically I’ve been driving legally here for the last 10 months, but as of today, I’m the proud new owner of a bona fide Swiss driver’s license.

For American expats in Switzerland who’re concerned about being street legal, don’t stress. As long as you have a valid driver’s license from the USA, you can use your American license for up to 12 months after arrival in Switzerland before you have to convert it. This leaves plenty of time to complete the requirements for a driving license in Switzerland and to budget for the cost, which should be fairly minimal.

Wondering how to get a Swiss driver's license? Turns out, it's pretty easy. Find out what documents you'll need and the cost with this quick guide for American expats. Click to Tweet

Expat Tip: Make sure you apply for a Swiss license before your US license expires. It’s much easier to convert your valid US license to a Swiss one than to apply as a new applicant.

Should you get an International Driver’s Permit?

Since we arrived in July of last year, Travis and I have been using our valid Oregon driver’s licenses along with our International Driver’s Permits which we purchased right before we left the States.

Expat Tip: An International Driver’s Permit is not a valid substitute for a driver’s license in your host country. It’s merely a translation of your current driving license.

We paid $30 for our two IDPs, plus the cost of 4 passport photos. It’s easy to complete their short application form and pay online.

In hindsight, I honestly think they were a waste of money. They’ve been living in our glove box for months after getting soaked in my purse from a leaky water bottle on a hiking trip. Tattered and faded, we’ve never once needed them, not even to get a license for driving in Switzerland.

Unless you happen to have a driver’s license in a language other than English, French, or German, you really don’t need the international driving license in Europe.

If you do buy an IDP, know that it’s only valid for one year and can’t be renewed.

You’ll need to pay and complete a new application.

Where do you apply for a Swiss driver’s license?

The OCN is the Swiss road traffic office which is the equivalent of our American DMV, or Department of Motor Vehicles.

You can find specific information for the road traffic offices in each Swiss canton on the OCN website.

What documents will you need to apply for a Swiss license?

Note that if your license has expired, if you’re not from the US or EU, or if you’re applying in a different Swiss canton, the rules might differ.

If there are other requirements you must meet, you’ll most likely be required to take the practical driving test, the written theory test, or complete a First Aid course. If you have to take the Switzerland driving test or practical test, you can request to do it in English.

I wasn’t required to do any of those.

Expat Tip: If you have questions about requirements, feel free to leave us a comment below or contact your local road traffic office (OCN) directly, either by phone or in person. They can provide current correct information on requirements for your specific situation. In Fribourg canton, you can contact the OCN here.

How much does it cost to get a driver’s license in Switzerland?

My total cost of getting a driver’s license in Switzerland was 80 CHF.

This includes 10 CHF for the eye exam, 4 CHF for two passport photos, $13 for my driving record from Washington, and about 50 CHF to the OCN for the cost of the license itself.

My Personal Experience Applying for a Swiss DL

Typical of my procrastinating nature, I put off “looking into” what it would take to get a valid Swiss driver’s license until the first week in June. Appropriate since my Oregon driver’s license would be expiring on June 13th, two days before our US taxes were due and two weeks before our Swiss visas would expire.

When it rains in Switzerland, it pours.

Last Friday I gave up on the whole process after spending a couple of frustrating hours online wading through expat websites and manually translating different French web pages and pdf forms from the OCN.

I decided it was better to just go to the OCN in person.

Armed with the documents I thought would be important, I arrived at the OCN and almost immediately was shot down. I had brought the correct license application, but the section on it for my eye exam was blank. I didn’t know I needed an optician to complete that in advance.

In the US, the DMV administers a quick eye exam which is included in the price of the licensing. They do it right in the DMV office when you’re applying for your license.

The other thing I was missing was proof of the date when I received my first driver’s license in the US.

Luckily the gentleman at the OCN printed out a complete list of approved professionals in the Fribourg area who could complete my eye test. The incredibly nice, helpful English-speaking person there told me to specifically ask for the “driver’s license eye test” and that it would only cost 10 CHF (roughly $10).

I left the OCN and headed for the optical shop nearest our house, took the test and passed – because I’m awesome.

And also because I wear glasses and just had an eye exam a year ago.

I was pretty astounded when the optician told me that I wouldn’t be required to wear corrective lenses to drive in Switzerland. It’s a requirement on my US license, and I can’t imagine driving without them.

Look out pedestrians. Get off the sidewalk! Here I come!

The other document I was missing – proof of the date and state where I first received my license in the US – sounded far more difficult to get.

I got my first driver’s license in Washington State in 1997, which was a loooooong time ago. Since then, I’ve had multiple licenses in several states, so I was at a loss how to get such proof.

Again, the helpful gentleman at the OCN pointed me in the right direction. He showed me samples from different US states and said I should be able to contact the DMV in Washington and request my driving record.

Sure enough, he was right. I was able to request a copy through the Washington DMV website and pay the $13 fee immediately. They emailed me a “certificate of driving record” less than a minute later.

So today I was back at the OCN, this time armed with everything I needed to get my Swiss license.

After providing my documents, I waited a few minutes while the official processed my application. Then he walked around to a machine that looked like a computer CPU and out popped my brand new license. Unlike in the US where you wait weeks for it to arrive in the mail, my Swiss license was issued on the spot!

I was so happy when I left the OCN that I practically flew over the Poya Bridge on my way home.

The Poya Bridge in Fribourg was completed and opened in 2014, shortly after we moved to Switzerland.

Just one bonus of being able to drive!

Fun Fact: Swiss driver’s licenses are typically issued without an expiration date. Some are issued in a credit card format and expire after 10 years, but to renew it you can just send it off for a new one without any testing required.

Now that I have my very own Swiss driver’s license, we’re one step closer to really settling in as residents and not just tourists. Hopefully this little guide will help you do the same!

Other Useful Posts for American Expats in Switzerland

Take a minute to PIN it!
3 shares