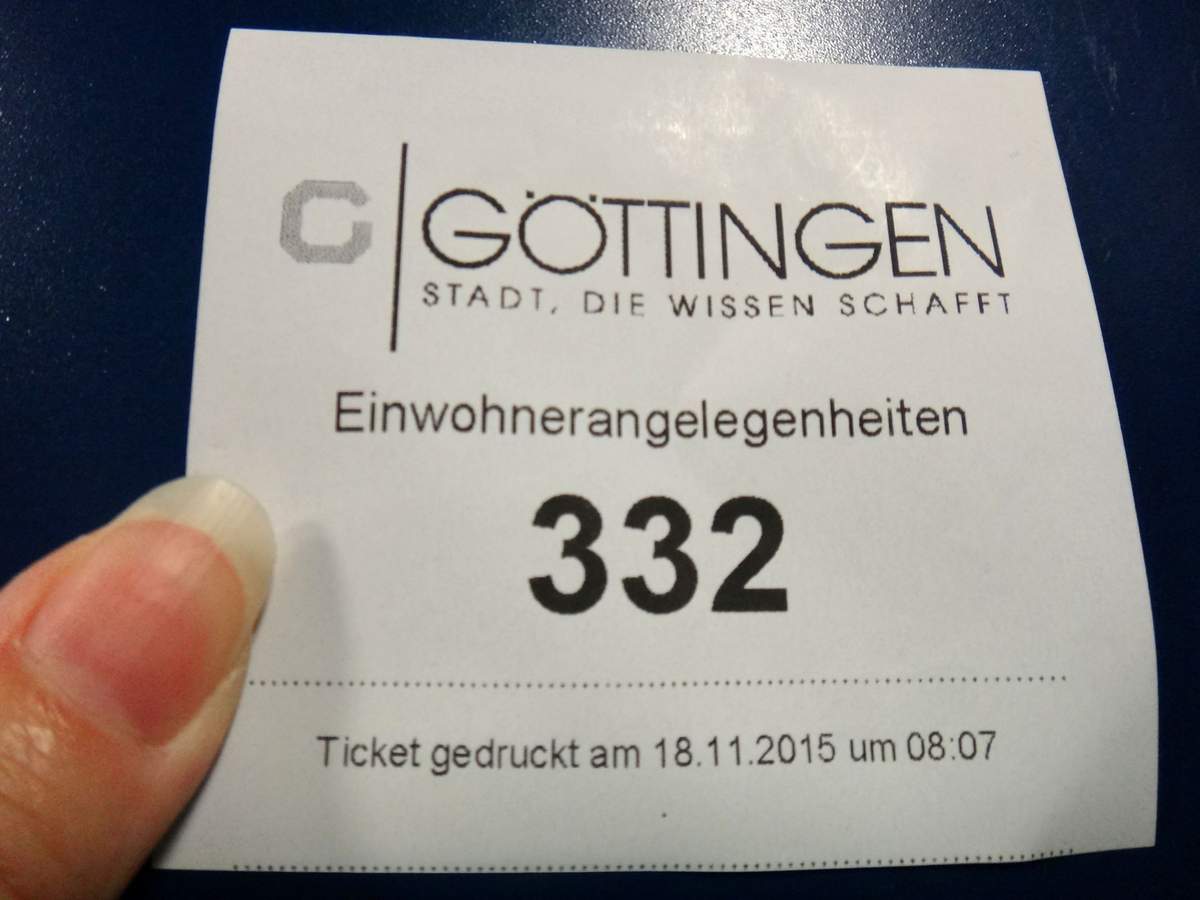 At the crack of dawn on the 26th, our American Thanksgiving holiday, Travis was already awake.  But he wasn’t basting a turkey, baking pies, or preparing green beans with garlic and bacon.  Instead, he was printing out copies of our official documents: passports, marriage certificate, work contract – the list was long.  We had an appointment to apply for visas at the local Ausländerbehörde (Immigration Office) at 9 am.  Anxious to take care of this looming administrative task, we were worried we might be rejected because we didn’t have everything they required.  As of the night before, we were still missing a lease or rental agreement, and we still hadn’t successfully registered with the local authorities.

We had tried.  On the 18th, we arrived at the Einwohnerangelegenheiten (Resident Affairs) in Göttingen at 8 am sharp.  Taking a ticket, we dutifully waited for our number to be called.

I almost felt like we were back in the States at the DMV, minus the inevitable gum-smacking teens on smart phones impatiently waiting for their learner’s permits.  After passing our documents to the gal behind the desk, she promptly asked for our home address and a copy of our lease.  Lacking both, we gave her Trav’s work address and explained our temporary living situation. Clearly sympathetic, she consulted with a colleague to see if they could allow us to register without a lease, but the answer was nein.  She sent us packing, but not before giving us a bright green form they could accept in lieu of a lease – we just had to convince the actual owner of our temporary accommodation to fill it out.

Reluctant to ask Mr. Waldhauser (the owner of our current guesthouse) because of the language barrier, we were so desperate that we called him anyway the night before our appointment.  Using Google Translate to figure out what to say in German, we tried to explain our request, undoubtedly slaughtering the pronunciation with our rudimentary knowledge of the language.

Apparently we left the owner completely baffled and quite worried because about a half hour later, his son, D.W., called to find out if everything was ok.  Grateful he spoke English, we apologized for worrying his father, again explained the situation, and told him we would figure out another solution.  He, too, was baffled at our request but offered to stop by our flat later that night to look at the form.  When he arrived, he not only filled it out but planned to deliver it to his father for his signature before returning it to us the same night.  Instead, we went with him, grateful to meet a nice local, and ended up talking to him for over an hour.  D.W. gave us the skinny on parts of town we might not want to live and invited us out for drinks with he and his wife when we’re free.  Hopefully that will be soon!

It’s because of D.W. that we were able to formally register with the authorities.  At 8 am sharp on the morning of Thanksgiving, we arrived once again at the Einwohnerangelegenheiten, took a ticket, and laid out our documents.  This time, with the bright green form filled out, “proving” our home address, a different but equally nice lady completed our registration in less than 15 minutes.  And unlike Switzerland that charged 20 chf per person every time we changed our address and had to re-register, it was FREE here!

Proof of registration in hand, we sat down for our appointment with an Immigration official, still expecting to be lacking some crucial document.  As soon as she said hello, we led with, “We don’t have a rental agreement or a permanent address.  Do we need to reschedule?”  Smiling, she assured us it wasn’t necessary, saying we likely had everything she needed.

With impressive efficiency, she entered our information in the computer, took our fingerprints with a tiny, snazzy little electronic device, we gave her passport photos to attach to our visa application, and she approved our request for visas on the spot.  We have to wait four weeks for the actual cards, which will cost 110 euros each (again, considerably cheaper than the roughly $500 in visa/residency fees we paid for our year in Switzerland).  In the meantime, she gave us multiple copies of official certificates confirming we’re approved residents and assured us we can travel freely throughout the EU and Switzerland just with our US passports.

Throughout the appointment, she also gave us a wealth of useful information.  When I told her I was a social worker in the US, she encouraged me to check with the area hospitals for jobs because they’re always looking for English speakers, she gave me the name, address, and phone number of the local employment agency that helps people find jobs for free, and she gave me the web address for searching for  jobs within her own office.

Between the two appointments, it took us just over a single hour  to complete a process we expected to be lengthy, stressful, and likely unsuccessful.  It was quite the opposite.  Not only were the folks there helpful and efficient, but they were just so nice.  Really, ridiculously nice.  We arrived as Americans feeling lost and a bit displaced, but we left as bona fide  German residents.  It’s enough to make anybody feel all warm and fuzzy inside.

It was certainly a great start to our Thanksgiving!

Type to search or hit ESC to close
See all results
wpDiscuz
7
0
Don't forget to leave a comment!x
()
x
| Reply