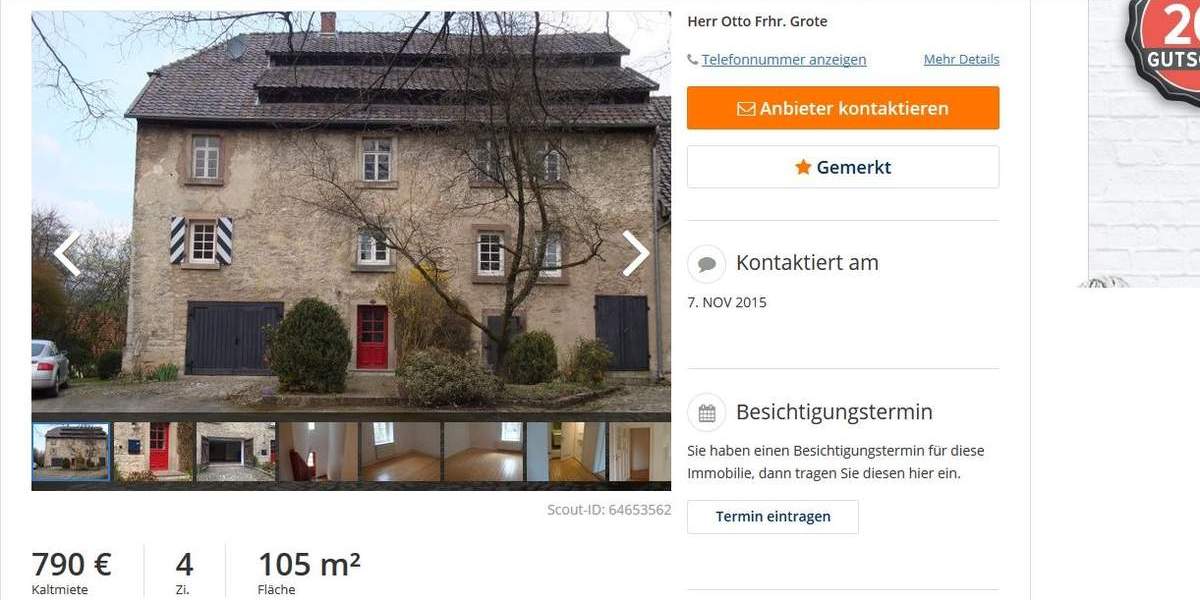 Expat Life in Germany
November 15, 2015 2
*This site contains affiliate links. If you purchase through these links, we may receive a small commission at no extra cost to you.

Travis and I have now been in Goettingen for two weeks, and the hunt for an apartment, flat, house, villa, or barn continues.  We’ve learned a thing or two already about finding a place to live in Germany.  It took us a month to find an apartment in Switzerland.  Germany is proving to be even more challenging.  Newbs who’ve recently relocated or are planning to might find our tips for German apartment hunting helpful.

Property listings are primarily posted online.  Absent are the huge banner ads visible on mega apartment complexes like in the US and the little handwritten ads in ground-floor building windows in Switzerland.  While it’s nice to be able to see photos and a brief description of a property before scheduling a viewing, it’s also limiting.

After countless hours of scrolling through over 40 websites of property listings, we’re no closer to finding a flat.  The search is made more difficult because many of the listings don’t include phone numbers, which means our only option is to send an online request.  Of the 35-40 inquiries sent, only three or four respondents contacted us back, all with negative responses.

2.  If you don’t speak German, expect folks to hang up when you call.

I’m not judging.  There’s not much else they really can do if they don’t speak English and you don’t speak German.  When housing is in short supply and demand is high, owners don’t have to call you back.  It’s up to you to be keep calling until you reach someone, find someone to leave a voicemail in German, or if possible, go in person to ask about the property.

Though I’ve experienced fewer hang ups here than in Switzerland, it’s only because I’ve had fewer folks answer the phone in Germany.  More often I’ve had to leave voice mails, all of which have gone unanswered.

Even properties that are listed as pet-friendly don’t necessarily accept pets.  As is the case in Switzerland, German landlords tend to share the belief that a certain amount of space is required for a certain number of pets, regardless of species, breed, or size.

Though we would prefer a smaller flat than our original one in Switzerland (a 100+ m² flat is an excessive amount of space for us), we’ve been declined for anything under 75 m² because, as we’ve repeatedly been told, “That’s not enough space for two adults, two cats, and a dog.”  It’s not as if we have a black bear, raven, or skunk for a pet, like Travis and I did when we were kids.

The owner of one “pet-friendly” duplex actually declined to even meet with us because she wouldn’t be able to keep our cats out of her garden.  Oh, dear.  I should’ve told her she needn’t worry because our cats are carnivores and wouldn’t harm her vegetables.

4.  Competition for housing is stiff.

Göttingen is a college town, which means availability of flats fluctuates widely with the university schedule.  If you happen to be moving to a college town, try to do it mid-summer or between semesters when you’re not competing with thousands of college students for limited housing.

The current semester in Goettingen just started in October.  We didn’t arrive until November, which means we’re a bit late to the game.  Since the local university accepts more students every year than there is available housing, students have already filled the cheapest and best housing, leaving us to compete with the last of the incoming students who’re still madly trying to find a place to live.

As with housing the world over, if it’s in a nice, central location, expect to pay an arm and a leg.  If the flat is in BFE and requires a lengthy commute, huge homes are dirt cheap.

We can expect to pay anywhere from €700-1000 per month for a mid-sized apartment in central Göttingen that’s nothing special, or we can pay a fraction of that to live in a charmingly unique historic home in an outlying village, but then Travis will have to commute to work.

While the public transportation system is well developed in Germany, it’s similar to Switzerland in that it’s difficult or even impossible to feasibly commute from rural areas except by car.  Trains don’t provide access to the smaller villages, and bus service is frequently unavailable because of worker strikes and inclement weather.

6.  The size range of available flats is rather limited.

So far, we’ve seen gobs of cracker-box flats that are between 15 and 40 m².  They cost between €200-300 per month.  While these may be appropriate for students, they’re not ideal for us.  Remember #3 above?  We’re a traveling zoo.  Where are the medium-sized apartments?!  My guess is that folks are living in them.

Of the available listings, if it’s not for a tiny little one-room flat, it’s for a monstrous 7-room family home that would only be suitable for us if we found a gazillion roommates or had a passel of kids.

7.  You can actually rent a castle.

I kid you not.

Clearly, this was immediately a front runner for me, but Travis – ever the practical one – vetoed.  It’s probably for the best.  Who wants to live in a haunted castle in the Middle of Nowhere, Germany?

8.  The realty market in Göttingen is a seller’s market.

Housing is limited, so landlords and owners can afford to be as picky as they want to be.

Properties are often gone by the time we actually connect with a landlord, and the listings that remain available frequently state they’re free immediately when they’re not.  Many have dates of availability starting in February, March, or even April 2016.  Not everyone has the luxury of planning that far in advance when they relocate.

9.  If you think finding a pet-friendly flat is difficult, good luck finding one that allows “animal husbandry.”

I can honestly say I’ve never seen a listing for any property in any country that specifically disallows this until now.

So much for my get-rich-quick scheme to start a bunny breeding program in the guest bedroom.  I was actually interested in that particular flat too until my sister-in-law promised she’d give me a pony if we fly home to the States for Christmas this year.  Though it’s clearly a tempting offer, if landlords here shy away from renting to “two adults, two cats, and one dog”, imagine what they’d say if we were a family of “two adults, two cats, one dog, and one mini equine.”