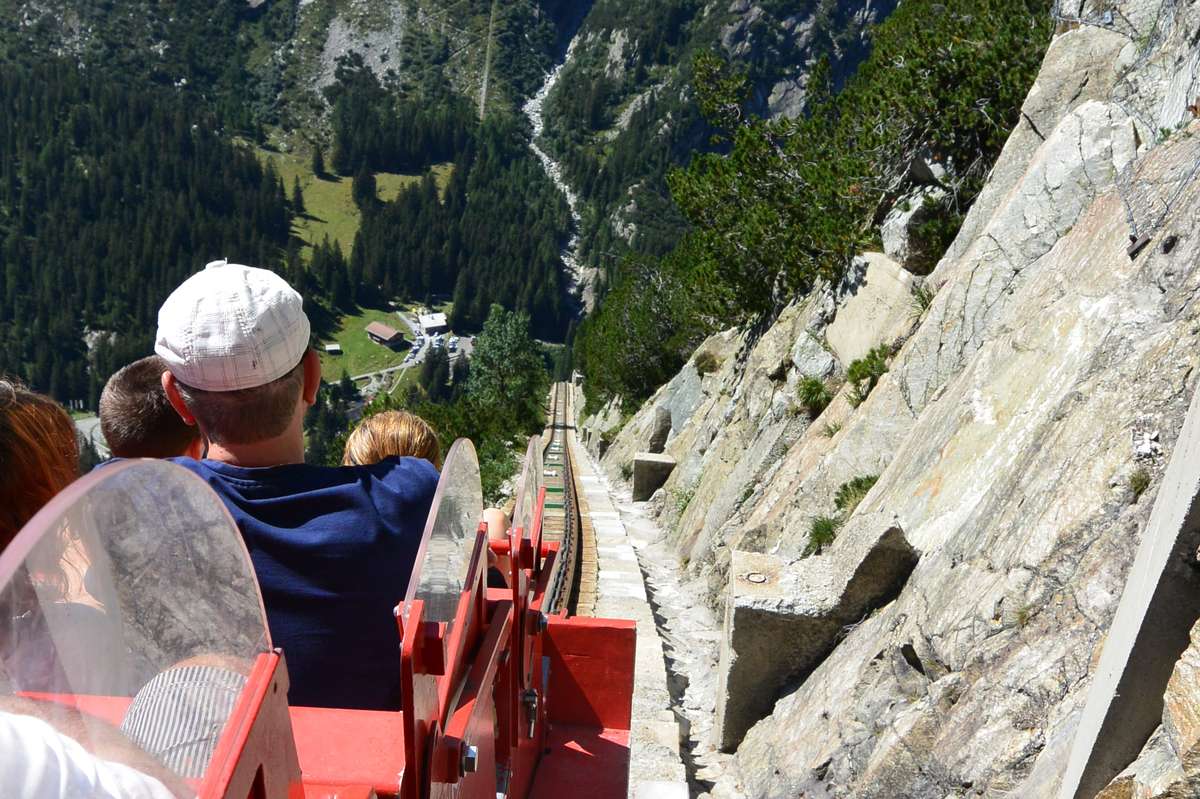 Gelmerbahn, The Steepest Funicular In Europe 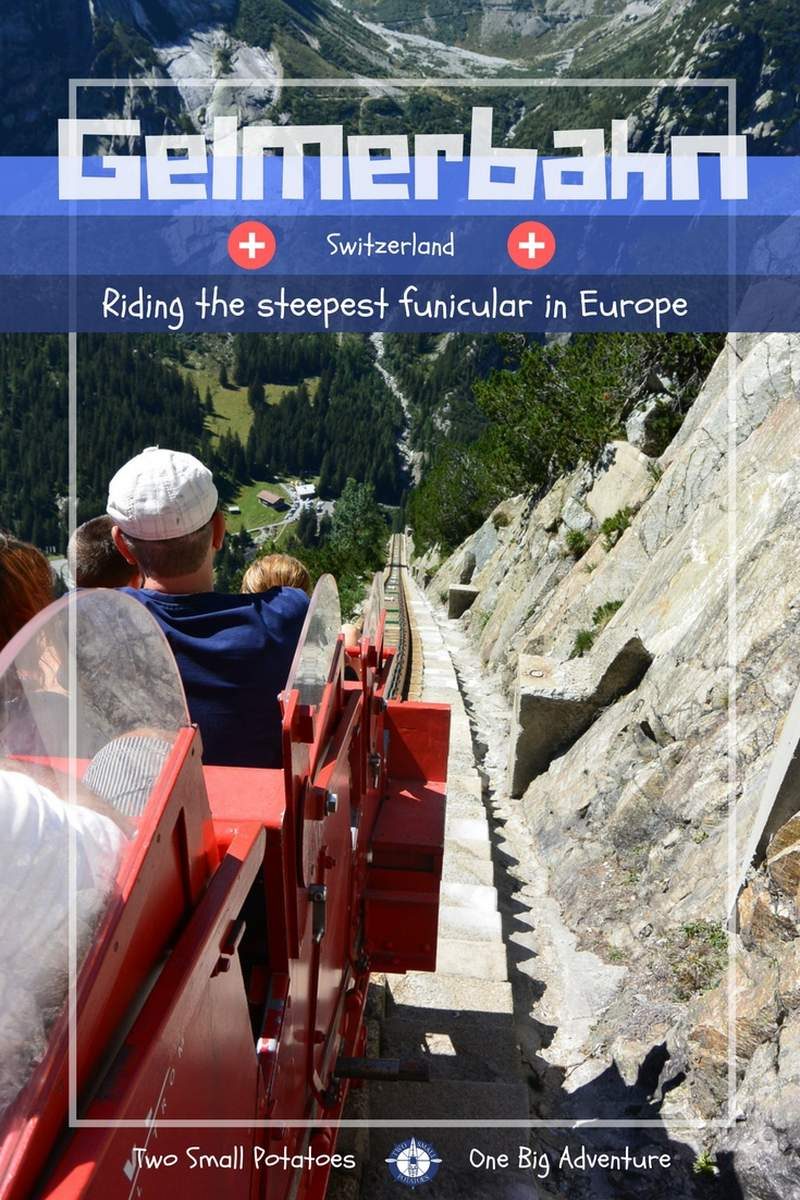 When we lived in the States, we didn’t have a habit of seeking out the oldest, tallest, or biggest of anything, at least not intentionally. If we did happen to visit a site qualifying as such, it was typically a natural phenomenon, like the world’s largest spruce tree in Washington’s Quinault Valley, the world’s greatest concentration of geysers at Yellowstone, or the world’s longest continuous volcanic eruption, which has been flowing since 1983 in Hawai’i Volcanoes National Park. Now that we’re in Europe, we keep stumbling across things like the world’s tallest church and the world’s oldest – well, the oldest of lots of things.

Have the guts to ride Europe's steepest funicular? What if we told you you'll be rewarded with a killer hike around one of the bluest lakes at the top? Click to Tweet

With their crazy, impressive feats of engineering, Switzerland is no stranger to unique sights that stretch the imagination.  When we had a chance to visit the Gelmerbahn, Europe’s steepest funicular, we couldn’t say no; we quite literally jumped on board the superlative train.

Of course, it would seem remiss to have just one little ol’ attraction at a single location.  So the site of Europe’s steepest funicular also offers a series of stunning waterfalls, a killer hike around an azure blue lake at the top, and a doozy of a suspension bridge spanning the gorge just feet from the Gelmerbahn Talstation, the ticket office for the funicular.

After purchasing our tickets for the funicular, we had an hour to kill before our scheduled departure time, so we investigated the gently swaying Handeck Bridge, then ventured a bit further on the other side of the gorge to a cluster of restaurants and hotels.  Savoring locally made coffee ice cream, we lounged in the grassy shade of some trees for so long we almost missed our train.  Luckily we were with Simone, a Swiss friend who is far more punctual than us.

It pays to have responsible friends!

The three of us set off at a dead run along the trail, arriving just as our funicular car was loading.

Typically it might not be a good idea to thunder across a suspension bridge, but desperate times call for desperate measures.

We filed in to a row of awkwardly tilted seats on the funicular – a specialized type of train that uses a cable and pulley system to pull the cars up a track.  For us, it mostly just seemed like a novel amusement park ride, right down to the lap bar for safety, though I was surprised to see the polite sign asking guests not to open the safety bar.

Isn’t it supposed to lock in place?

Ummm, apparently not in Switzerland.  Clearly nobody would be daft enough to open it.

Clicking and clacking, our car inched its way up the 3373 foot track, passing a pair of climbers laboriously inching their way up the adjacent rock face.

In just over 10 minutes, we’d covered the entire distance over a rise of almost 1500 vertical feet.

We rode comfortably tilted at a slight backward angle or seated upright for most of the ride, but I was grateful for the safety bar along the steepest part of the track where the grade pitched to an impressive 106% – roughly a 45-50 degree angle.

Before you think we’re incredibly brave or adventurous (probably only our moms), click on the brief video.  You’ll see what I mean.  I’m pretty sure our “wild and hairy ride” up the Gelmerbahn won’t nab us nominations for the National Geographic Adventurers of the Year award.

Though it didn’t exactly get our hearts pumping, I could definitely see how it would be a challenge for someone with a fear of heights.  For some people, even the Ferris wheel can be scary.  This is the Ferris wheel of train rides.

On a brighter note, the ride was more harrowing for our operator’s lack of attention to the job at hand.

Hang up and DRIVE, woman!

Imagine our reaction when we later saw the last funicular departure of the day leave with no driver.

Apparently the rail car drives itself, so our lives were never in any real danger.  Bummer.

Feeling like we’d already enjoyed a fun little adventure from our funicular ride, we still didn’t realize the best was yet to come.  Ahead of us was a superb hike around the spectacularly glacial-blue Gelmersee, along which we would discover…

I would absolutely never encourage anyone to eat wild berries if you’re not familiar with them, but any Two Small Potatoes worth their salt can identify huckleberry bushes by sight.  Not only is the huckleberry Idaho’s state fruit, but it’s my personal favorite food  – tied with Alaskan king crab.

Let’s just say we grazed like grizzlies and left with the purply stained fingers to prove it.

Before we’d hiked far, we found the ideal boulder in the lake for having lunch.  We dined with our feet submerged in the frigid water for as long as we could stand, removing them occasionally to restore feeling to toes in the warmth of the sun.

Hiking back up to the trail after lunch, we continued along the western edge of the lake.  From every angle, the water was impossibly blue, glinting in the sun.

Scattered with loose dirt and rocks, our trail was narrowly sandwiched between vertical cliffs above, and a steeply sloping rock slide to the lake below.

A boulder field with giant slabs of granite artfully laid out led us beneath the shadows of a hanging waterfall high above in the valley.

Half way around the lake, we encountered my favorite little section of trail – a narrow ledge built directly into a steep cliff face high above the water.  Not surprisingly, a cable affixed to the rock face along the ledge makes it quite safe.

While I have no illusions as to our videography skills, Trav took a short video crossing this part of the trail.  It was a fun little section!

From the ledge, we swung around the northeastern corner of the lake, crossing a couple of grated bridges before taking a moment to enjoy the views over the raging Alplibach stream.

Growing short on time, we continued on over the creek and down the eastern edge of the lake.

By then we were hiking against the clock.

Because seating on the single Gelmerbahn train car is limited to 24 passengers, it’s required to choose your return time when you buy your ticket.  For us, the only return time available was the last lift down shortly before 5 pm, which was perfect, but we’d rapidly whiled away almost 4 hours along the lake.

Arriving at the final stretch of trail over the dam’s causeway, we were surprised to see that it was blocked off to hikers with an alternate route marked below the dam.

Balancing on planks and narrow raised concrete walkways through the sludgy slack water, I eyed the dam to our right, half expecting the floodgates to open at any minute and sweep us over the cliff on our left.

Considering that the Gelmerbahn train was built in 1926 specifically to transport materials up the mountain to build the dam, hiking beneath it was the perfect ending to our day’s adventure.

We arrived back at the upper funicular station a few minutes before our rail car arrived.  We had just enough time to coax Touille, our dog, back into her traveling backpack.  She rode quietly on my lap for the steep ride back down.

It’s hard to imagine finding a similar place that offers quite the same experience; suspension bridge, crazy steep funicular ride, the unexpected surprise of huckleberries, a beautiful and accessible lake hike, interesting views of a dam, and a final impressive descent back to the norms of daily life.

So does our visit to the steepest funicular in Europe mean we’ll continue on the superlative trend?  Do we now feel the need to visit sites like the world’s largest ball of twine?

Perhaps not, but then again, if we’re ever in Cawker City, Kansas, why not?

Type to search or hit ESC to close
See all results
wpDiscuz
36
0
Don't forget to leave a comment!x
()
x
| Reply