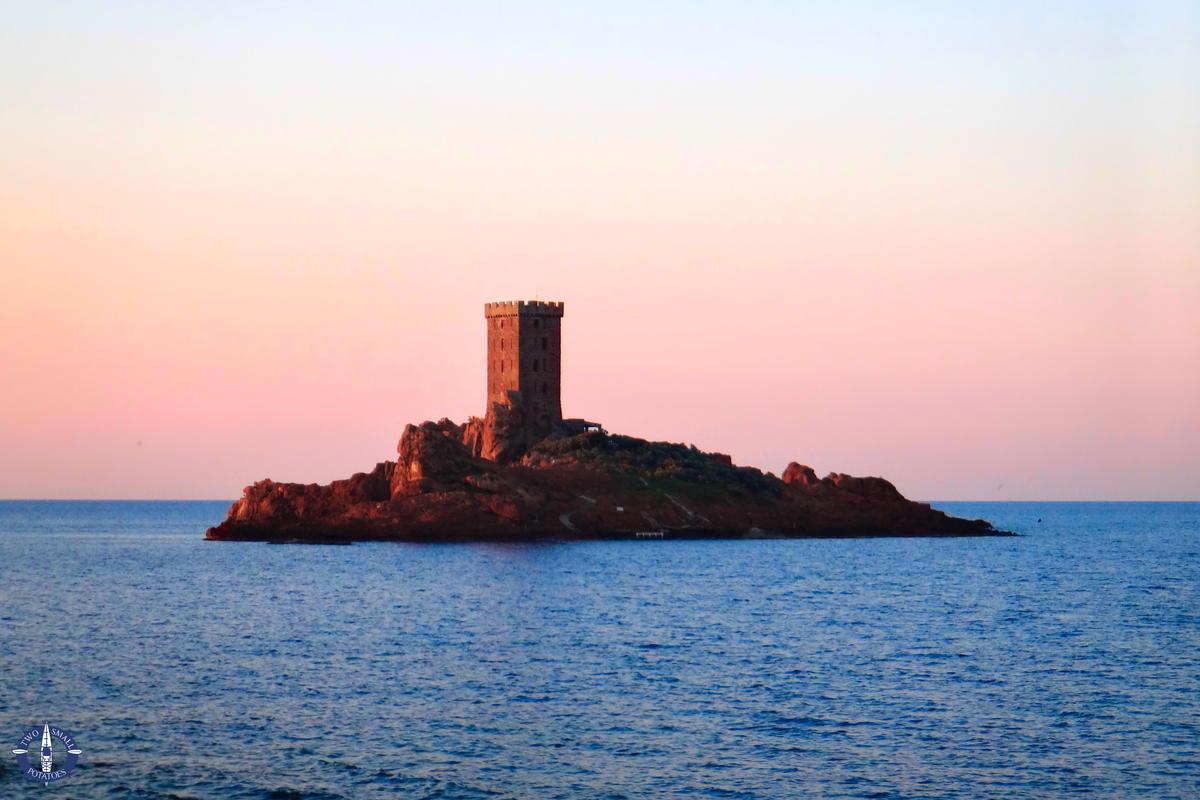 I awoke on the last morning of our road trip to Madrid to the sound of warm Mediterranean waves softly lapping the pebbly beach just a few feet from our tent.  It slowly sunk in anew that we were camped on the French Riviera, a place where as a kid, I thought only rich people visited.  Not so, as our presence was proof!

Firing up our JetBoil, I boiled enough water for chai tea for us both. When Travis woke up, I boiled more water for oatmeal, sadly using up the last two packets we’d brought from the States.  Lightweight and filling, they’ve been a breakfast staple for us for years when we go backpacking or camping.

Enjoying our chai and oatmeal, we peacefully watched the early morning rays set L’ile D’or – The Golden Island – alight with shades of red and orange.  Privately owned, the island and tower are not readily accessible for visitors, but I found myself wishing we could kayak out to explore it.  In the last few years, kayaking has become our favorite hobby, especially when paired with long distance trips that combine hiking and camping.  We sold all 4 of our kayaks when we left the States, and my Dagger Blackwater is the one possession I miss most of everything we sold or gave away.  Living in landlocked Switzerland makes it easier not to miss it so much, but it didn’t feel right to be on the shores of the Mediterranean without our boats.

In the meantime, we enjoyed being near salt water again with all the wildlife that comes with it.  After breakfast, we poked around the tide pools, hopping from rock to rock in search of interesting critters.  We saw the usual suspects: sea stars, anemones, seaweed, and entire civilizations of limpets.  We lingered longer than we knew we should; we had almost 700 km to drive home that day.  Plus, we planned to spend several hours exploring Monaco and would also be driving through Italy, which was bound to tempt us with as yet unknown stops.

Wishing fervently that we had another day to just lounge on the beach with a good book, we instead broke down our camp site and stopped briefly at the camp store for coffee before getting back on the road.  We’d enjoyed such a nice stay at Camping Le Dramont, it was truly hard to leave the peaceful campground.

The views along the Riviera as we followed the Mediterranean toward Cannes, Nice, and eventually Monaco were so spectacular that it eased my sadness at having to leave the campground.  Even Crater Lake in Oregon isn’t as blue as the Mediterranean, and every 40 kmph hairpin turn along highway D559 revealed new and stunning vistas of sea blue perfection and craggy red rock formations.

We putzed along up the coast in no particular hurry with little traffic until we abruptly came to a dead stop in a line of cars.  We had reached Monaco, a country consisting of a single city, the second smallest country in the world.  Only the Vatican is smaller.  Not surprisingly then, it’s also the most densely populated country in the world with its 36,000+ inhabitants packed into an area less than a single square mile.

Simply put, I was mesmerized by Monaco.  As we wound our way through the very heart of the city, we were met with a confusing mass of roundabouts leading immediately into more roundabouts, intense traffic filling the narrow city streets from building to building with no room for pedestrians, and treacherous tunnels spiriting us all the way back into France with a single wrong turn – which we took.

Driving in Costa Rica, LA, and even Italy can’t hold a candle to the nerve-wracking chaos of Monaco’s downtown.

Despite how much I wanted to explore the waterfront with all its richy rich yachts, the famous Monte Carlo, and especially the Palais du Prince, the Royal Palace where American actress Grace Kelly lived after her marriage to Prince Rainier III in 1956, we just didn’t have time.  Though I was incredibly disappointed, we shelved it for another day and another trip.  Instead, we enjoyed what we could see of the city’s classy opulence from the car.   Our rusty old grey Swiss VW stood out like a sore thumb among the screaming red Ferraris and countless exotic sports cars.

Even after we left Monaco and drove through France into Italy, we couldn’t escape the flashy cars.  Flashy cars everywhere.

Back on Interstate E80, we marveled at the underpasses that cut through every finger of land stretching out toward the Mediterranean.  Homes, vineyards, and pastures clung to every inch of land as if the tunnels weren’t there.

We passed through towns like San Remo and San Lorenzo al Mare, names that we couldn’t possibly pronounce without an exaggerated Italian accent.  After driving as far as Imperia on the Italian Riviera, we turned inland and cut north through the mountains.

Poor Travis was sound asleep when we entered the tiny town of Bagnasco, Italy and I unceremoniously jarred him awake so he could see how pretty it was.  I’m not sure he thought it was as “pretty” as I did.  Nothing puts him to sleep faster than riding (or driving) in a car, and I think he was asleep again by the time we left Bagnasco.

We hadn’t planned to drive through the city of Turin on a weekday around 5 pm, but our map app mistakenly diverted us off the main highway that loops around the city and dropped us right into downtown.  Despite adding an extra hour to travel a matter of miles, we were grateful for the opportunity to experience Italian driving first hand.  We learned several important lessons.

If we ever return to Turin, I think we’ll take a train.

When we finally found our way back to the A5 Motorway, we made good time on our way toward the Italian Alps and the Swiss border.  Or at least we did until we reached Aosta, a sprawling town in one of the prettiest valleys imaginable.

Throughout Italy, we found ourselves struggling to find the correct road, highway, or exit with their road signs.  Even with a map app, at times it directed us the wrong way because of a tunnel or failure to correctly route our path.  This was the case in Aosta, where our map directed us to take a turn which ultimately sent us through a long tunnel (and Europe has some really long tunnels!), forcing us to drive about 20 minutes out of our way.  Once you’re in a tunnel, you pretty much have to follow it to the other end, even if it’s miles out of your way.  No U-turns allowed.  🙁  After considerable frustration, Trav’s superb internal sense of direction and common sense led us to the correct road, and we were back on track toward the Swiss border.

By that point, we were so eager to be home!  Only one more obstacle stood between us and Switzerland…the Great St. Bernard Tunnel.

Spanning almost 6 km, the tunnel was opened in 1964 as a convenient, faster route through the Alps between Italy and Switzerland.  Prior to that, the alternative option was to drive over the Great St. Bernard Pass – at an elevation of over 8000 feet, it’s not surprising that this route is only open part of the year, weather permitting.

Considering the hefty price tag of 27 chf to pass one way through the tunnel, we would have happily opted to bypass it in favor of driving over the pass had it not still been closed because of snow.  We shelled out the money, were greeted by friendly Customs officials when we paid, and we were back in home, sweet Switzerland!

As we drove the last couple of hours home, we more fully appreciated the glorious toll-free Swiss highways, the beauty of a perfect sunset over Lac Léman, cows and chalets on every hillside, and the earthy smell of our small forest when we pulled into our driveway.  It was a wonderful trip, but it was so, so good to be home.

Know Before You Go:

What’s up next on our agenda?

The purple pins mark our travel for day ten, from our camping place in Agay on the French Riviera to our home near Fribourg, Switzerland.  The blue line roughly follows our entire 10-day travel path.

Type to search or hit ESC to close
See all results
wpDiscuz
0
0
Don't forget to leave a comment!x
()
x
| Reply
We use cookies to ensure that we give you the best experience on our website. If you continue to use this site we will assume that you are happy with it.Got it!