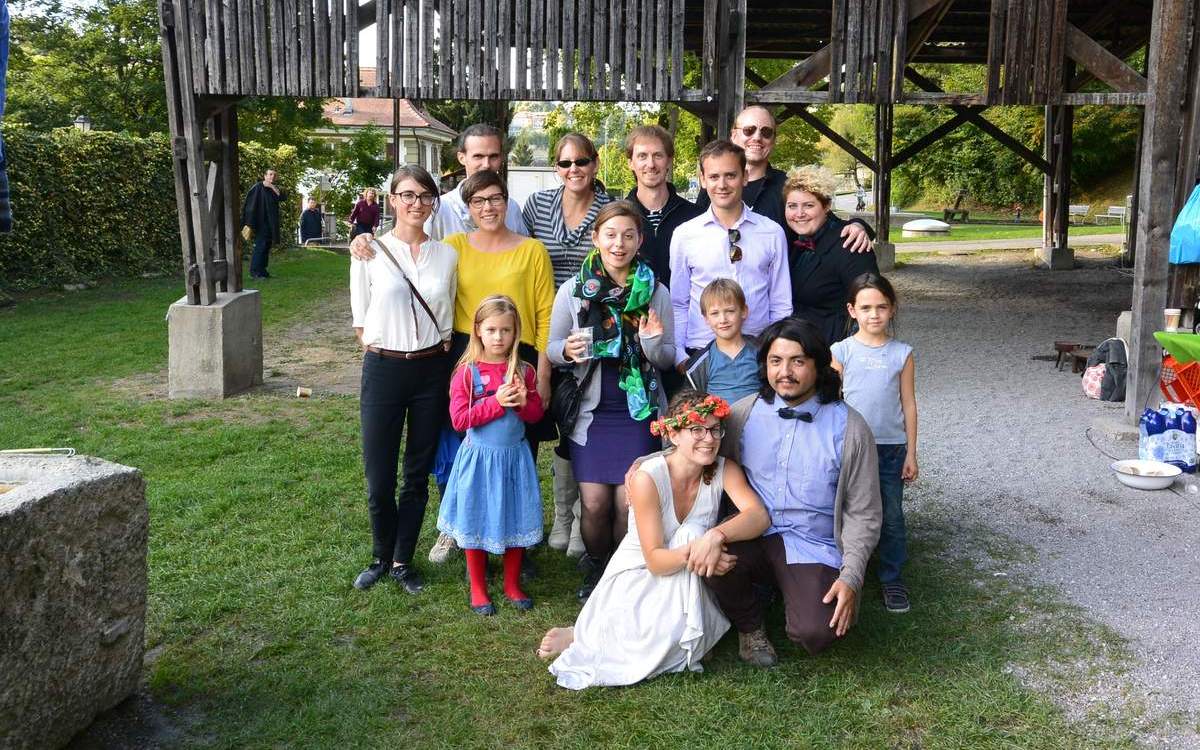 We recently attended our first wedding here in Switzerland.  It brought our lives full circle back to a group of people who wholeheartedly welcomed us just over a year ago.

When we first arrived in Europe last July, we stayed for a week at a superb Airbnb in Old Town Fribourg.  Our hosts were a lovely young Swiss/Moroccan couple who welcomed us into their home as if it were normal to suddenly have two Americans, two cats, and a dog invading your space.

That couple, Z & Jo, connected us with Rana, an event planner who later introduced me to Berlin, The Gritty City; her husband Jack, theater director whose production Antigone we enjoyed last fall; Dorota, talented ceramist whose entire family welcomed me to make pottery in Pruszowice; Dorota’s husband, who patiently taught us to ski on Charmey Death Sticks; Gintare, our previous awesome roommate whom we inherited from Jo; and Line, who, along with Dorota, convinced me to go swimming in a Swiss lake in the dead of winter.

It was Line’s wedding that had brought this core group of friends, along with other extended friends we made through them, back together on a beautiful sunny day in September.  While we waited for the ceremony to start, we mingled, catching up with folks we hadn’t seen in months, and admired the creative mixture of rustic-chic table decorations, courtesy of Kleô, Rana’s event-planning business.

Gathered together under the historic Zähringen Bridge in Old Town Fribourg, we enjoyed the couple’s casual and unique ceremony in a mixture of French, Spanish, and English.

Since they’re volcanologists from two different continents, they shared a symbolic moment when they combined volcanic soil from their respective home countries, forever merging them as one in a single jar.  Their message of love and commitment was that they must remain together for life, as it would be impossible to separate the grains of sand belonging to each.

Helping ourselves to the smorgasbord laid out on multiple tables, we found a seat and read each other quotes from our place setting rocks, laughingly trying to decipher the messages in various languages.

It may as well have been the harbinger of an already known and unwelcome truth, that soon we’ll have to actually make a decision on where we’ll move next.

¿Por qué no enseñan a sacar miel del sol a los helicópteros?  ~Why not teach helicopters to take honey from the sun?

This line from Chilean poet Pablo Neruda’s Libro de las preguntas dredged up vague memories of vainly attempting to decipher several of his lengthy poems in one of my Latin American Lit classes way back in college.  Always grateful when the professor would finally enlighten us as to a line’s particular meaning, I still enjoyed Neruda’s artful use of words and colorful imagery.

I personally loved both of our rocky messages so much that we wanted to keep them, but I wasn’t sure if they were traditional wedding favors.  Perhaps they’ll serve another, grander purpose.  I hope that the bride and groom strategically hid at least several of the rocks beneath the bridge in memory of their celebration.

Since the wedding had begun early, officially at 11 am, we were sad to have to duck out before dinner.  Over the last couple of months, we’ve been slowly listing some of our furniture for sale on Anibis.ch and had folks coming in the evening to pick up some pieces.  We were particularly sad to leave when we saw the mouth-watering side of beef slow-roasting over the campfire.  We can only imagine it tasted as heavenly as our lunch had.

Congratulating the bride and groom before leaving, everyone crowded together for one last photo together.

Though we’ll undoubtedly see some of these friends again before we leave Switzerland, some we know we won’t.

Within the past year, Jo left Switzerland, returning only for the wedding before heading to Germany to to go on tour for his recently published book, Am Fusse der Festung.

Gintare already returned to Lithuania September 1st.  We still miss her and look forward to hopefully being able to see her again in Lithuania some day.

Between our friends’ hectic work schedules, our travels over the past couple of months, and the time sink of having to move unexpectedly in July (still grateful it was only downstairs), we haven’t seen nearly enough of this wonderful group of friends.  We were grateful to be included in Line and Alvaro’s wedding festivities, not only to be able to share in the ceremony forever pledging their love and commitment to each other, but as a reminder of friendships forged in an unfamiliar country, a reunion of friends brought together in celebration, perhaps for the last time.

As one thing begins, so too another ends.  Thus is life.