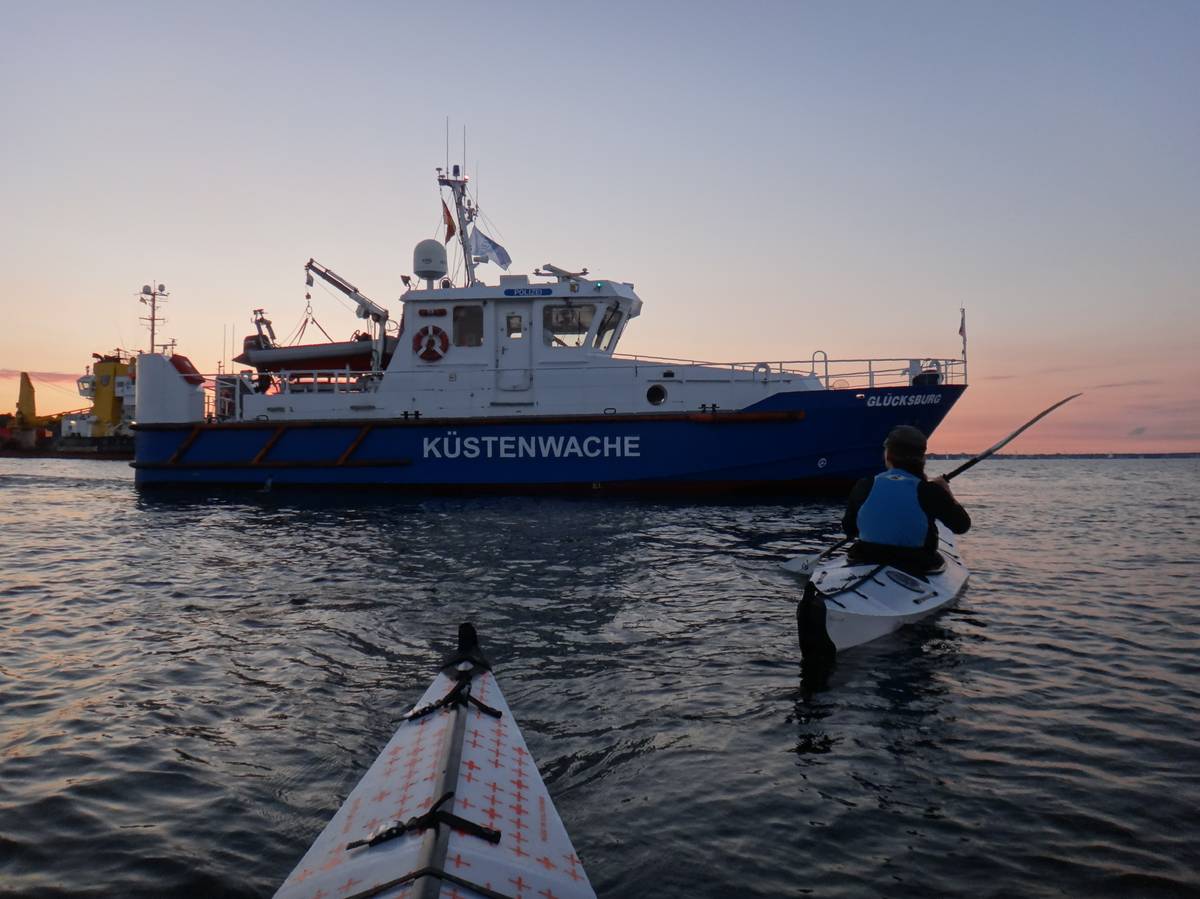 Fireworks And A Close Encounter With The German Polizei

Kiel week is the largest sailing festival in the world.  Spanning for two weeks every June in Germany, the event wraps with a superb fireworks show.  After a week of intense sailing competitions and friendly rivalries, hundreds of yachts, tall ships, catamarans, speed boats, and the random cruise ship descend on the southern end of Kiel Fjord to enjoy the show.  Even kayakers participate – or at least two did this year!  Uncertain that we were allowed to be on the water without some special permit or registration process (we are in Germany, after all), the evening took a rather unexpected turn with a minor run-in with the German Polizei.  Despite – or perhaps because of – our close encounter, we’ll always remember the evening as one of our most unique kayaking excursions, one capped with an additional sweet little bonus after the fireworks.

Before exploring the festivities in Kiel, we scouted out a promising launching point for our kayaks to watch the evening fireworks.   Since the town is a major shipping port, tall concrete barriers line much of the shoreline, limiting direct water access for small boats like ours.  Assuming we would find a grassy park gently sloping to the water’s edge or docks in a marina from which to launch, we were sorely mistaken.

Parking our car near the Port of Kiel along the eastern edge of the fjord, we walked along the waterfront.  From the vantage here, the Schwentine River widens before emptying into Kiel Fjord.

Disappointed to find the marina locked except for members, we scouted out the river in both directions, hitting upon road access to a ferry terminal next to the marina.  Though we still stood at least 15 feet above the water on top of concrete walls shoring the embankment, it looked promising.  Poking around nearby, Travis discovered a steep, rocky trail through the grass, leading down to the water.  It would mean navigating over sharp boulders up the steep hill in the dark later, but it was a solid Option #1.

Option #2 entailed launching from a sandy beach far north and paddling for several kilometers south to see the fireworks.  Normally we would prefer to paddle more, not less.  But this would require us to kayak with a lot of really big ships in or near the main shipping channel of Kiel Fjord.  Only 3.5 meters long, our boats aren’t very visible.  At night, in unfamiliar water with tides and a rocky shoreline, the option wasn’t ideal.

On to Option #3.  Visiting the festivities earlier in Kiel had given us a chance to get a feel for the waterfront nearest the fireworks display.  Concrete steps there lead conveniently to the water right in Kiel at the southern end of the fjord.  Unfortunately, since we couldn’t drive to these steps, we would have to carry our kayaks and gear for several blocks from a parking garage, through mobs of festival goers, and assemble our Oru kayaks in front of several hundred witnesses.  The thought gave us both the heebie jeebies.  Plus, we’d be stuck in Kiel traffic after the fireworks.

Opting for Option #1, we drove back to the Port of Kiel a couple of hours before sunset and put in along the Schwentine.  (Open map at end of article for exact put-in.)

Want to kayak out to watch the closing fireworks ceremony of Kiel Week in Germany? See our guide on where to put in and what to know before you go. Click to Tweet

Tingling with excitement at finally being in our boats on the water, I battled niggling concerns that we were violating some obscure German regulation.  Rounding the mouth of the Schwentine River into Kiel Fjord, we paddled past a long promontory.  Bordered with high fences, large signs in German threatened dire consequences for taking photos.  I’m not sure what harm could possibly have come from it, but we were too low in the water in our tiny kayaks to see anything up on the embankment anyway.

Paddling along the shoreline, we waited patiently for the sun to set.

Unsure of the exact location of the fireworks display, we paddled without direction or plan.  Nearing a rocky outcropping, onlookers camped out in lawn chairs were a dead giveaway that we must at least be in the right vicinity.

In the distance, an official looking boat approached.  Thinking it resembled a Coast Guard boat, we realized it was actually a police boat as it motored past.

Closely following it, a smaller blue and white boat motored directly for us.  Heart sinking, I willed the boat to veer left or right – anything but directly on course for us.

It was the police.

When the boat neared, the captain cut her engines, allowing them to gently drift toward us.  Leaning over the railing, an officer yelled something in German.

Paddling closer so he could hear us, I called back in German that we didn’t speak German.  Switching to stilted English, he asked what we were doing out on the water.

Too intimidated to fire back with a witty response (after all, it was the GERMAN POLIZEI), I reigned back the sass and respectfully told him we were there to watch the fireworks.  Warning us that our boats were supposed to have lights, he informed us that we wouldn’t be allowed on the water after dusk without them.  In Kiel, dusk in June usually falls at around 10 pm.

Assuring him we had it covered, I indicated that our lights were stashed down in our kayaks, hoping he wouldn’t call my bluff and ask to see them.

We actually did have our hiking head lamps with us, but I was afraid they wouldn’t meet their particular standards for visibility.  The lights are old and dim and we didn’t have a way to mount them on our kayaks.  We’d mostly just brought them to navigate the narrow trail in the dark after the fireworks.  We also each had two solar-powered Oru lights that were already switched on inside our translucent boats.  Too dim to be visible during the day, at night they glow with a warmth that provides nice, soft “mood lighting.”

When the officer accepted my answer with a nod, I heaved a huge sigh of relief.  Fireworks were back on the agenda!

Sweeping his arm across the bay, he indicated a circle of identical blue and white police boats that were slowly forming a huge ring in the water.  They were setting up a safety perimeter for the fireworks display.  We were squarely inside the ring.

Pointing across the mouth of the Schwentine, he indicated we should paddle north past a distant police boat to watch the fireworks from there.  Surprised that he was just so nice during the encounter, we waved gratefully before the police boat gently drifted away.  As the bow of another distant blue and white police boat swung in our direction, we paddled like mad to get out of the line of fire.

Finally able to relax in our new location, we drifted in the waves as the sky shifted from shades of pale orange and blue to vibrant pink, intense orange, and finally the deep blue of evening.

Shortly before the fireworks began, we realized that we were surrounded by boats, their lights twinkling dimly in all directions.  An hour before, we’d been virtually the only boats on the water.  Slowly and silently, they’d drifted into the bay.  They’d filled it so completely that we could barely find an empty space of water large enough where we didn’t have to paddle frequently to avoid being swept against another boat.  I envied their ability to drop anchor.

All was forgotten once the fireworks began!  We even forgot to paddle as the brilliant flashes of red and gold, green and purple lit the sky.

Yeah, yeah, I know.  Everyone’s seen fireworks, including shows that are grander and last longer than the Kiel Week finale.  But do any of those have a finale marked by hundreds of boats sounding their horns?  I think not!

The video’s not long – just a short clip of the fireworks and boats during the finale. Listen for Travis’s contribution to the other boat horns 50 seconds in.

I still can’t believe that we didn’t see any canoes or other kayaks on the water.   It doesn’t seem to be a terribly common sport in Germany, or Europe in general.  Considering how difficult it was simply to find direct water access to launch our boats, it’s easy to see why many folks would be put off by the inconvenience and effort to launch in Kiel.  But it was just so worth it!  If you are an avid boater of any kind, make sure you catch the closing fireworks ceremony of Kiel Week from the water.