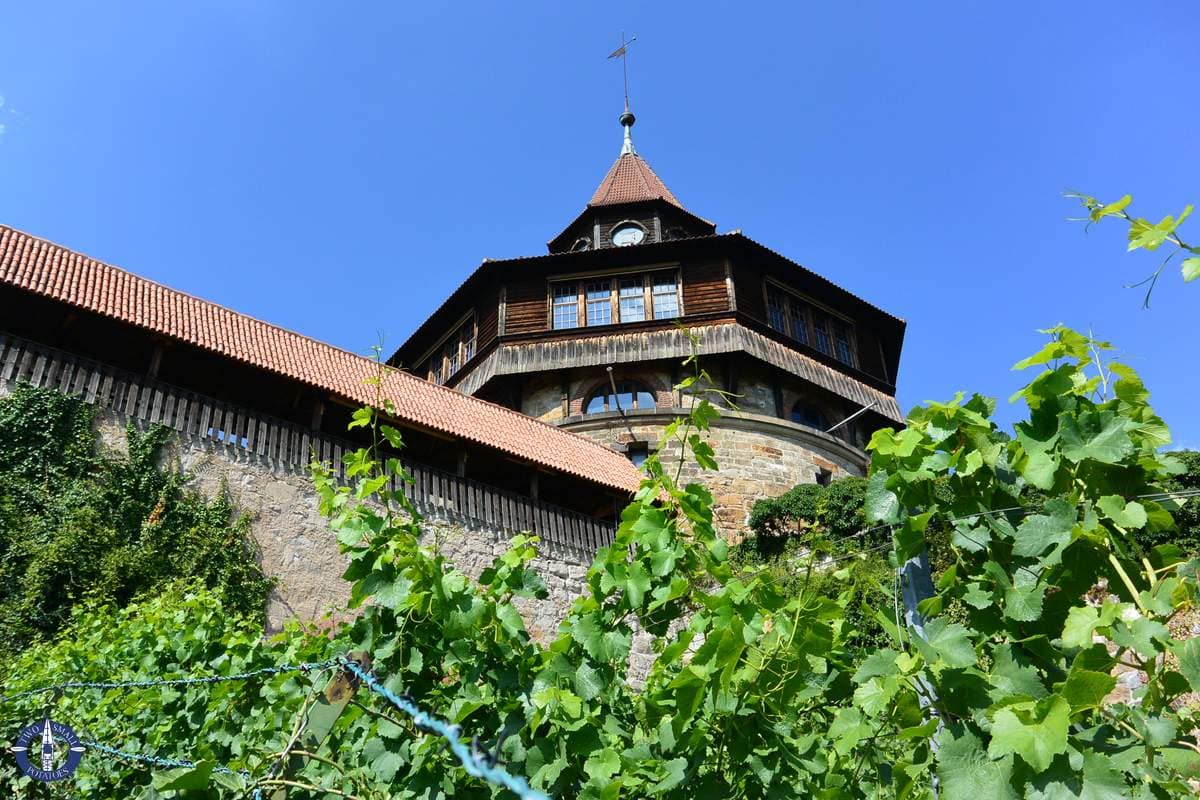 One Day in Esslingen, Home of Germany’s Oldest Sparkling Wine

Germany
August 5, 2015 0
*This site contains affiliate links. If you purchase through these links, we may receive a small commission at no extra cost to you. 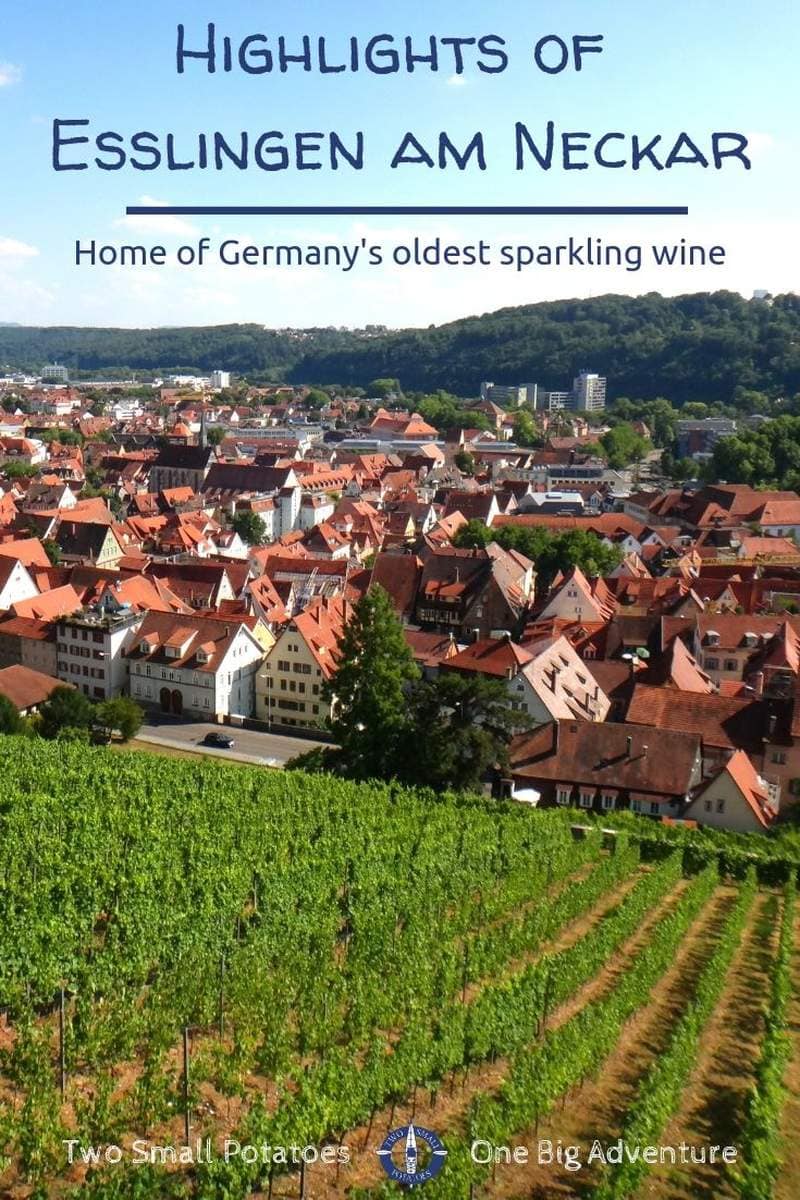 Those who find themselves in Esslingen am Neckar will quite possibly never meet anyone else who’s visited this particular town in Germany. Located on the outskirts of Stuttgart, it’s just a small, sleepy city built along the banks of the River Neckar.

Nestled among rolling green vineyards, Esslingen is home to Kessler Sekt, Germany’s oldest sparkling wine. Visitors can sample a glass, explore a hilltop castle, wander among medieval streets with charming half timbered houses, and savor decadent ice cream on a hot summer day. Best part is, you can do it all on foot in this pedestrian-friendly community of 95,000.

If you happen to be in Stuttgart and have a few hours to explore beyond the city, we have a few of our favorite things to do in Esslingen to get you started. You’ll undoubtedly find your own hidden gems as well.

Looking for a day trip from Stuttgart? Explore Esslingen am Neckar with its charming medieval houses, hilltop castle, and Germany's oldest bubbly. Click to Tweet

As with most of our favorite hidden discoveries, we found Esslingen by accident.

The day after meeting up with friends in Ulm where we climbed Ulm Minster, the Tallest Church in the World, Travis and I were driving home south to Switzerland. We were giving two of our friends, Alanna and Michael, a ride from Ulm to Stuttgart on our way home.

It would be a shame to drive from point A to point B without stopping at least somewhere in between though, so we decided to detour off the Autobahn. We spent the better part of a lovely summer afternoon exploring the town of Esslingen am Neckar with Alanna and Michael.

By car or train, it’s just 20 minutes from downtown Stuttgart to Esslingen. Once in town, we recommend exploring on foot.

Our first stop was Esslinger Burg, or Castle Esslingen.

The name is actually a bit deceptive since the site isn’t a right proper castle, but rather a fortress consisting mainly of fortified stone walls interspersed with watch towers creeping up the hill bordering town. Some manner of defensive site has existed on this spot for over 700 years, and locals still affectionately refer to the fortress on the hill as the “Burg.”

During our visit, it was hot – too hot.

We arrived while the site was being readied for a summer concert, which is apparently one of the Burg’s more common uses nowadays. Rows of folding chairs filled the central green and a huge screen was set up with speakers blaring a rather catchy but unknown-to-us pop song.

With little to actually do there, we finally found the entrance to the fortress walls and slowly climbed the stairs.

Acres of bright green vineyards shimmered in the summer heat.

The town consists mostly of cute, red-roofed houses and businesses, with your typical European abundance of churches.

One church stood out to us because of its twin spires connected near the top by a curious little walkway.

And too hot. Unless I have a piña colada in hand on a sandy beach or am about to go adventuring in the jungle, 90+ degree weather is not my shtick.

Grateful to leave the sweltering sun that was pelting the exposed hillside, we headed down into town.

Esslingen am Neckar is one of a handful of towns in Germany that once held the status of free imperial city. As such, they existed within the Holy Roman Empire with a considerable amount of autonomy, answering only to the Holy Roman Emperor himself.

These towns were typically wealthy and independent, declaring war or peace and moderating trade within their borders at their own discretion.

While some of the free imperial cities lost or relinquished their status over the centuries, Esslingen maintained its own until the 19th century.

In the early 1800s, current events led to significant restructuring of German territory, and Esslingen became part of Württemberg in 1802.

Esslingen happen to be one of the best places in Germany to see historic half-timbered houses. The town has over 200 of them with some dating from the 13th century.

Because much of the area was spared from bombing during World War II, many of the houses retain their original architecture.

One of the most beautiful buildings in town is the medieval Old Town Hall.

Built in 1422, the bright red building is an interesting mixture of half timbered architecture and Renaissance style.

The astronomical clock was added in 1592, and its figures come alive on the hour.

The most iconic church in town is Stadtkirche St Dionys, a Protestant parish church with Gothic architecture.

While Esslingen dates from the 8th century, the parish church is the third church to stand in its place. The first and second date from the 8th and 9th centuries, while construction on the current church building spanned from about 1220 to the mid-1300s.

Travel Tip: Visitors can tour a museum in the basement of the church. For opening hours and current info, visit the official site for St. Dionys Church (DE).

Though the church is notable for its stained glass windows, we didn’t go inside. We were happy just to explore the exterior.

Plus, we were searching for something better – something more refreshing, cool, and bubbly.

We were on the hunt for Kessler Sekt, the oldest sparkling wine producer in Germany!

Kessler Sekt was founded in 1826 by Georg Christian Kessler, a German who learned the art of making champagne while living in France.

At one time the co-owner of the famous Veuve Clicquot champagne house in Reims, he later returned to Germany to start his own company in Esslingen. Rather than imitating French wine products, however, he created unique sparkling wines that have been wildly popular for nearly 200 years.

Travel Tip: Visit the official site of Kessler Sekt (DE only) for current info about opening hours, tours of the cellar, etc.

If you’re an old movie buff and happen to like Errol Flynn, you might be interested to note he was a fan of Kessler’s sparkling wine (and probably drank too much of it).

In the early 1900s, Kessler was also the favored premium wine served to Zeppelin guests on board the airship’s flights. Obviously folks who could afford a ride on a Zeppelin could certainly afford a glass or two of Kessler premium sparkling wine.

Kessler even keeps the German government supplied with a steady stream of bubbly.

German government and bubbly are two words I wouldn't normally put together in a sentence. Click to Tweet

With only 30 employees, it’s incredible that this single cellar releases a million bottles of sparkling wine every year.

How many of these do you think are slated for government employees? Haha!

After winding our way through the narrow, cool streets of old Esslingen, the four of us arrived at Kessler Sekt.

We eagerly ordered several varieties of sparkling wine, passing around the glasses for sampling.

Travis, who much prefers dark, thick, unfiltered beer, passed up Kessler’s wine options in favor of a simple Coca Cola.

Though I admit the bubbly was delightfully cool and refreshing after a wickedly hot day traipsing around the Burg, it is not and likely never will be my drink of choice. Deciding to try one of their cocktails, I settled on a signature drink with a mixture of hard liquor spiked with Kessler sparkling wine.

Lo and behold, it was delicious!

Travel Tip: If you’re not a fan of champagne or lean more toward hard liquor, try one of the house cocktails. They offer mojitos, cuba libres, and even a signature cocktail that resembles a Long Island Iced Tea but has Kessler wine.

We lounged for a bit on their outdoor patio, returning several times to sample different varieties before meandering back toward our car.

Considering the plenitude of ice cream parlors in Esslingen am Neckar, it would be a shame not to sample some local flavors during your visit.

We opted to try the newly opened Eiscafe Dolomiti.

Settling in at an outdoor table where we could enjoy the quaint street and adjacent church, I waited in anticipation for my coffee milkshake. I’m a total java junkie, so it was an obvious option since it was one of the few items on the menu with coffee.

Eiscafe Dolomiti looks across at this quaint little church.

When it arrived, I was far more impressed with Trav’s tasty berry sundae.

Because I had it, and I had it bad.

Next time we’re at an Eiscafe Dolomiti, I know what I’ll order.

Quite content after a day of fortress exploring, wine sampling, and ice cream indulging, we dropped off Alanna and Michael at their friends’ apartment in Stuttgart.

Pointing our t*rusty* VW south, we drove home through the Black Forest, enjoying the pungently cold and clean forest smell well into the night.

Insider Tip: Those visiting Esslingen in winter shouldn’t miss the Esslingen Weihnachtsmarkt, or Christmas Market. With both a traditional market and a medieval market, it’s one of the largest and most popular Christmas markets in the region.