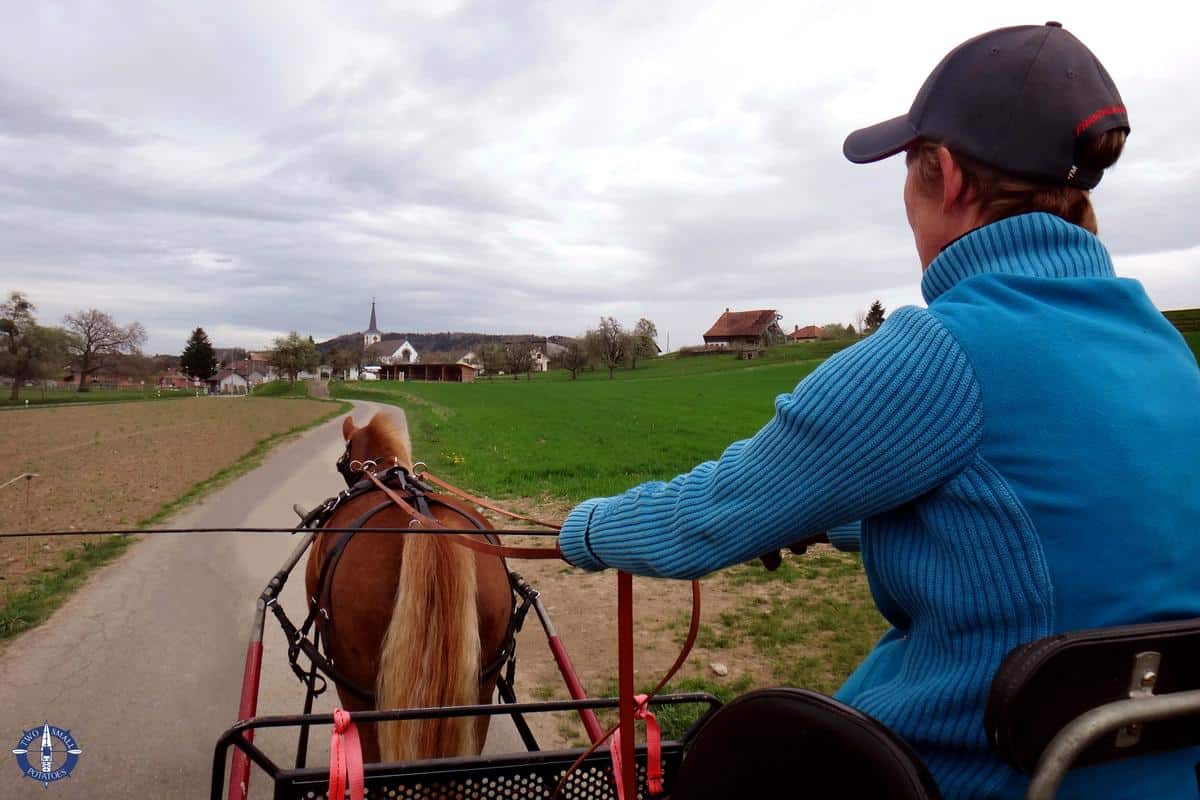 I’ve noticed time and time again that things in French sound more appealing than their English equivalent. For example, Ecuries du Châtaignier is so much more romantic and mysterious than “Chestnut Stables,” which is still a perfectly nice name for a riding center. It just sounds better in French. It also happens to be where I had the chance to go horseback riding in Switzerland for the first time!

When Trav and I returned from our 10-day road trip to Spain, I had a text message waiting for me from Christine, a gal I met while walking in the woods this past winter. She also was back from vacation and had invited me to go horseback riding with her that week. Was I interested?

As Travis would say,

Does a bear poop in the woods?!

We then exchanged a series of texts – hers in French, mine in English. We agreed to meet jeudi dès 13h au manège, en bas du village. Simple enough. We’d meet on Thursday at 1 pm at the armory at the bottom of the village.

Then I realized I had no idea where the armory was or what the “bottom of the village” meant. Or which village, since she lives in a neighboring town. I didn’t even know if we were meeting at someone’s house or a riding stable.

I asked her the name of the place so I could search for an exact address, and she confirmed we’d be meeting at Ecuries du Châtaignier, a horse boarding and riding stable in Prez-vers-Noréaz just down the hill from our house.

Location of Chestnut Stables in Switzerland

Getting Lost on the Way to the Stables

I knew the hill and which stables she meant. Trav and I have walked all over this area checking out back roads – though to be fair, all the roads near us are “back roads.” During one of our walks, we’d passed barns with riders on incredibly beautiful horses coming and going.

I checked the map on the business website for Ecuries du Chataignier and confirmed it was in Prez-vers-Noréaz. (At the time of this writing, the map wasn’t very accurate. It is now.)

Arriving early at the place I had in mind, I asked around for the owner by name but received only blank stares and apologies in French. Showing a gal the name of the stables from my text message, I handed her my phone. She mapped to a location that was way off in another village entirely. I was bummed, knowing I was sure to be late.

Setting off for the destination she’d routed on my map, I had driven no more than a kilometer when I pulled over. It didn’t seem right. I turned around and headed back up the highway.

Passing another horse barn, I swung in; this time, someone there drew me a simple little map to the horse stables, which was apparently just up the road in the direction I was heading.

I thanked her profusely and arrived at the stables a few minutes later.

Christine was standing in the parking area worriedly looking up the highway. Frustrated that I had even left extra time so I could be early and was still late, I was grateful when she brushed away my apologies and assured me we could still go riding if I was up for it.

I didn’t care that dark clouds threatened rain or that the wind was kicking up. I wanted to ride! It’s not every day that you have the chance to go horseback riding in Switzerland.

My Experience Riding at Chestnut Stables

Christine introduced me to her friend, Antoinette, who would be riding with us, then led me to my horse for the day, Willow.

Far larger and more muscular than your average horse, he was a beauty with thick feather, an underbelly of long hair, and crystal blue eyes.

If you know what an emperor tamarin looks like, imagine one of those little mustaches on a horse and you can imagine Willow’s.

The ladies told me he was an Irish Cob, a horse that was bred in Ireland and used for pulling wagons, for dressage because of their elegant gait, and for student riders because of their calm, gentle nature.

Fun Fact: In the US, Irish Cobs are known as Gypsy Vanners.

It wasn’t until we tacked up the horses that I realized we’d be riding English.

I grew up riding Western, but the English style is far more common in Europe, and English tack was all that was available at the stables. I’d only tried English riding once before and it’s definitely outside my comfort zone, but I figured I’d give it another go.

Christine gave me a helmet, which felt alien compared to my customary cowboy hat, but when in Switzerland…

I gave Willow a good brushing and watched while Christine saddled him, taking note of how she did it so I could do it on my own next time.

Once we were all geared up, I followed the ladies as we led our horses across the highway and up a paved country road to softer ground for their unshod feet. Two large wooden mounting blocks were conveniently placed there for us. We mounted up and set off for an extended ride through the woods and fields.

Despite the wind that kicked up and the rain that blew in our faces, it felt wonderful to be back in the saddle – any saddle.

Zigzagging from one forest trail to the next, we finally looped back to the stables.

Christine then gave me a tour of the barn, outdoor arena, and stables. We finished caring for the horses – putting away their tack in the barn, feeding them, wiping them down, and mucking out stalls – and then unfortunately Christine had to leave.

I thanked her for the fun and very unexpected afternoon of riding and said goodbye.

A Carriage Ride with a Freiberg Horse

I was getting ready to leave as well when Antoinette introduced me to her husband and offered to take me for a carriage ride next. Um, oui!

I’ve never been in a horse-drawn carriage before, so it definitely was a day of many firsts for me. This ride was extra special too since this was my introduction to a horse breed I’d never even heard of.

I watched as Antoinette and her husband started gearing up his horse, a Franches-Montagnes. Her husband explained that the breed is the only horse breed native to Switzerland. They’re also called Freibergers or Freiberg horses, named for the region where they originated some 200 years ago.

As they worked, I held an occasional bar or strap for them.

They explained the history of the breed, its notable characteristics as a working horse, and the rigors of the training he received from the breeder, training that continues with them.

Though not terribly large, Freibergers were bred as small draft horses for pulling heavy loads, as well as for riding. They’re muscular, yet gentle, calm, and very trainable.

They are very much like the Swiss people…Down to earth, stable and friendly.

Gerhard Fux, instigator of the petition to save the National Stud

Interestingly enough, the Swiss National Stud is a federally funded equestrian center in Avenches, a village less than 20 kilometers from our house in Fribourg. Their focus is horse training, breeding, and the continuation of the genetic line of the Freiberger horse. This has come under threat in recent years as some locals wish to reduce or abolish the National Stud in an effort to save money.

When the carriage was hitched up, Antoinette took the reins and directed me to step up.

We set off down the main highway to the clickety clack of hooves as cars patiently waited behind us before Antoinette turned into the fields.

I still felt like it wasn’t quite real that I was riding in a horse-drawn carriage through the Swiss countryside.

Our trip was cut short by a herd of cows being driven to a new pasture, effectively closing our intended path. So Swiss!

Since the cows have been absent from our fields for the winter, they were actually a welcome sight, harbingers of spring and adventure-filled days to come.

Even after returning to the stable, I lingered.

I enjoyed talking to Antoinette and just being part of the “horse scene” for the first time in ages. We weighed out hay for the horses, secured them back in their pastures, and exchanged information before leaving.

I realized I’d been there for over 5 hours, which had passed in a flash. Antoinette said they often take carriage rides with other friends and that I was welcome to join them next time.

I can’t wait to go horseback riding in Switzerland again!

Expat Tip: Ecuries du Châtaignier offers a range of services, from horseback riding in Switzerland and full horse boarding to both group and private lessons. They even have ponies you can “rent.”

These posts have more cute animal encounters in Switzerland.