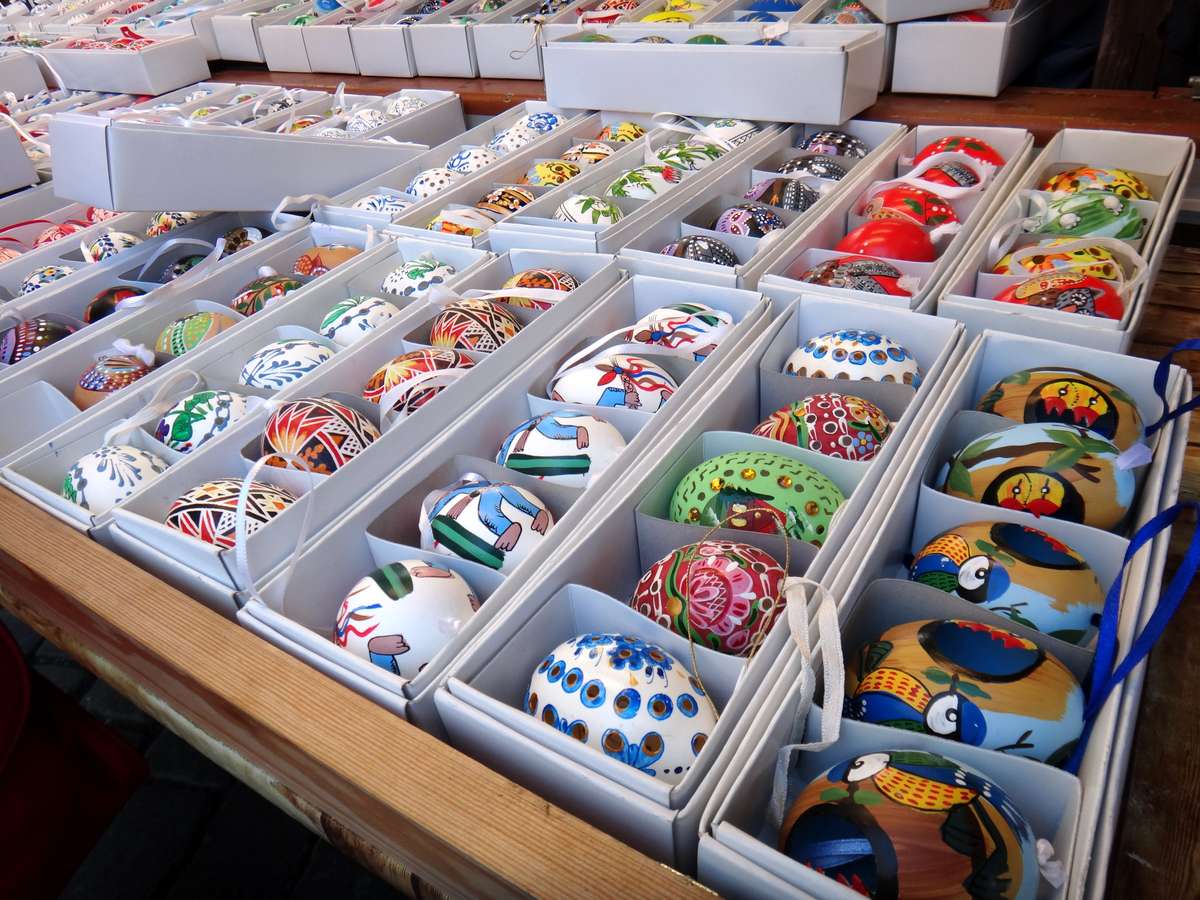 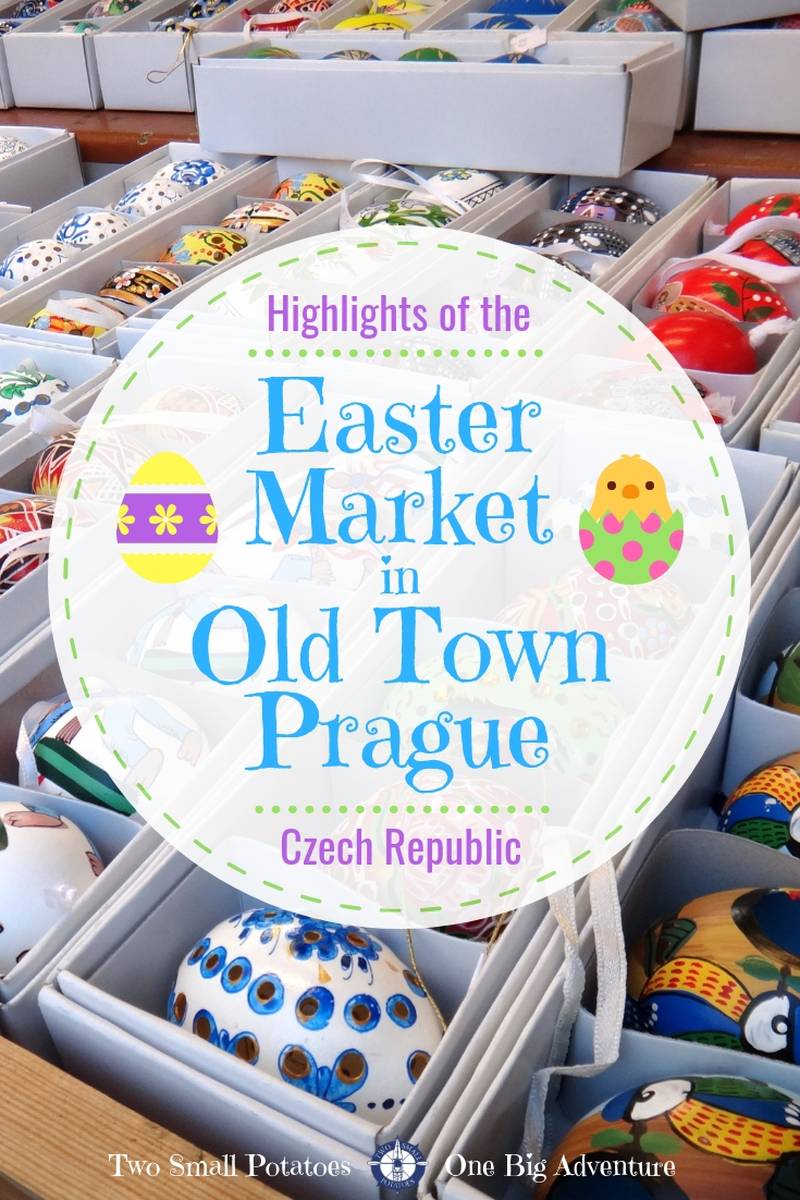 Travis and I are outdoor folks at heart, so sometimes it’s hard for us to get excited about visiting big cities.  Despite having really cool attractions to see, a big city trip requires a level of planning we’d rather avoid: the necessity of pre-booking accommodations, figuring out public transportation in an unfamiliar city vs. the convenience of driving, visiting popular attractions with thousands of others in a constant crush of humanity, and the dilemma of what to do with our dog when she’s with us and we have a mixed itinerary – some sites dog-friendly, others not. Sometimes the stress alone of just planning a city trip leads us to procrastinate right out of going!  The problem is that so many of the best things to see in Europe are in cities.  This year, we found out about the annual Easter event held in Prague.  The city was already on our bucket list because of a number of unique things to do in Prague, so the promise of additional holiday festivities motivated us to head to Prague for a long Easter weekend.

Our first tip is to book your lodging well in advance!  Spring is still off-season for travel to the Czech Republic, but the Easter festival draws a huge number of visitors.  Most of them want to stay in or near Old Town, which is where the main Easter Market takes place.  Budget accommodations are snapped up quickly, leaving mostly overpriced and luxury rooms available for booking.

Since we didn’t book lodging in advance, we stopped at Triocamp when we arrived in Prague.  A campground and RV park on the outskirts of the city, it was perfect for our needs – cheap, quiet, dog-friendly, and right on the bus line to Prague.  We booked it for several nights with plans for it to be our home base.  We could take day trips from Prague from there, drive into the city, or leave our car parked at the campground and bus in.

Want to save money on lodging in Prague? Consider tent camping or booking a cabin at Triocamp. It only costs about $20 per night, and it's one of the few campgrounds that's open in March. Click to Tweet

If you’re able, plan on spending at least two entire days exploring Prague, especially if you want to visit the Easter Market. One day will allow you to explore Old Town and the attractions listed in this post.  We recommend spending Easter itself at Prague Castle.  See our post about Prague Castle for useful travel info about where to park when visiting the castle and other attractions not to miss in the area.

Keep in mind that if you’re driving to Old Town Prague, traffic can be challenging.  The city has several parking garages that are a short walk from Old Town.  We recommend parking your car there for the day and exploring the city by foot.

Needless to say, we were relieved and extra excited to finally reach the parking garage.  We walked the few blocks to Old Town, then spent the rest of the day immersing ourselves in the festive sights and sounds of the Easter Market. These are our favorite highlights.  Make sure not to miss them during your holiday visit to Prague.

The most famous attraction in Prague is probably the 600-year-old Prague Astronomical Clock.

Built in 1410, legend says that the Imperial clockmaker, Mikuláš of Kadaň, was blinded after he finished the clock so he couldn’t recreate it.  One hundred years passed before another clockmaker was able to repair the clock.  It has since survived wars, uprisings, and fires, including an attack by Nazis in 1945 that left the Old Town Hall virtually destroyed.

The clock is located on the southern wall of the town hall.  Every hour between 9 am and 11 pm, visitors gather to watch the 12 apostles begin their procession to mark the passage of time.

2. See the Oldest Organ in Prague

Immediately across the square from the Prague Astronomical Clock is the Gothic Church of Our Lady Before Týn.  It towers over the numerous booths that vendors set up every year for the Easter Market.

The church is home to the oldest pipe organ in Prague and dates from the 17th century.

3. Listen to the Bells of St Nicholas Cathedral

Another massive cathedral, St. Nicholas’, squares off with Our Lady before Týn – because one imposing cathedral in a square is never enough.

The star of the Easter Market, though, are the delicately painted eggs laid out in tidy rows of white boxes.  Known as kraslice in Czech, they’re made with everything from bee’s wax and straw to onion peel and watercolors.

The spicy scent of trdelniks cooking over a bed of hot coals fills the air.  Not even the strongest will power can resist ordering one of these sweet desserts.

Trdelniks are a sweet pastry – a spit cake made of dough grilled around a wooden stick and brushed with sugar and often crushed walnuts.

If you love them, you’ll be pleased to discover they’re not exclusive to Prague, or even the Czech Republic.  In fact, it’s believed that trdelniks originated in the Hungarian-speaking part of Transylvania, Romania, where they’re known as kürtőskalács.  Since they’re heavily marketed to tourists, you’ll often find them across Central Europe at popular tourist attractions.

6. Sip a Hot Glass of Medovina

The mulled wine is similar to what you’ll find elsewhere in Europe.  Known as Glühwein in Germany, you’ll see it as Svařák in Czech.  Typically it’s made with red wine, cinnamon, cloves, and sometimes a little sugar.  It’s my personal favorite!

Czech hot “punch” is another alcoholic beverage that’s popular during the colder months in Prague.  It’s similar to mulled wine but also has either fruit or fruit juice and liquor, often rum or brandy.

Medovina is a type of mead – an alcoholic drink made by fermenting honey and water. Sometimes it’s flavored with vanilla, spices, or fruit juice.  Some stands offer free samples, so if you haven’t tried it and aren’t sure you’ll like it, ask for a small taste.  Stands that sell medovina also often sell jars of honey.  Consider buying a jar to support the local honeybee farmers.

7. Pet a Goat at the Petting Zoo

Beneath a tree hung with brightly colored Easter balloons, a petting zoo is set up with a handful of farm animals.  It’s really popular with the kids, but animal lovers of all ages enjoy it.  Give the friendly goat a scratch and laugh at the roly poly pony.

8. Walk Over the Charles Bridge

Following the curve of the Vltava River where it snakes through Prague, you’ll reach the Charles Bridge Tower at the entrance of Charles Bridge, then the famous bridge itself.  It’s not far from the Old Town Square.

Standing since the 14th century, the bridge was once a path for kings during coronation.  Some say that the architect in charge of building the bridge mixed eggs in with the mortar for extra strength.  Before the construction of the Charles Bridge, another had stood in its place for nearly 200 years.  It was destroyed in a flood in 1342.

Visitors can climb both of the towers on either side of the bridge for views of the city and the river.

9. Enjoy the Sunset Over the Vltava River

The waterfront is a superb place to watch the sunset.  For the best views of the Vltava River and Prague Castle beyond, stake out a spot along the east bank of the river just north of Charles Bridge.

If you have the chance to visit Old Town Prague during the night and night, we highly recommend it.  Even more, the square is transformed at night, more closely resembling what it might’ve been like hundreds of years ago.  In particular, the Church of Our Lady before Týn is lit up in Gothic splendor.

During Easter weekend, Old Town is a great place to track down dinner from one of the many food vendors.  The rest of the year, restaurants offer endless options for visitors.

12. Indulge in a Fish Pedicure

If you’re exhausted from exploring all the Easter festivities, you can treat your feet to a fish pedicure.  They’re banned in a handful of US states due to safety concerns, but they’re growing in popularity across Europe and Asia.

We didn’t try it, but this pair clearly seems to be enjoying themselves!

While this list includes all the best activities near Old Town over Easter weekend, it’s missing several of the best things to do in Prague.  There simply isn’t time to see and do everything in one day.

For those interested in spending Easter Day at Prague Castle – sampling “stuffed chimneys,” visiting the magnificent St. Vitus Cathedral, and trying to dodge your first bona fide Czech spanking – you’ll want to read our other post about Easter at Prague Castle.

Yes, you read that correctly.

Looking for other cool things to do near Prague?  Don’t miss a visit to the village of Kutná Hora.  It’s just an hour away by car.  While there, pay a visit to the macabre Sedlec Ossuary, Church of Bones and the magnificent Cathedral of St. Barbara, patron saint of miners. 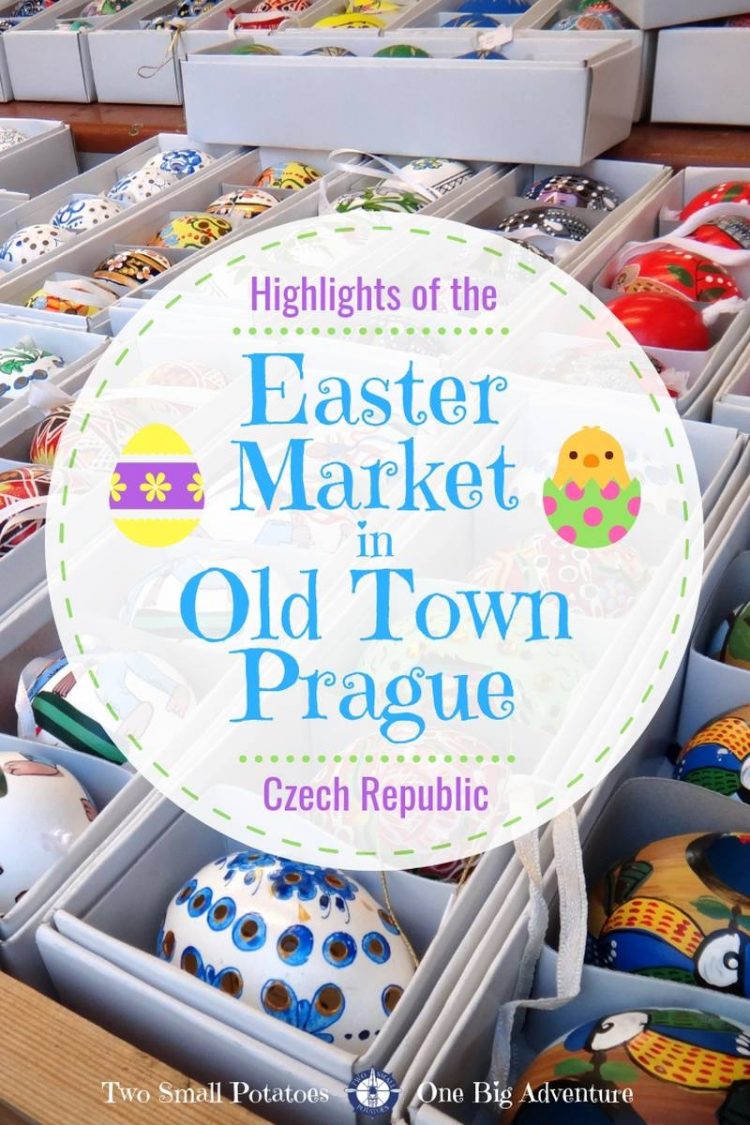