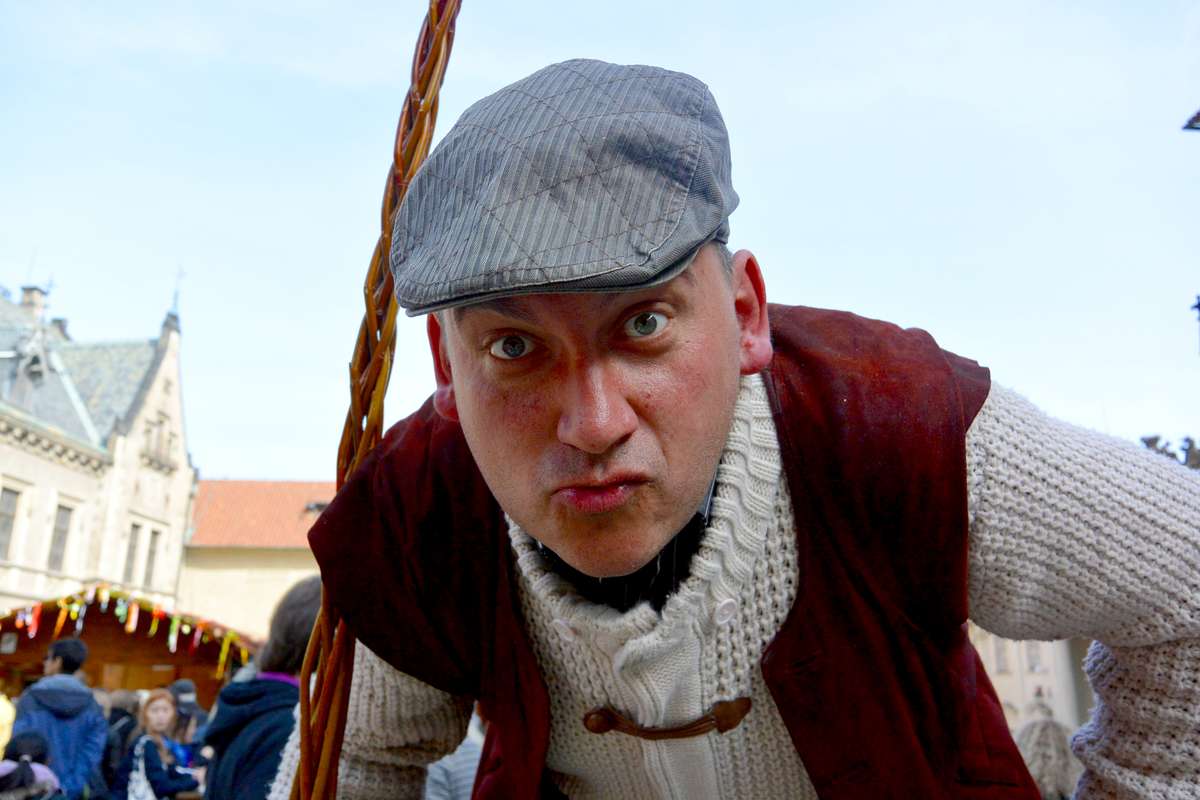 Czech Republic
March 27, 2016 0
*This site contains affiliate links. If you purchase through these links, we may receive a small commission at no extra cost to you. 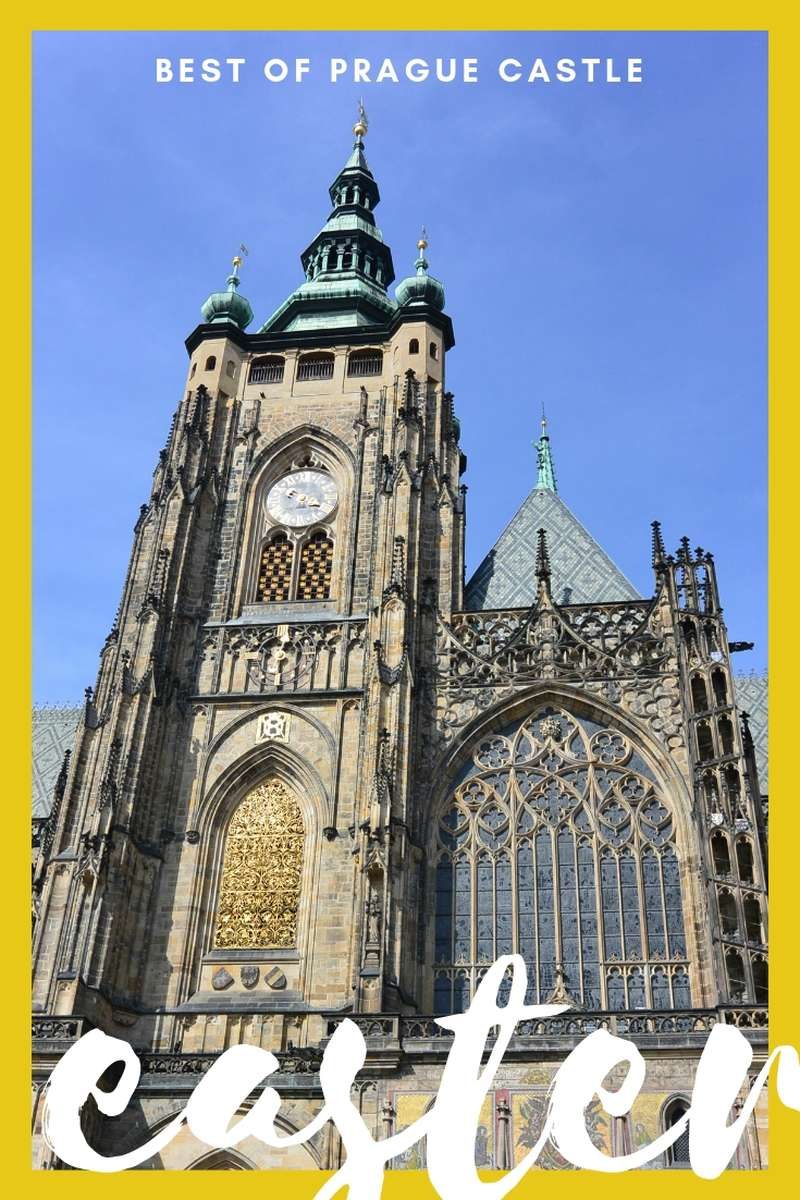 Did somebody say blue skies at Prague Castle on Easter?!

Like someone had flipped a light switch, we awoke Sunday morning at our campground in Prague to a very different world from the morning before. Absent was the pitter-patter of rain on our tent fly and gloomy light that barely filtered through the canvas.  Instead, a circus of birds chirped merrily in the trees and children giggled outside, riding scooters while their families packed up their RVs. Throughout the night, we’d slowly shed clothes inside our toasty sleeping bags as the falling temperature seized at a comfortable number. The night before, I’d slept with my woolen hat pulled all the way down to my nose for warmth. Without it, I could tell before opening my eyes that the sun would accompany us for Easter festivities at Prague Castle.

A hot shower and breakfast of homemade blueberry muffins later, we headed into the city in search of Parkoviste Malostranské Náměstí, a public parking area we hoped would be available. With only 74 parking spaces and less than a 5-minute walk to the castle complex, I imagined it would be packed on Easter Sunday. Driving back into the beast of downtown Prague, we slowly navigated through the mobs of pedestrians, tourist carriages, and old-timey cars for rent.  Incredibly, we eased right into a parking space in the lot just minutes before the car behind us filled the last available space.

We were greeted at the western entrance of the castle complex by a local band performing rousing ditties in Czech, much to the enjoyment of the large crowd gathered in the square.

Unlike castles such as Germany’s Neuschwanstein which have a fairly traditional “castle look,” Prague Castle is quite different.

Sprawling over 70,000 m², it’s recognized by the Guinness Book of World Records as the largest castle complex in the world.  Yet the site lacks an actual “castle,” instead built around the Gothic masterpiece, St. Vitus Cathedral, which towers over the rest of the complex and is easily mistaken for a castle.

Galleries, museums, shops, and too many palaces to count make up the rest of the complex, including parliamentary buildings for the country’s government, which still functions on site.

The crowning masterpiece of Prague Castle is undoubtedly St. Vitus Cathedral.  After passing through the small set of doors into a courtyard, the Gothic cathedral abruptly rises up out of the stone.

We were both rather surprised to find it so tightly hemmed in by surrounding buildings on all sides, leaving minimal space to step back and truly enjoy it from a distance.  All once can do is stand directly beneath it and stare straight up at its blackened walls and inky, arched windows.

Trust me when I say no matter how many stunning Gothic churches you’ve seen, St. Vitus is still sure to impress.

One of the most charming things about visiting Prague Castle during Easter is seeing the brightly colored decorations festooning the central square.  Vendors sell hand-painted eggs like the ones at the Easter Market in Old Town Prague.

And now for the best and most surprising experience at Prague Castle – an Easter whoopin’!

While hanging out in the central square near St. Vitus Cathedral, a man precariously balanced on stilts with rubbery bare feet entered from a side street.  Camera raised for a photo, I realized my mistake when our eyes connected and he froze.  I suddenly felt like the naive student who foolishly makes eye contact with a teacher after they ask for “volunteers.”

Snapping the camera to my side, my heart sank as he bent low and slowly but purposefully bobbed straight for me on his springy stilts high above the crowd.  Stopping directly in front of me, he stooped down and fixed me with an intent stare.  Assuming he was just hamming it up for a tourist’s camera, I snapped a photo in relief, then smiled and thanked him, turning to leave.

Without a word, he shook his head deliberately and gently drew me forward, motioning for me to follow him out into the square.

What was this all about?

I had no idea.

From his hand dangled a long, wooden-twined stick draped with bright streamers at the end.  As he let it droop near me, I mistook this for an offering and attempted to take it.

Still silent, he wagged his finger at me.  Then, lining up my bum with the end of his stick, he proceeded to dispense an old fashioned whoopin’ – albeit a tourist-friendly, non-lawsuit-type-of spanking that left me thoroughly confused and breathless with laughter.

Really, what was this all about?!

Gratefully returning to Trav’s side, I looked at him in bewilderment.  Eyes burning with laughter, he clearly knew what was going on.

Right before our trip, a Ukrainian friend in his lab had told him about this particular Eastern European tradition.  Typically on the day after Easter, it’s customary for men with braided willow “whips” called pomlázka to “spank” women with them.  According to this tradition, presumably I’ll keep my “health, beauty, and fertility the whole next year.”

There’s nothing like a good spanking to work up a hearty appetite.  Drifting toward thick curls of smoke curling from several huge grills, slow-roasted rotisserie ham sizzled and fumed over coals.  Other vendors offered potato pancakes, Easter meatloaf, fruit shakes, and sweets.  Unable to resist the enticing smells, we dined on street food – a delicious lunch of ham and bratwurst.

Dessert, though, was a near heavenly experience.

The traditional doughnut-like spit cake known as a trdelník has a new and very much improved cousin that’s been spreading like wildfire.

Originating in Prague, it’s called trdlo plněné, or “chimney cake.”   Pastry dough wrapped around a cylinder is roasted over open coals, brushed in sugar, cinnamon, and/or crushed walnuts, and then filled with Nutella, berry compote and whipped cream, or fresh fruit and ice cream.  The idea is an absolutely brilliant take on an ancient recipe.

If you want to see more of Prague (and walk off dessert), leave the castle complex and head toward the Vltava River. Stroll across the famous Charles Bridge over the Vltava.

Here, a throng of tour boats navigates the narrow locks.  Book a tour for a view of the city from the river, or just admire the boats from shore.

Any Outlander fans out there?

The second season of the TV show (based on Diana Gabaldon’s book series) is set in Paris, but filming was done in Prague.  Many of the scenes were filmed on Kampa Island and near Charles Bridge.  Hardcore fans might recognize scenes from the show while wandering along the Vltava near Prague Castle.

If you like bizarre or controversial art, another site you might find interesting is the Crawling Babies.

They’re the work of David Černy, an internationally acclaimed artist from Prague.  Located on Kampa Island at the entrance to the Kampa Museum, the installation consists of three huge metal crawling babies with bar codes for faces.

What do they signify?

Your guess is as good as ours!

Further south, the Dancing House comes into view across the Vltava.  Added to the waterfront in 1996 on a vacant lot, it stands out considerably from the neighboring buildings with their distinctly modern architecture.

The buildings that previously stood there were destroyed in 1945 by US bombers who intended to hit Nazi forces in Dresden.  Instead, because of poor weather and instrument error, pilots carpet-bombed Prague, leveling homes and historical buildings and killing over 700 – all civilians.

Following a string of small islands in the Vltava, you’ll arrive at one of the prettiest places along the river: Dětský Island.  With a red-roofed tower standing guard over a little park and quiet waterways ebbing and flowing through the locks, it’s perfectly peaceful.

If you’re ready to hit the woods for some stellar views over Prague, veer away from the Vltava River and angle through the city streets toward Petřín Park.  Sprawling along a hill above the city, the park is an impressive network of beautiful trails, wooded slopes, and an assortment of attractions.

Somehow we managed to climb for nearly an hour next to a fantastic 14th-century castle wall without taking a single photo.  The sun just felt so nice, our dog was finally free to romp along the trails, and we both breathed more deeply, briefly free from the hubbub of the city below.

By the time you descend from the park, you’ll probably be more than ready to relax with a beer.  Luckily, Prague is the perfect place for that!  Stop by any store or pub for an impressive variety of Czech beers.

Not a fan of beer?

You might prefer Becherovka, a classic Czech herbal liqueur which is bitter rather than sweet. It was first sold in 1807 as a cure for ailments of the stomach.  If you haven’t tried it before, steel yourself – for some, it’s an acquired taste.

Another rather unique alcoholic drink you might want to try is White Widow Cannabis.  It’s essentially marijuana vodka.  But don’t worry – it doesn’t actually contain THC.  Instead, the reefer flavored drink has marijuana aroma and flavor added to it.

With brew in hand, it’s sure to melt away any last sting from your Easter spankin’ at Prague Castle.  In its place, you’ll be left with funny memories and a good story to tell your friends.