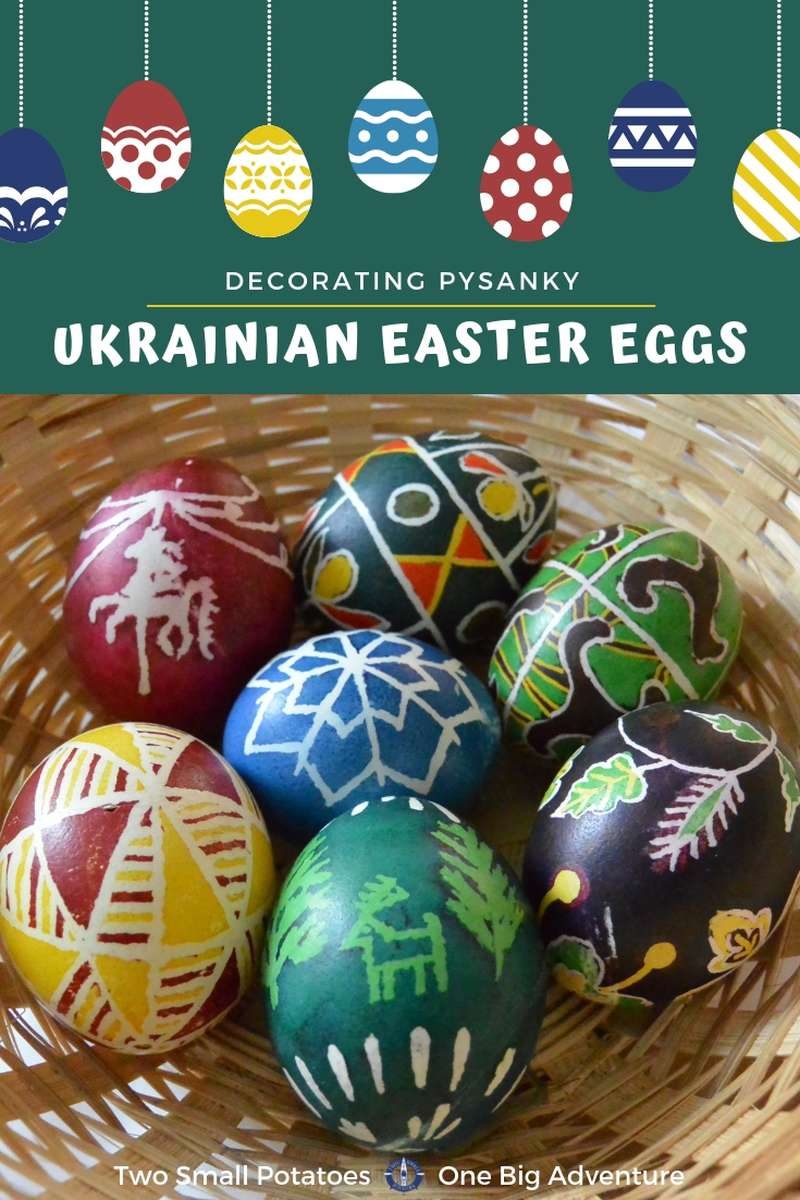 As Americans, we’ve always celebrated our Easter holiday toward the end of March or some time before April 24th. This year, the holiday arrived quite early, on March 27th.  It was a long weekend, so we headed to the Czech Republic and spent Easter getting spanked at Prague Castle.  We had a fantastic time, but I still felt a bit like we’d missed Easter once we returned to Germany.  We’ve spent many holidays separated from family, but we always cook up a feast on Easter Sunday, share the day with friends, and often decorate eggs, even when it’s just the two of us. Luckily, this year we had a second chance to celebrate the holiday when some friends invited us to participate in a traditional Ukrainian Easter, complete with decorating pysanky – Ukrainian Easter eggs.

Easter in Ukraine is celebrated on May 1st. The date is fixed according to the Orthodox Christian Church and is based on the ancient Julian calendar.  This differs from ours, which is not date-specific but rather is marked by the lunar cycle and always falls on the first Sunday after the full moon.  This typically occurs around March 21st.  So on Easter Sunday according to the Julian calendar, Travis and I eagerly hiked up the hill to our friends’ flat.

Before our arrival, our Ukrainian friends started their day on Easter by attending church, as per tradition.  Preparing their Easter meal in advance, they neatly arranged it in a basket and took it to church with them.  There, the food was blessed by a priest.

By the time we arrived at their home at noon, the dining table was laid in readiness.

Laden with sweet and savory breads and platters of meat cutlets, the main platters were flanked with spreads like truffle butter, pesto sauce, and a homemade beet and horseradish spread that was quite mild.  I don’t care for horseradish, so I was surprised to find it unoffensive.  Travis, on the other hand, loves the stuff.

My favorite part – besides stuffing ourselves silly – was peeling the scrumptious but painfully tiny quail eggs included for the occasion.

It takes forever to peel a single quail egg!

After we’d enjoyed our lunch, it was time for our first attempt at making pysanky – Ukrainian Easter eggs.  Not at all like our easy American “just-dip-the-egg-in-dye” technique, pysanky are made with melted wax and pigments.  It’s truly an art that requires considerable skill.

Also unlike American Easter eggs which are hard boiled, you’ll want to use empty egg shells and prepare them in advance.  For ours, Travis had used a syringe with a fine-tipped needle to poke a hole in each end of our flat of eggs to suck out the contents.  With painstaking patience, he then flushed each with alcohol and let them air dry.

Except for the possibility of being crushed, the completed eggs don’t have an expiration date.  They can be used to adorn Christmas trees, window sashes, or spring shrubbery during the Easter holiday for years to come.

Easter is celebrated on May 1st in Ukraine. Learn what you need to make beautiful pysanky - traditional Ukrainian Easter eggs. Click to Tweet

The basic tools you’ll need are your hollowed out eggs, beeswax, a candle to melt the wax, and a special pickax-shaped tool used to “draw” on the egg with the melted wax.

Laying out the tools before us, our friends explained the technique.

Cutting off a small chunk of beeswax, they showed us how to place it into the top of the bizarre pickax-shaped painting tool and hold the narrow bottom portion of the tool over the candle flame.  After a few seconds, the wax began to melt.

They showed us how to draw, with wax, any portion that we didn’t want to be stained with the first round of dye dipping.  The wax protects the egg from absorbing the color, so any area with wax won’t take on the color of the dye when you dip it.

Once we understood the basic technique, we each picked a pattern from a stack they provided for us.  Always drawn to symmetrical and geometric patterns, Trav chose one that looked rather complicated to me.  I settled on a pattern in green and blue, two colors I love together, that didn’t look terribly difficult.

Turns out, I was wrong.  Quickly realizing that the sunburst of small wax rays at the top and bottom of the egg were next to impossible to keep even, I abandoned the original pattern and struck off into the unknown.  Several trees (species uncertain) and one semi-traditional Ukrainian themed deer later, my egg was ready for its dye bath – first green, then blue.

Dropping my egg in a bath of beautiful deep cobalt, I left it to darken.  Returning to fish it out, I wiped it off in broad swipes on one of Trav’s white t-shirts I’d worn.  It’s now my new favorite pseudo tie-dye shirt.

Wear an apron or clothes that can get “ruined” if they get dye on them.

The others worked on their eggs, clearly far more skilled than the two of us.  With my first egg finished, I started another of a pink carousel horse and finally a blue and white one with a white snowflake to add to our Christmas tree this year.

The Angler finished first one egg, then two.  I have no idea how many he and MK completed.

All the while, Travis labored carefully over his single egg.

Perfection takes time, after all.

By the time it was finished, he’d added one initial layer of wax – which would remain white where he’d drawn; dipped his egg in yellow to create his base color; added a second layer of wax to cover what he wanted to remain yellow; dipped his egg in red; put it in the oven on low heat to soften the wax; then wiped off the melted wax in the end with a napkin to see the completed egg.  It  had a fun white, yellow, and red geometric pattern filled with intricate lines.

Beaming with pride, Trav returned to the dining table triumphantly, holding up his egg for us to see.

Turns out, though, that warm eggs with wax residue on them are a bit slippery.  As he held up his egg, it slipped from his hands and hit the floor, cracking completely in half.

Over five hours of painstaking attention to detail, painting lines and melting wax, broken in a split second.

Travis didn’t let it get him down, though!  Within seconds, he and MK had come up with a plan to fix his egg.  MK carefully spread glue around the exterior, then waited while it dried.  When she was done, it looked good as new.

Shadows were creeping into the yard by that time, and we realized we had probably overstayed our welcome. Gathering up our things, our dog, and our tray of colorful pysanky, we thanked our hosts for the fun afternoon and headed home in the warm evening sunshine.

As we walked, I soaked up the flowers in every shade of the rainbow sprouting from yards lining the crooked and curvy cobblestone streets in Nikolausberg.  A gal in English riding gear passed us, leading a dapple grey horse down the middle of the quiet street.  An elderly gentleman nodded hello, then passed with his unleashed dog following closely on his heels as so many of the dogs here seem to do.

Moments of complete happiness creep in when you least expect it in blissful rays of summer sunshine and an afternoon with friends.