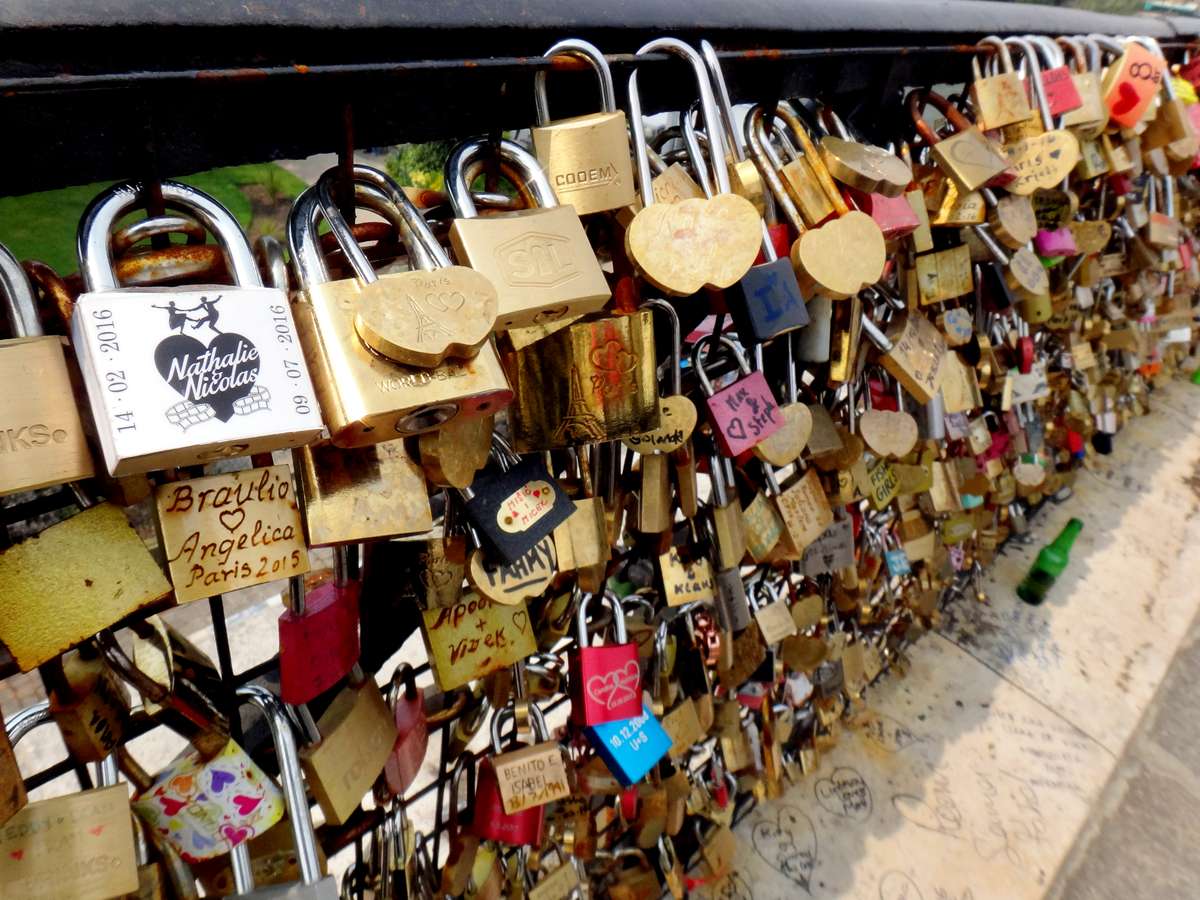 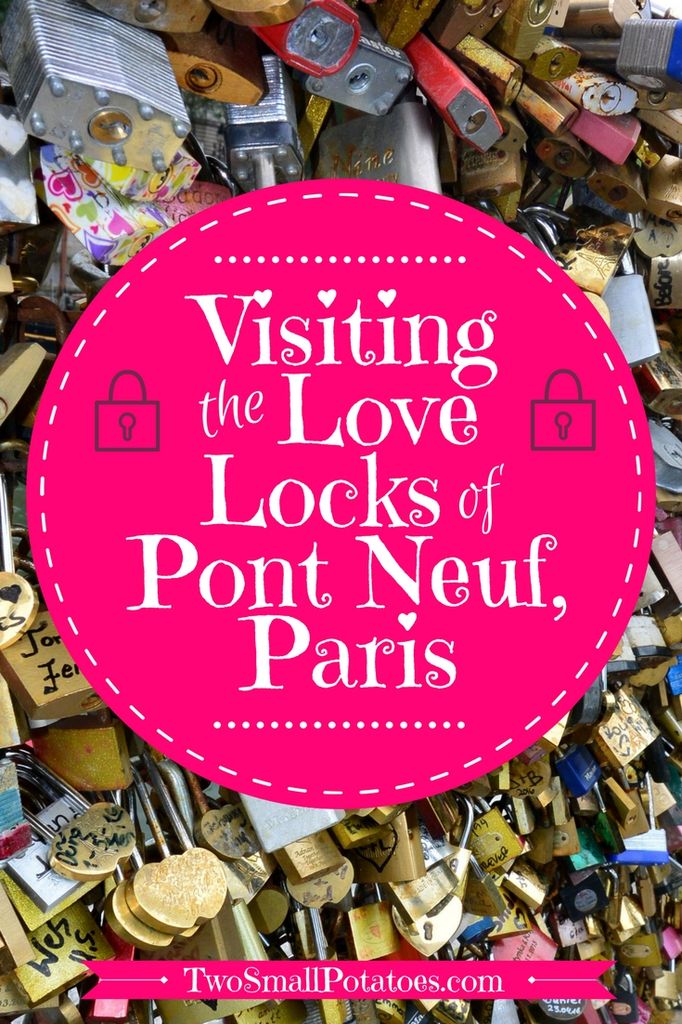 Paris may officially be known as the “City of Light,” but it’s at least as often referred to as the City of Love.  Until you see it in person, it’s impossible to fully understand just how charming it is.  The city is famous for attractions like the Louvre, the Eiffel Tower, and Notre Dame.  But a more recent tradition that draws lovers from all over the world began sweeping the city around 2008 – that of attaching locks with love messages to bridges over the Seine River. The tradition began with the Pont des Artes, but has since spread to Pont Neuf and neighboring bridges in Paris.

We didn’t intend to seek out any of these bridges or attach our own love lock while we were in Paris.  We were just in the city to meet up with two American friends vacationing in Europe.  As it so often turns out, though, we stumbled upon one of these bridges anyway.  After a fascinating afternoon exploring the Louvre, the four of us were famished.  We set out along the Seine with no particular destination other than to find food, not exactly a difficult thing in Paris.  The biggest problem is deciding where to eat.

Spotting a tree-lined street across the river that looked promising, we headed for the nearest bridge.  Quite by accident, we’d found Pont Neuf, one of the city’s most historic bridges.  When construction was completed in 1607, the bridge became the first to cross the Seine in a single span.  It’s now the oldest bridge in Paris.

And locks of love?  It has those aplenty!

When we reached the middle of the stone bridge with its metal lock-encrusted railings, we were met by a couple of friendly hawkers selling cheap padlocks for about €5.

While I trailed ahead to look at the astounding variety of padlocks, Travis hung back with our friends while they bought a lock.  Still practically newlyweds, our friends wanted to take part in this romantic tradition of leaving a lock.  Returning to them a few minutes later, I was surprised to see that Travis had bought a lock for us as well.

Or so I thought…

I should have been suspicious immediately.

Though Travis is an incredibly sweet and thoughtful husband, small gestures of romanticism are not really his M.O.  Usually I don’t mind since I don’t really care much for things like store-bought flowers or expensive bling.

A single trip like that excuses him for a solid decade of minor lapses!

Sure enough, it turned out that Travis really bought the love lock to bail out his good buddy, Khoa.

Right after buying his own love lock, Khoa absentmindedly snapped it closed to “test it” before realizing it didn’t come with a key.  This left him in a bit of a sticky wicket with his lady love, who alternated between laughter and shaking her head in disbelief.

Never one to leave a friend hangin’, Trav forked out five bucks for a second lock.  He then wrote our names on it before he and Khoa intertwined our two locks, using ours to clip theirs to the railing.

Not only did we all get a good laugh, but now our lives will be forever intertwined in Paris.

Of course when I say “forever,” it’s unlikely.

Our locks will probably meet the same fate as those of the neighboring Pont des Artes, the first Parisian bridge to accumulate locks of love.  The tradition became so popular so quickly, that it simply isn’t sustainable.

In 2015, local authorities were forced to de-lock the entire bridge, removing 45 tons of metal for safety reasons and to protect the structure, which was severely stressed from the weight.

Though I won’t be heartbroken if our lock is taken into official custody, it would be sad for it to merely be melted back into a nameless hunk of metal.

Officials are still considering what to do with the locks from Pont des Arts, which were left intact when workers removed entire sections of railing.

Considering how popular the tradition is with tourists, I hope they simply relocate the encumbered panels to a new location – a garden or park – and allow them to grow as an art exhibit.  Locks from other bridges will inevitably require removal and could easily be added, creating a new tourist destination.

Plus it would discourage folks from adding locks to other monuments.

Bam.  I just came up with a great idea.

Distracted by Pont Neuf, we still hadn’t had lunch, so we walked along the waterfront to the street we’d seen from across the river.

The main street lining the Seine near Pont Neuf and each of its side streets are liberally filled with cafés and boulangeries, patisseries and brasseries.  Finally settling on the Brasserie du Quai, we relaxed at a table on the sidewalk with a nice view of the river.

Unable to resist the call of crêpes, I watched as our waiter drizzled them with Grand Marnier before setting the entire plate on fire.  And since I hadn’t exceeded my sugar intake for the day by threefold yet, I sampled an Irish Coffee, the best cocktail during our entire time in Paris.

We ended up lounging at the Brasserie du Quai over lunch and then drinks for several hours, content to simply sit and soak in the romantic sights of the streets of Paris.  As daylight finally started to fade, we began our short trek back downriver, stopping occasionally to see paintings lined up along the sidewalk from local artists.

In less than an hour, we would board Le Calife for a luxury dinner cruise along the ever romantic Seine, passing beneath Notre Dame and the sparkling Eiffel Tower.

Our love lock on Pont Neuf might not survive, but Paris truly is the City of Love!

UPDATE 09/2018: Officials in Paris have removed the locks of love from Pont Neuf and nearby bridges. Visitors are no longer allowed to put locks on any bridge in Paris. Writing on the new glass panels is straight-up vandalism. Don't do it! Click to Tweet
Sharing is caring.  Take a minute to PIN It!