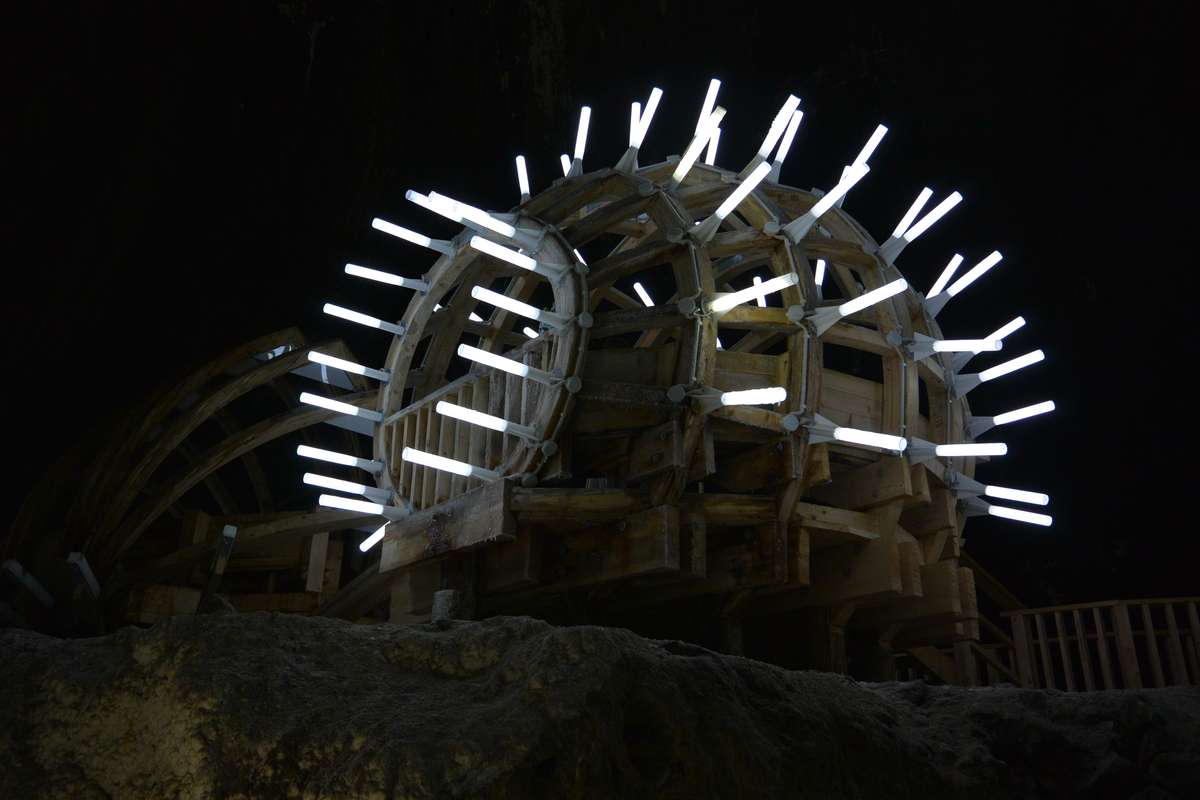 Descending into the Turda Salt Mine 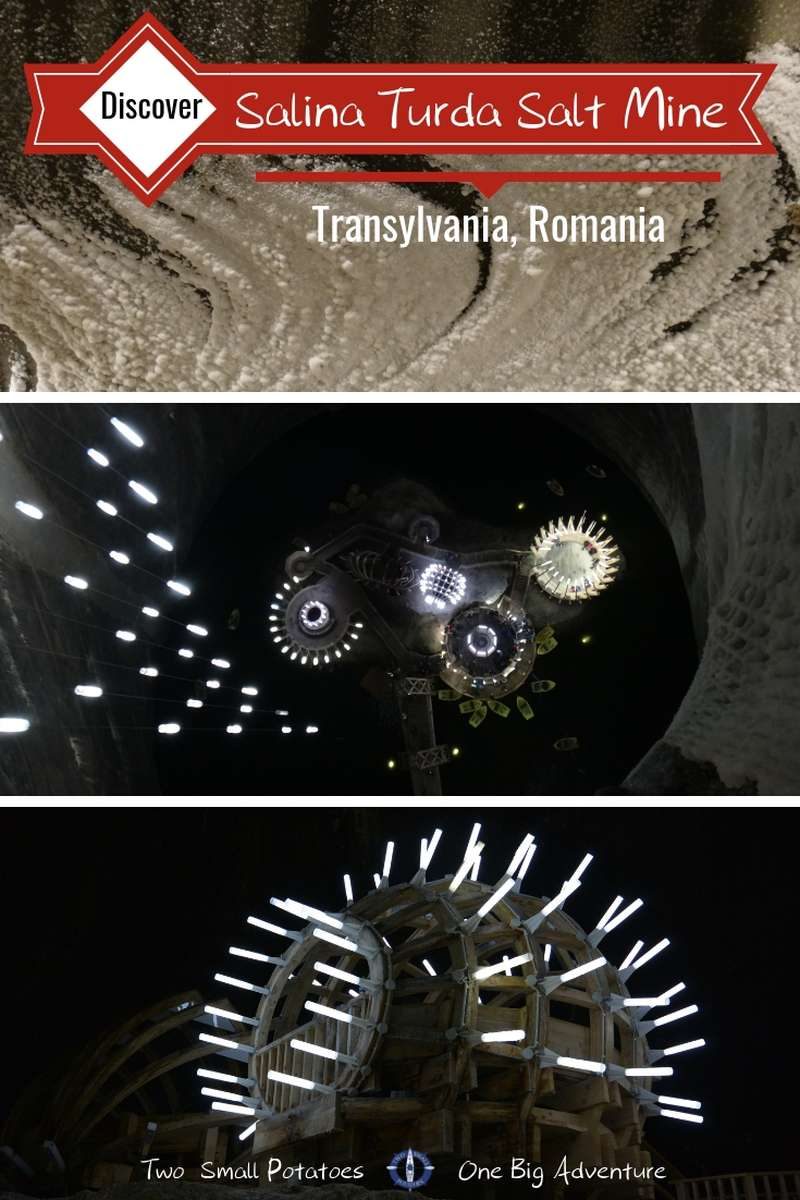 If you didn’t know where to find the entrance to the Salina Turda Salt Mine, you’d likely drive right past it.  Capped above ground by a modern glass and steel dome next to a huge parking area, surrounded by small hills dotted with marshy salt ponds, not much about the place indicates that this building might be anything more than an ordinary building.  You certainly wouldn’t know from a glance that it sits directly above a salt mine so old it was excavated by the Romans.  Deep beneath the ground, inter-connected caverns and tunnels, elevated walkways and creaky wooden stairs sprawl in every direction.  No longer an operational mine, the Salina Turda is now open to tourists, offering visitors the chance to descend 367 feet down into the depths of one of the largest salt mines in the world.

For us, this was our first trip inside a salt mine, so we were pretty excited!  Just inside the entrance, we ran across a nice visual aid of the entire salt mine complex.

Though it’s called Turda Salt Mine (or Salina Turda), the name “Turda” comes from the region in Romania where the site is located. Underground, a handful of individual conical chambers carry their own names: the Iosif, Rudolf, Terezia, Anton, and Gizela Mines.

The route into the mine is fairly obvious with only one main tunnel, the Franz Joseph Gallery, connecting all of these chambers.  Stretching for almost an entire kilometer, the Franz Joseph Gallery was excavated to allow workers to transport the salt underground from each mine chamber to one main exit point.  The salt was then immediately transported to warehouses nearby. Excavation of the tunnel began in 1853 and continued for over four decades, when it was finally completed towards the end of the 19th century.

Every surface inside Salina Turda is coated with salt.  It’s caked on the walls in vertical clumps, suspended from the ceilings as fine, pencil-thin stalactites, and swirled over surfaces like ice sheets in the Arctic. 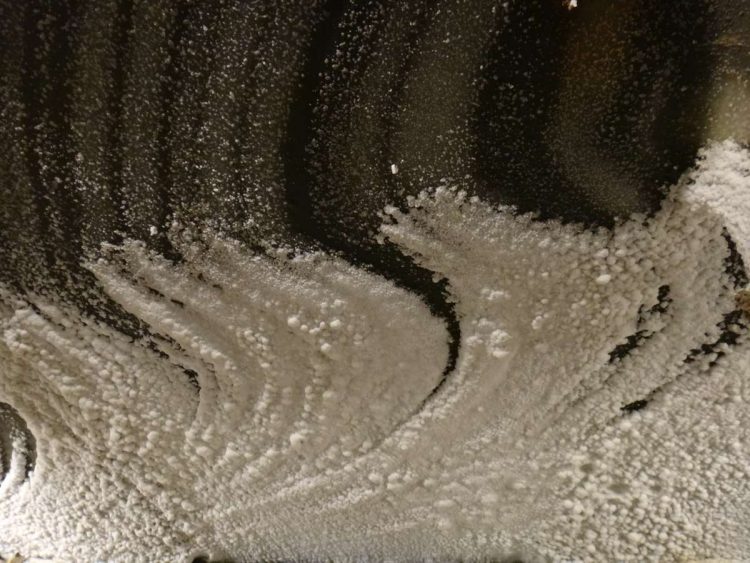 Before entering any of the individual mine chambers, you’ll likely first pass through the “roll-call room,” a room formed unintentionally as a space between the caverns during excavation.

Since this was the entry and exit point for workers entering the chambers from the Franz Joseph Gallery, it became the natural place for mine bosses to call roll for workers on their way to the chambers below.  Then they’d mark them off when they safely returned after shift.

From the roll-call room, climb the few stairs where you can look across at the narrowest, upper portion of the bell-shaped Terezia Mine.  Coated in salt, sheets of protective netting hang from the ceilings and around the walkways as protection from falling rocks or objects inadvertently dropped from above.

Peering over the railing into the depths of the Terezia Mine, the deepest of all the chambers at 112 meters (367 feet), it’s difficult to tell at first what it is you’re even seeing.  Once your eyes adjust to the dim light, you’ll realize that several hundred feet below is an underground salt lake.  Little yellow boats are tied around a cluster of otherworldly spheres of light.

The mine’s many levels are accessible by elevator or stairs.  Passing up the elevator, we opted to take the salt-encrusted wooden stairs to the next chamber.  Descending countless flights of incredibly narrow, nearly vertical steps, we arrived at the Rudolph Mine – my personal favorite.

Your vantage on the suspended wooden walkways of Rudolph Mine opens onto a truly surreal world.  Directly across is the elevator to the Franz Joseph Gallery.  Immediately next to that is a flight of stairs leading down from the Rudolph Mine.  The gaping hole in the center marks the entrance to Terezia Mine from the chamber of Rudolph, though you’ll have to descend to enter. Below on the left is a giant Ferris wheel.  Illuminating it all, pendant lights float from the ceiling like old-fashioned lanterns.

Once you reach the lowest point of Salina Turda, it feels almost like being in a jar.  Long since sealed, the two dark openings above mark the top of the bell-shaped Terezia Mine, where visitors first look out over the railing on arrival.

One final set of stairs leads through a fissure in the salt walls separating the Rudolph and Terezia Mines.  Once used as the dumping grounds for salt “waste,” a small island in the center of the lake grew over time.

I couldn’t help but wonder what workers 1,000 years ago would think if they could see Turda Salt Mine now.  Or the miners who descended into the darkest depths of Terezia in the 19th century, lowered by ropes into the darkness after a fervent prayer for their safe return.   Closed in 1932 after a long decline, the mine was briefly used as a bomb shelter during World War II.  Later, the long, cool, damp Franz Josef Gallery was used to store telemea, a special Romanian cheese made of sheep’s milk.

What would those folks think about Salina Turda now, with its Ferris wheel and paddle boats, its elevator and electric lighting and museum paying homage to a way of life that’s moved on into history?