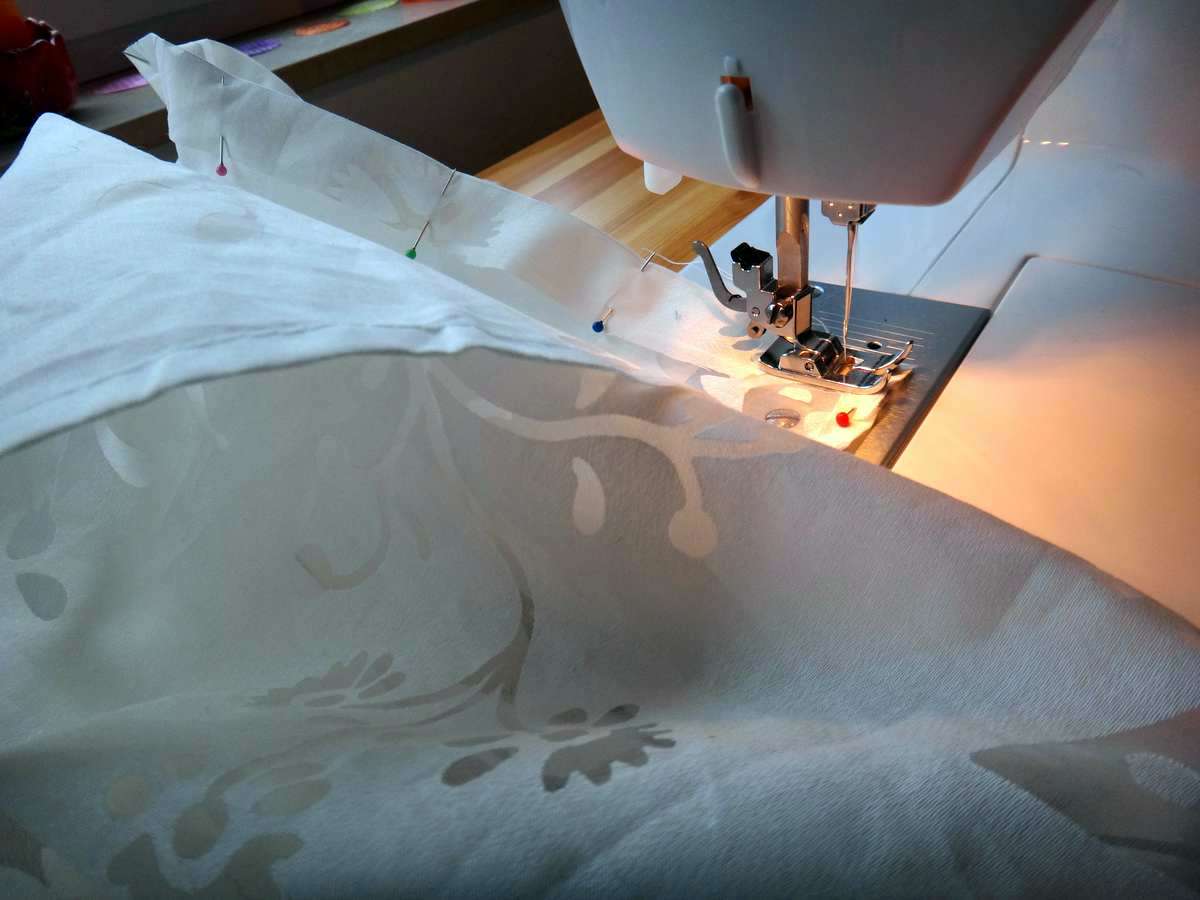 Expat Life in Germany
February 18, 2016 0
*This site contains affiliate links. If you purchase through these links, we may receive a small commission at no extra cost to you.

Eureka!  We’ve done it!  We’ve cracked the top-secret code of German curtain terminology.  I am not a kiddin’ when I tell you that figuring out how to buy curtains and make them fit our plain old standard windows has been one of the hardest tasks as expats in Germany.  Not only have we accomplished the task, but we were able to do so without spending very much money – less than 50 bucks (excluding our plissee project).

When we started curtain shopping in Germany, we had two main goals. First, we wanted to figure out how to make use of the curtains we brought from Switzerland that didn’t have any hardware.  Second, we needed to buy new living room curtains, ideally ones that would fit a special ceiling curtain rail the previous tenants left at our new flat.

Searching for inexpensive curtains we liked, I finally lucked out in the clearance section on a website called Bonprix.

For €8.99 apiece, we bought 4 curtains for our biggest windows and sliding glass door in the living room.  With a not-too-girly green fern motif, they’re the perfect fit for our living room.  As is often the case with clearance items though when you have to take what you can get, the only remaining size was 140 cm high x 245 cm long.  Not only is 140 cm not very wide, but 245 cm is ridiculously long.  Apparently a standard size in Switzerland and Germany, it seems common for folks to hem them after purchase or pay to have it done.

Once the curtains arrived, they sat on my desk for over a week while I pondered what to do about hemming them.  Trav drilled holes and hung the ceiling curtain rails for them, and still, they sat.

Not a total slouch with a sewing machine, I was bummed I couldn’t use the one I’d brought from the US.  Though Trav looked into whether it would work in Europe before we moved, he found out afterwards that European current is incompatible with the machine, and the necessary converter costs more than a used BMW.

The entire time we lived in Switzerland, I owned a Swiss-made Bernina sewing machine that we'd paid to ship from the US, despite that it weighs almost as much as a BMW. Then we lugged it to Germany, where it still sits in a corner, unusable. Click to Tweet

Luckily, a friend came to the rescue, loaning me her snazzy Singer machine.  Grateful for its universal sewing knobs and stitching symbols rather than German-language instructions, I had it up and running in no time.  For the better part of an evening, I hemmed our four new fern curtains with a little help from Brisco, my personal assistant on this particular project.

Our last step was just to hang our new curtains.

We had figured out much of the unfamiliar German curtain terminology.  We knew that schlaufen and vorhangen ösen, traditional curtains with loops made for a curtain rod, wouldn’t work for the ceiling rail the previous tenants left at our flat.  We’d correctly purchased vorhangen kräuselband, special curtains that are made to go with the curtain rail.  And we had the final component – innenlaufröllchen.  These little plastic hardware with hooks on one end attach to the curtains on one side and rollers on the other to slide in the curtain rail.

Only thing is, the hardware, which we’d bought at IKEA, didn’t fit inside the curtain rail when we tried to hang our hemmed curtains.

Let’s give it an “Amen!” just for good measure.

At a specialty curtain shop in Göttingen, we bought more innenlaufröllchen that looked almost exactly like the ones from IKEA, but they fit perfectly in our curtain rail.  Go figure.

Next I tackled the four older curtains we’d bought in Switzerland.  Since I hadn’t had a sewing machine there, we’d creatively jury-rigged them with knots to keep them from dragging on the floor.  It wasn’t pretty, but it worked. 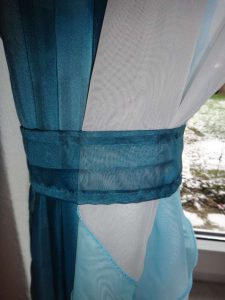 After hemming, they correctly fit our windows for the first time. Putting the teal set in our bedroom, I made matching window sashes with the material left over from hemming them. Finishing the whole shebang with a €6 basic curtain rod, our bedroom curtains were up.

We hung the last two curtains in the second bedroom, but not over the windows.  Using them to divide the room into a guest bedroom and an art studio for me, Trav hung a narrow curtain rail in the middle of the room.

Fully expecting our new roller hardware from the curtain shop to work in this curtain rail (since we bought it at the very same shop), it was just too much to ask.  Giving the IKEA rollers a try, they were perfect.

Standardizing innenlaufröllchen – or even better, all curtains in Germany – would likely go a long ways to preserving the sanity of all future expats.

I’ll keep my fingers crossed for them.

As of now, we’re done buying curtains, plissees, or any other kind of window adornment.

We opted not to hang or install anything in the third bedroom since we’ll be advertising for a roommate soon, and they might either have curtains already or prefer to choose their own.  If not, we’ll be happy to help them put something up now that we know the difference between rollos and schlaufen, innenlaufröllchen and vorhangen.

Of course, they might be German, in which case we should’ve had them move in weeks ago so they could help us figure out the mysterious world of German Curtain Terminology!

For those who are possibly trying to figure out their own window- covering dilemma, this little list of German curtain terminology might help.  Good luck!