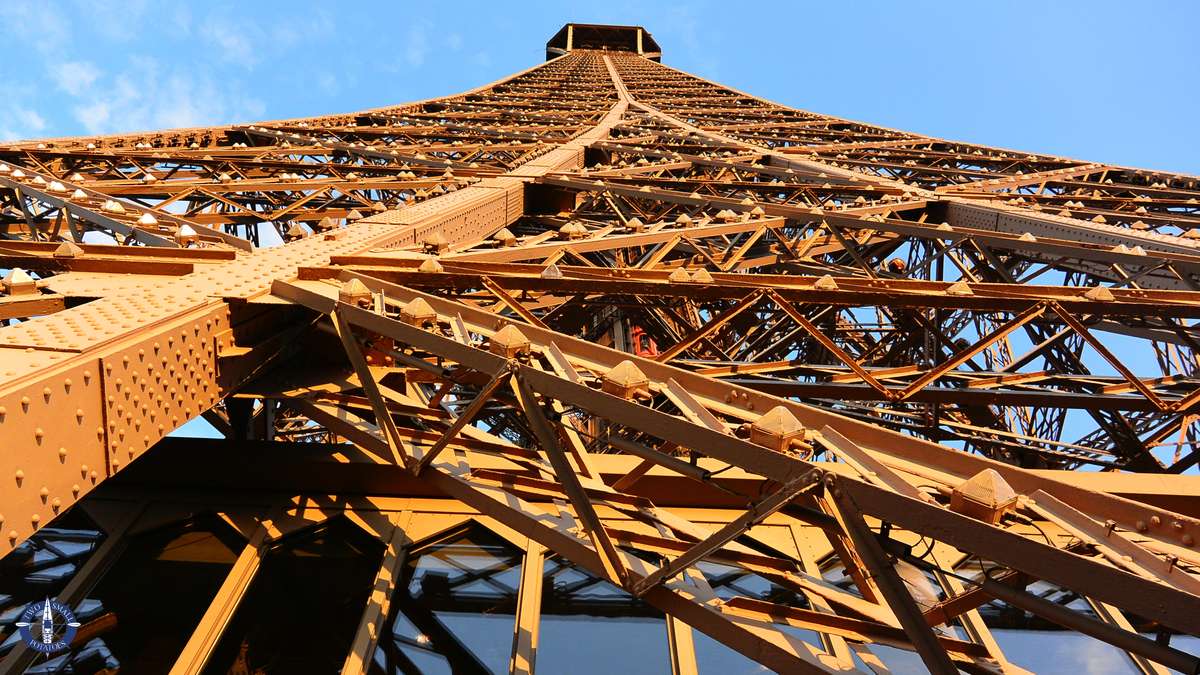 France
May 15, 2016 0
*This site contains affiliate links. If you purchase through these links, we may receive a small commission at no extra cost to you. 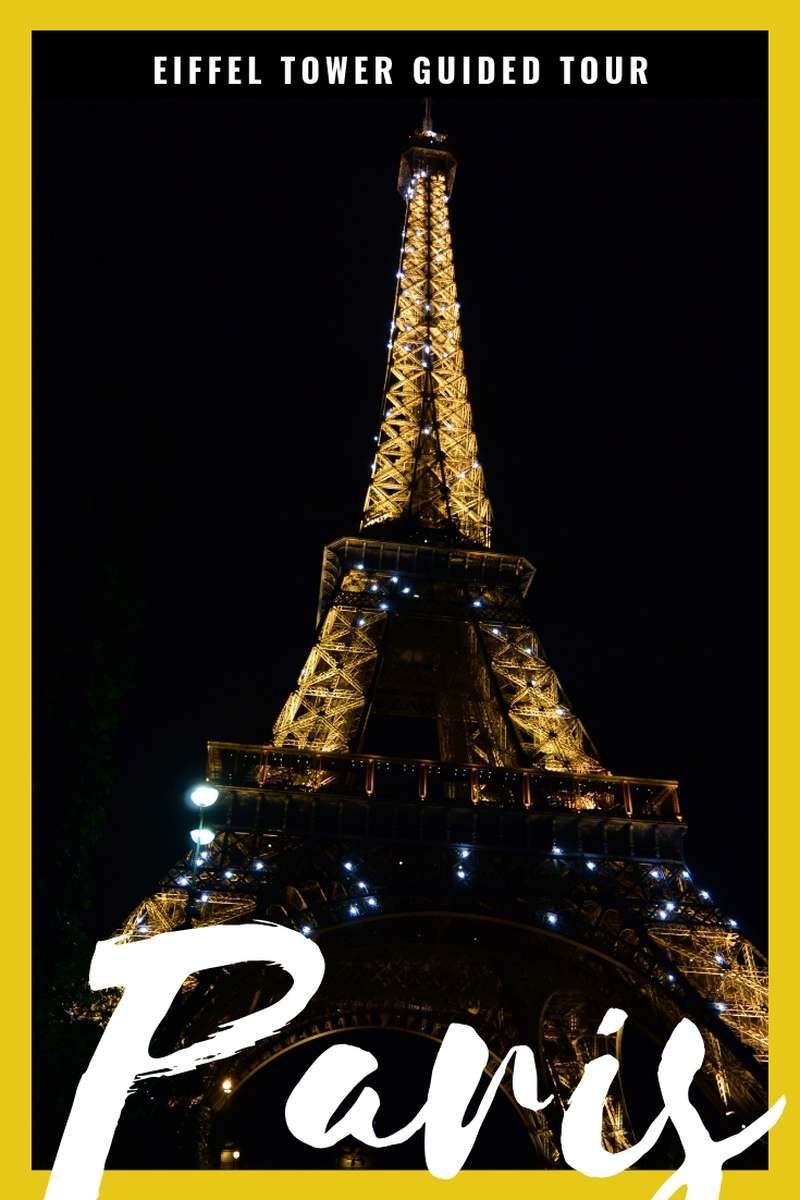 Travis and I spent our last evening in Paris with friends from the US and one very special lady – La dame de fer, “The Lady of Iron.” As the most visited paid monument in the world, the Eiffel Tower drew us to her as she does millions of visitors each year. A trip to Paris just isn’t complete without a visit to its most iconic landmark. If you want to skip the lines, get to see parts of it that the general public doesn’t, and take in a killer sunset from the top, we highly recommend doing a guided tour. Even if you typically shy away from “touristy” attractions, it’d be a shame not to give the pretty lady a chance!

Most folks are at least somewhat familiar with the Eiffel Tower’s history. Built for the 1889 World Fair, the event was held to commemorate the 100th anniversary of the French Revolution. After its completion, the rights to the tower were given to Gustave Eiffel – the primary civil engineer and architect who worked on the project. Use of the tower was granted to him for just 20 years, allowing him to charge admission for entry and to recoup a portion of the money he’d  poured into the project.

Had it not been for our lack of planning, this would likely still be the extent of our knowledge of the tower. Since we’d neglected to buy tickets online with sufficient advance notice, regular tickets were sold out for the entire month – with the exception of a single midnight slot – by the time I looked online a couple of weeks before our trip.

All four of us wanted to see the tower and the city by night but also wanted to be at the top to watch the sun set, so we decided to book a guided tour instead. After searching the Paris Visitor’s Bureau website, I found a promising guided tour, paid online, and a few minutes later the tickets were in my email inbox.

Find out why you should consider doing a guided tour of the Eiffel Tower in Paris, plus useful tips if you decide to visit on your own. Click to Tweet

Arriving early, our group waited near the bust of Gustave Eiffel near the north column for our 7 pm tour to start. Since our guide was a bit late, we had plenty of time to walk around and admire the fascinating infrastructure of the tower from underneath. Much of the Eiffel Tower is made up of plain iron girders, with the exception of the main lower level archways that are embellished with decorative filigree.

When our tour guide showed up, he led us away from the tower to a locked above-ground cage. Leading us down into the depths, we spent the next 20 minutes or so in a bunker beneath the Champs de Mars – the long, rectangular grassy field stretched out beneath the tower.

The Eiffel Tower as a Radio Antenna

While we looked at old photos on the walls, our guide explained why the tower hadn’t been dismantled in 1909 as was planned.

Saved by Gustave Eiffel’s foresight and dedication to scientific research, world events, and the building’s excessive height – the tallest building in the world at the time – the tower was put into use as a radio antenna. Massive cables were installed, which were housed in the bunker beneath the Champs de Mars where we were standing. We poked our heads into the now-empty tunnels for the cables to hear our voices echo.

In 1898, the world’s first radio transmission was sent from the Eiffel Tower to the Panthéon 4 km away. By 1909, the tower was in use to send telegraphs and would become a critical asset to the French military in intercepting German transmissions during WWI.

And to think that some folks were viciously opposed to the tower. Before it was even built, several hundred artists banded together to write a letter condemning the project.

We, writers, painters, sculptors, architects and passionate devotees of the hitherto untouched beauty of Paris, protest with all our strength, with all our indignation in the name of slighted French taste, against the erection …of this useless and monstrous Eiffel Tower … To bring our arguments home, imagine for a moment a giddy, ridiculous tower dominating Paris like a gigantic black smokestack, crushing under its barbaric bulk Notre Dame, the Tour Saint-Jacques, the Louvre, the Dome of les Invalides, the Arc de Triomphe, all of our humiliated monuments will disappear in this ghastly dream. And for twenty years… we shall see stretching like a blot of ink the hateful shadow of the hateful column of bolted sheet metal.


Such contempt, just believing it would blight their skyline for the next 20 years. Imagine how opposed they would have been had they known it would become a permanent landmark.  If only they could see it now!

Wrapping up our visit under the Champ de Mars, we headed to the main entrance to the Eiffel Tower, falling into line to pass through a tight security checkpoint with metal detectors. Having seen a box at the entrance where metal objects were being confiscated – scissors, locks, pocket knives – Travis ducked away for a few minutes to stash his pocket knife in a hidden place in the bushes.

A man from Idaho has no pocket knife like a girl from Winterfell has no name.

Also, pocket knives and combo locks I can understand, but who carries things like a full-sized metal butter knife on their person?

Once inside, our tour group detoured away from the main tourist line and branched off through a separate, locked gate. Winding up and over a grated metal staircase and over catwalks above the folks below, our guide led us into the confined space under the Eiffel Tower.

It’s in this confined space that visitors can see the inner workings of the Eiffel Tower – the dynamics of its elevator system.

Of the five hydraulic elevators that were originally installed in 1889, two are still in use.  Cables connected to the elevators run through a system of pulleys, thus shortening the distance the cables have to travel to operate the elevators.

Water powers the lifts.  Thousands of gallons of water are flooded into giant yellow and red drums, or accumulateurs, forming the basis of the hydraulic system for the elevators. As the drums are filled, they lower, essentially pulling the elevator cars up via the cable and pulley system. When the drums are emptied, they rise, lowering folks back down the elevator.  It’s rather a fascinating set-up, and to think that someone engineered it in 1889 is impressive.

During WWII, the French sabotaged the monument’s elevator to protect the tower from Hitler and his troops. They wanted to prevent its use for nefarious purposes. The vandalism was effective. Hitler couldn’t access the top unless he used the stairs, which he apparently never did. When France was liberated in 1944, the elevators were repaired and Allied troops were given access to the tower free of charge in order to re-establish communications.

Exiting the hydraulics room, we took an elevator to the second floor where we were met with a wall of visitors. Just making it to the edge of the railing requires skillfully maneuvering.

With one more destination on the guided tour, we were given another 15 or 20 minutes to explore the second floor while waiting for the tour group ahead of us to finish. It was the perfect opportunity to grab a few photos of the city and enjoy the views.

Our last destination on the guided tour was to the rooftop of Le Jules Restaurant on the second floor.

This vantage offers virtually the same views as you get just a few meters below at the overlook from the second floor. It’s interesting, though, to see small wind turbines here on the roof that are used to manufacture all the power needed for the restaurant. It’s also much less crowded than the rest of the second floor.

For us, the timing couldn’t have been more perfect. The sun set over the Eiffel Tower while we were on the rooftop of the restaurant, bathing the tower and the city of Paris in a stunning orange glow.

Third Floor/Top of the Eiffel Tower

By the time we reached the top of the tower, it was dark.  Paris, the “City of Light,” spread before us in blue and black velvet – bridges, towers, churches, and monuments sparkling below.

The city is absolutely breathtaking at night.

Care for some bubbly?

Bar à Champagne is located at the very top of the Eiffel Tower. As its name states, you can buy champagne. Just be prepared – it’s €14 a glass!

If you do want a glass, make sure you’re done taking photos and are ready to just sip bubbly and enjoy the views. The plastic champagne flutes don’t have bases so you can’t put them down. Whether you’re snapping photos with a smart phone or a DSLR, you’ll be pretty much out of commission with a drink in your hand.

After walking around the very top of the Eiffel Tower, we caught the elevator back to the second floor.

With just minutes before the hourly light show began, we flew down the last few flights of stairs and rushed for a good vantage far enough away to see the entire tower. We arrived at the monument’s base just as the show began, illuminating the night with thousands of sparkles.

The yellow gleam of the tower is from the regular lights, while the white sparkles are part of the hourly light show.

My favorite moment in the video below is the lady laughing at the end.  Her laugh makes me laugh!

For a time, Gustave had an apartment at the top of the Eiffel Tower.

Not a bad place to live, oui?

Though it wouldn’t be very convenient to run to the nearest boulangerie for your daily bread, it would be wildly unique.

And to think that this beautiful, iconic building was nearly destroyed. Can you even imagine Paris without the “useless and monstrous…barbaric bulk” of the Eiffel Tower, the city’s Dame de fer?

I ought to be jealous of the tower. She is more famous than I am.
~ Gustave Eiffel

Know Before You Go
650 shares