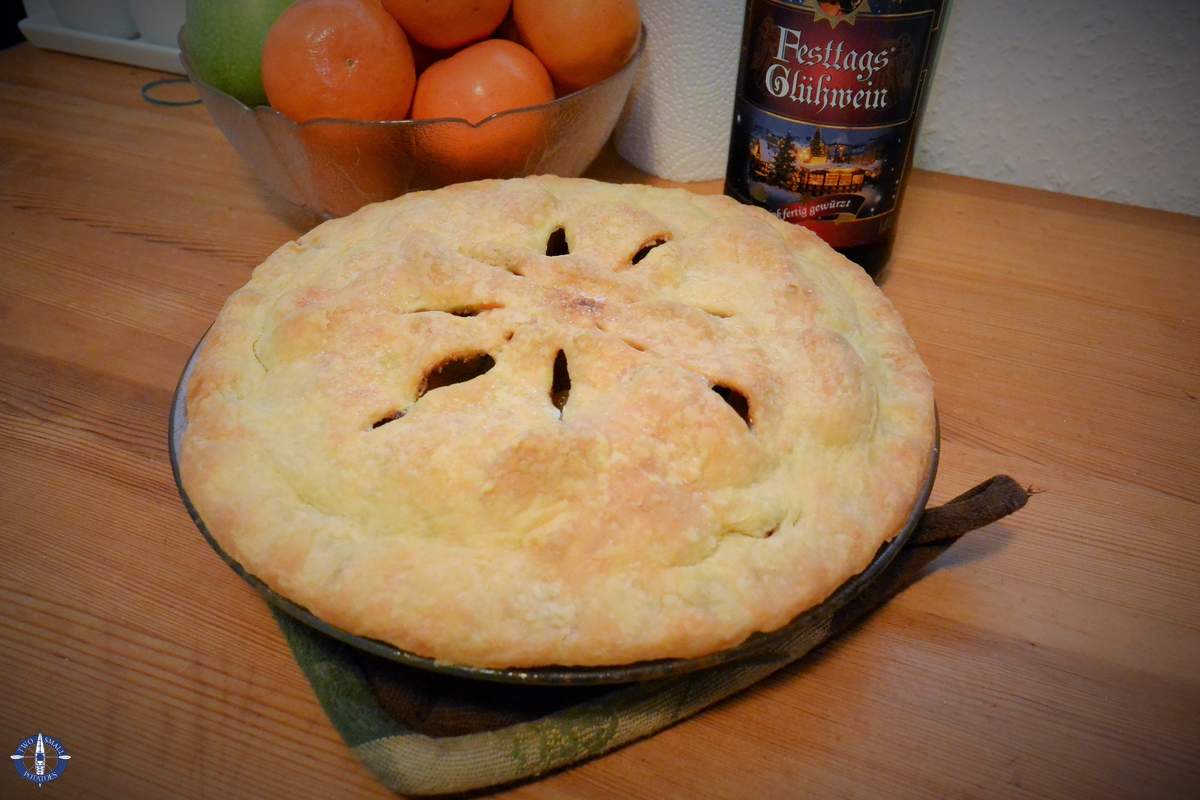 A dilemma of monumental proportions hit us a few days before Christmas.  What the heck were we going to do for the holidays? Unless you count not planning as a plan, we didn’t have a plan. We didn’t even intend to cook a real dinner until Christmas Eve when we came across a cold case of comically tiny turkeys at the local grocery store. We’d had to special order a farm-direct turkey in advance when we celebrated Christmas in Switzerland, so we just assumed they’d be absent in Germany as well. Suddenly excited about the holiday weekend, we snagged a wee 5-pounder and all the fixin’s for a traditional American Christmas dinner, our first in Germany.

Thank you, Germany, for the unexpected gift of a Christmas turkey!

Lots of Europeans have asked us what’s traditional for Americans to eat at Christmas, often because they want to know if what they see in Hollywood movies is true. As it turns out, it’s actually not so easy to answer considering how much diversity exists in the US. Christmas dinner from any given household in Oregon, Louisiana, Arizona, and Maine could easily not share a single common dish. Despite that, there are certain foods you’re likely to find on some dinner tables across America on December 25th.

For the main course, coastal areas are more likely to celebrate with lobster, shrimp, or seafood. Rural areas often serve elk or venison, including in our families when we were growing up in Idaho. True to Hollywood movies, the star of Christmas dinner is usually turkey, ham, or roast beef. Sides include everything from mashed potatoes, gravy, and bread or rice stuffing to candied yams, biscuits or dinner rolls, vegetable dishes too numerous to count, and a variety of homemade casseroles.

With a few minor differences, Travis and I grew up in households with similar menus on Christmas. As adults, we’ve adapted dishes to suit our particular tastes, but we always make the same core dishes as our moms did. Even now, Christmas dinner is centered around a huge ham or turkey. We almost always have garlic mashed potatoes, gravy made from the juice of the cooked turkey, brown rice stuffing, green beans with pepper bacon, either homemade biscuits or dinner rolls, and California black olives.

This year we were able to recreate our traditional American Christmas dinner nearly to a T, and man it was good! We even finally found some black olives we like as much as our American ones. Plus, I’m so addicted to a specific brand of Spanish green olives stuffed with bacon that they made it onto the Christmas menu. The only thing missing was my mom’s homemade biscuits!

Of course, the pièce de résistance for me is always dessert. I have such a sweet tooth! While cheesecake isn’t a common holiday dessert in our families, one occasionally appears.  Instead, pecan, pumpkin, and fruit pies are much more common. I usually make a fruit pie – apple, strawberry/rhubarb (Trav’s favorite), or huckleberry when we have the berries. When my grandpa was still alive, I would make him a gooseberry pie. I knew it was a winner if it was tart enough for him to refer to it as a “one eye opener.”

While the US certainly has adopted some food traditions from German immigrants, Christmas dinner in Germany varies quite a bit from the US. Historically, Germans would attend midnight mass on December 24th, so the evening meal was intended to be light, consisting of fish and potatoes, fondue, or sausages and German potato salad (quite different from American potato salad). On Christmas Day, it’s traditional for Germans to serve goose, fish, or duck as the main course, alongside potato dumplings, apple stuffing, and red cabbage, kale, or Brussels sprouts.

It also wouldn’t be a proper Christmas dinner in Germany without Stollen. Especially famous in Dresden, the cake-like bread is filled with nuts, spices, and dried fruit – often soaked in rum. After baking, the loaf is slathered in unsalted butter and rolled in powdered sugar. While we’ve seen it in stores and at several Christmas markets, we haven’t yet mustered up the courage to buy some. We’ve never come across a palatable fruitcake, so we’re both a bit skeptical.  Perhaps next year will be our year for Stollen. We absolutely love our traditional American Christmas dinner, but hopefully we’ll have a chance to experience a genuine German Christmas dinner before we leave Europe.