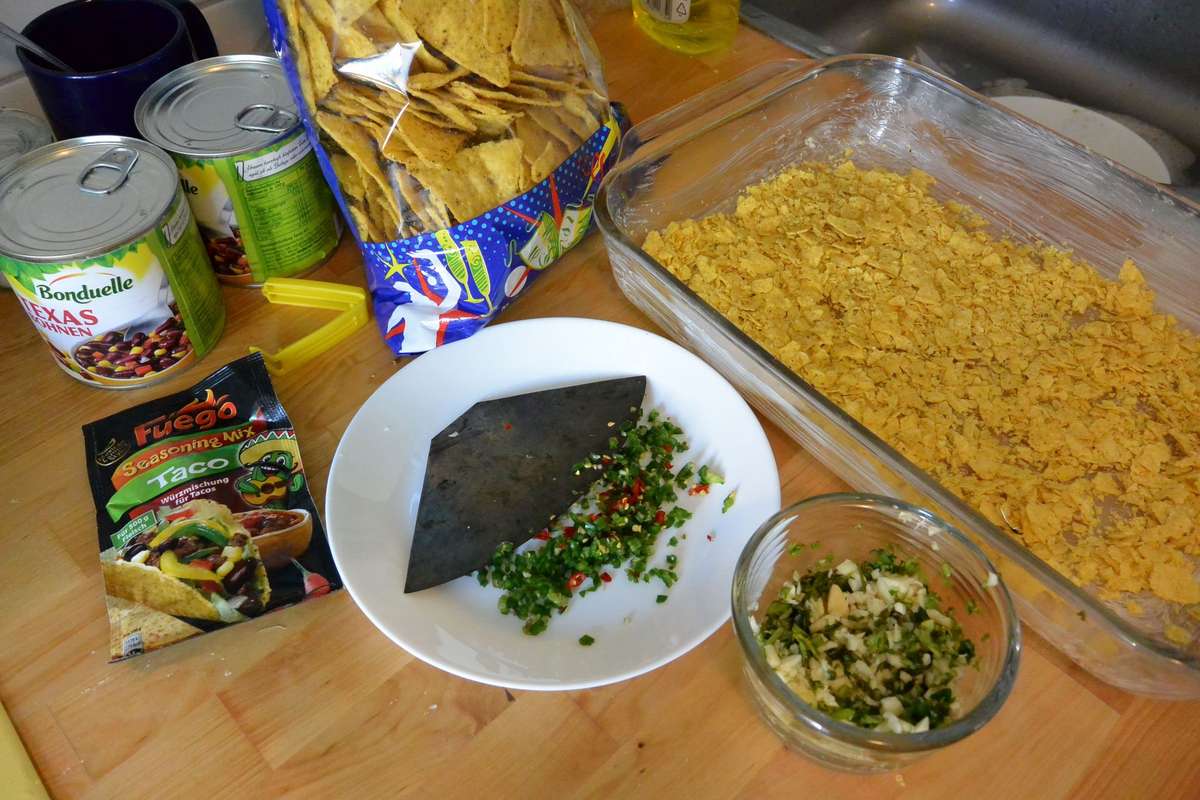 Almost every year, Travis and I celebrate Cinco de Mayo on May 5th. Neither of us is of Mexican descent, but like so many holidays we have in the States, it’s one that grew from our large immigrant population and one that many Americans celebrate.  In Mexico, the date commemorates a major military victory against French forces at the Battle of Puebla in 1862. In the US, the holiday is a celebration of Mexican-American culture.  For us, it’s a day when we celebrate all things Mexican.  Typically we host a big potluck at our house or attend a friend’s party.  We make homemade sangría, serve margaritas, wear the closest thing we can find to traditional Mexican clothing, and stuff ourselves with pico de gallo, chicken tomatillo salsa, and so much good food it makes my stomach growl just thinking about it.

Cinco de Mayo is also celebrated in a few big cities in Canada, Australia, and Japan, but not so much in Germany. Instead, the 5th of May this year is a national religious holiday to celebrate the day that Jesus is believed to have risen to Heaven – Ascension Day.  That, and it’s also Father’s Day.  While Ascension Day is primarily celebrated in Bavaria by those who are more religious, Father’s Day is celebrated throughout the entire country, primarily with copious amounts of beer and “manly” activities like riding bikes and hiking.  Since neither of us is German – or a father – we instead spent the day at a BBQ potluck in the park with a fun group of expats from Australia, England, Poland, Mexico, and the US – plus one German!

Not realizing that we might be the only ones who thought of the potluck as a celebration of Mexico, we spent the entire morning in the kitchen making “traditional” Mexican things.  I baked a huge batch of biscochitos, a cookie similar to a sugar cookie but flavored with anise seeds and cognac before rolling them in cinnamon and sugar.

As with the holiday itself for Americans, the cookies are an amalgamation of traditions and recipes brought by immigrants both from Spain and Mexico to the American Southwest.  The recipe I use was given to me by a friend while we lived in New Mexico, which, incidentally, is the only US state to have an official state cookie – the biscochito.  Also spelled bizcocho or bizcochito, it’s similar to the traditional Mexico wedding cookie.  I absolutely love them and inevitably eat way too many of them!

No sooner was I done making cookies than Travis started putting together a Mexican chicken casserole with cilantro, jalapeños, beans, corn, garlic, onions, bell peppers, crushed tortilla chips, and a tasty layer of Bandon cheddar cheese from Oregon that Trav’s mom mailed us.

He ended up with so much food, he had to split it into two huge frying pans.  Since we knew there would be quite a few kids at the potluck and Travis likes insanely spicy things, he added peppers to one half only.  I really don’t think I’ve ever had a single Mexican dish (or drink) that I didn’t like, authentic or otherwise.

We easily found our rather large group by their huge blue tarp spread out and a mob of kids giggling and playing.  It was nice to see several familiar faces.  We had already met folks in person a few days before when they invited us to the local movie theater to see Hamlet with Benedict Cumberbatch.  We spent the entire afternoon into the early evening chatting, swapping expat stories, eating, and enjoying the sunny summer day.   It felt wonderful to do something so normal, spending a day at the park and socializing with really nice people.  Plus, it’s such a relief to know that our first grey winter here is officially behind us.

We now have an entire beautiful summer spread out before us filled with travel plans, kayaking trips, and leisurely weekend excursions exploring Germany!