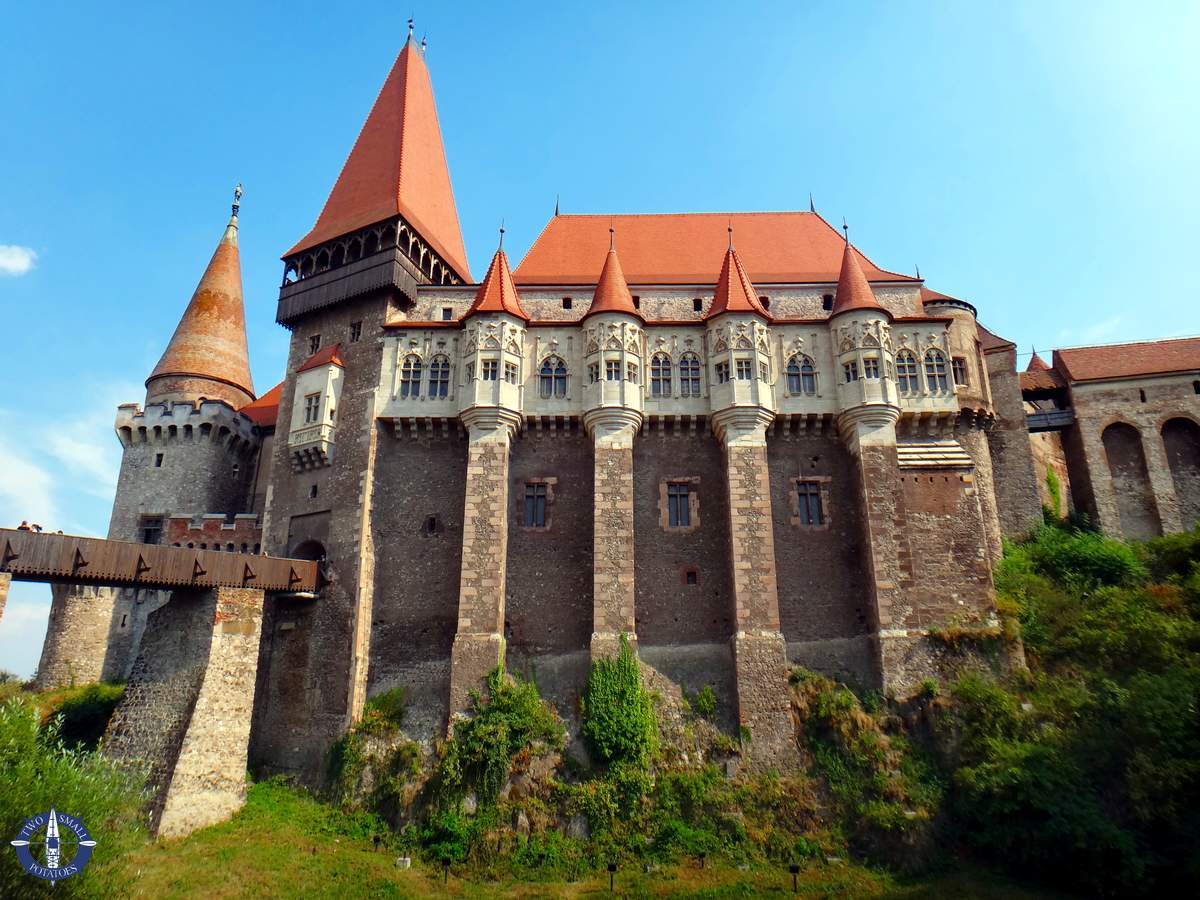 Visiting Corvin Castle, One of the Seven Wonders of Romania 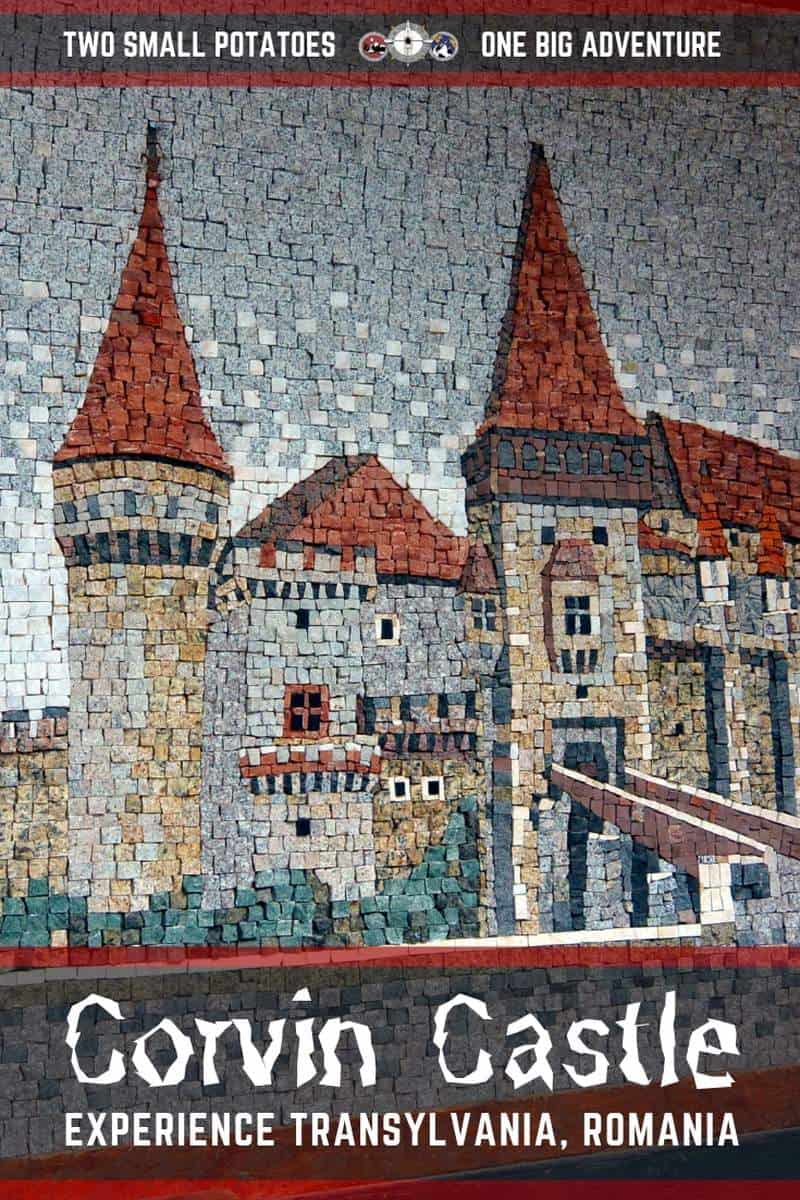 What’s the first thing you think of when you hear the word Transylvania? Vampires? Pale mist stealthily creeping through haunted forests? Howling wolves on the prowl and turreted castles, darkly brooding under perpetually ominous skies?

Whenever I envisioned Transylvania, those were the images that filled my head for most of my life. As a kid, I didn’t even know it was a real place. I thought it was a fictitious setting created by writers of science fiction. Bram Stoker’s Dracula, with all of its historical inaccuracies, just added fuel to the imaginative fire.

When our Romanian friends in Switzerland showed us a video to dispel some of the myths, it didn’t change our minds at all. Instead, we saw a country that was far more fascinating and beautiful than any movie we’d seen about it!

The real-life Dracula’s Castle, Bran Castle, might not resemble the mountaintop stronghold from American movies, but Corvin Castle very much does. We decided the medieval castle absolutely had to be the first stop on our 11-day road trip from Switzerland to Romania.

We’re so glad we did; it left us awestruck! We guarantee if you visit, it won’t disappoint. There’s a good reason this beauty is included on just about every list of the most beautiful castles in Romania, including the Seven Wonders of Romania.

Corvin Castle (Castelul Corvinilor) in Transylvania is one of the largest, most jaw-dropping castles in Europe. Find out why it's a must see. Click to Tweet

Corvin Castle is located in Hunedoara in the southwestern region of Transylvania.

The nearest large towns are Timisoara and Cluj-Napoca, both of which are about 2 1/2 hours by car. From Bucharest, the capital city of Romania, it’s closer to a 6-hour drive.

The castle is actually roughly halfway between Bucharest and Budapest, Hungary’s capital, making it an easy detour if you’re driving between the two cities.

Corvin Castle undoubtedly has more names than any castle we know. In Romanian, it’s called Castelul Corvinilor. In English, you’ll usually see it referred to as Castle Corvin, Hunedoara Castle, Hunyadi Castle (or just Hunyad Castle), or the Castle of the Raven.

It’s useful to know if you’re planning your own Romania travel; otherwise it can be confusing.

When was Corvin Castle built?

The date the foundation stone was laid at the site is disputed, but it’s believed to be either as early as the late 14th century or sometime in the early 15th century.

Initial construction on the site was limited to a fortress and a prison. Vlad Dracul, the historical figure that gave rise to the fictional Dracula character, was later imprisoned there for seven years.

Earnest work to actually build a castle began after 1440.

Who lived in Corvin Castle?

The various names for the castle can be directly linked to its history – and those who once lived in it.

Before the castle was built, the area was part of a Roman settlement. In 1409, the land was given by King Sigismund of Luxembourg, the King of Hungary, to Voyk de Hunedoara. It was a reward for loyally serving as one of his best military leaders.

The land then passed down through many generations of the Hunedoara family. (The family name is “Hunedoara” in Romania, “Hunyadi” in Hungarian.)

Significant expansions occurred later in the 17th century when defenses were fortified and architectural adjustments made.

The town, county, and castle all owe the name Hunedoara to the Hunyadi/Corvin family that once lived here. Though the name Corvin wouldn’t appear until later, the history of Corvin Castle is most closely associated with these two names – Hunedoara and Corvin, both belonging to the same family.

Who is buried in the Corvin Castle chapel?

Honestly, the lineage of Hunedoara family members who put their stamp on history is long and at times confusing.

Like his father, John was a brilliant military strategist. Both men are honored in Hungary and Romania for their bravery; they defended their borders from the Ottoman invasion of Europe in the 15th century.

In keeping with the customs of a typical hereditary monarchy, the castle and lands then passed from John Hunedoara to his younger son, Matthias Corvinus. Normally they would have passed to his elder brother, but he had been executed during a struggle for power.

Very Game of Thrones, isn’t it?

Matthias Corvinus, also known as Matthias the Just, later ruled as the much-loved King of Hungary for over three decades.

A stained glass window above John Hunedoara’s tomb in the chapel memorializes his grandson, Joan Corvinus de Huniad, the son of Matthias Corvinus.

Why is it called the Castle of the Raven?

It was Matthias Corvinus who was the first family member to take on the surname Corvinus, which in Latin means raven.

The raven had actually already been a symbol associated with the family for a long time before Corvin replaced Hunyadi/Hunedoara as the family’s surname. Since the castle was first built, they had a connection. The raven appeared on their coat of arms as their sigil, representing their family and lands.

The raven is the sigil of the Hunedoara/Corvin family.

But why the raven?

Locals look to a legend to explain why it’s called the Castle of the Raven and why the raven is so often shown with a gold ring in his beak.

This legend tells the story about a forbidden love between King Sigismund and the mother of John Hunedoara, Elizabeth Morsina.

Though she was already pregnant with his child, the King was unable to marry her himself. Instead, he arranged her marriage to his trusted military leader, Voyk. The King gave her a gold ring for the child so he could one day be identified at the royal court.

The woman treasured the ring for many years until one day, she left it unattended. At an outdoor picnic, it was spirited away by a curious raven with a penchant for sparkly baubles. A young John, already proving his prowess as a hunter, tracked down the bird, killing it and retrieving the golden band for his mother.

Years later when the boy had become a young man, he traveled to the royal court and told the story. So impressed was the King that he declared the raven would represent the Hunedoara family.

Though historians place little validity in the legend, the raven is very much a part of Corvin Castle’s history, regardless of its origins.

Plus it’s just a good legend!

Some castles are gorgeous on the outside, but dank and mostly empty inside. Others are the opposite, with a modest exterior but an exquisite interior. In this case, both the Corvin Castle interior and exterior are well preserved and worth seeing.

I think we explored just about every square inch of it. Take a peak at some of our favorites from inside!

The King of Hungary’s Bed Chamber

The largest and most beautiful rooms are two large halls: Knight’s Hall and Diet Hall, which is located directly above Knight’s Hall.

The two halls are similar, both with high vaulted ceilings, octagonal marble columns, and thick colored glass windows, bubbled and warped with age.

Over the centuries, several major fires racked the castle, and the Corvin Castle fire of 1854 caused severe damage.

Luckily, workers in the 1900s were able to salvage masonry from the wreckage and use historical documents to recreate Diet Hall in the image of Knight’s Hall. They tried to restore it as much as possible to its original 15th century design.

The Drawbridge from Above

Just past Knight’s Hall, visitors can climb a circular stairway to the upper floors of the castle with its many towers.

Though long since dry, a watery moat once surrounded the castle. This drawbridge would’ve been the only way to get inside.

Climbing the tower steps provides a nice view of the bridge to the castle and the Zlasti River below.

Make sure you don’t skip out on climbing to the top!

The spires of Castelul Corvinilor are known for the brightly colored, shiny tiles on the roofs, and the views of the surrounding countryside are soooo pretty.

During our visit to the towers, the town of Hunedoara sprawled sleepily in the intense afternoon sun. Even in the dry heat of fall, the trees throughout town threw off pretty shades of green.

Two of the most memorable towers are the circular Capistrano Tower, which was at one time used as a prison, and the Neboisa Tower.

The two towers are connected by the Neboisa Gallery, an enclosed stone walkway high above the ground. In Serbian, the name Neboisa means “Do not be afraid,” which is appropriate. It’s hard not to feel trapped in the long, dark walkway.

A deep circular well in one of the courtyards is at the heart of another castle legend. More tragic than the last, it tells the tale of three Turkish prisoners given the false promise of freedom.

The men were imprisoned by John Hunedoara, who promised he’d set them free if they dug a well in the castle.

So they started digging.

They dug for 15 years. By the time they hit water, the prisoners had dug a hole almost 100 feet deep!

Unfortunately, while they were busy digging, the King died. His wife then decided not to honor the King’s promise and had them put to death instead.

All that remains of them is a single inscription she allowed one of the men to scrawl on the wall outside the chapel:

The one who wrote it is Hassan, a prisoner of the gallows in the fortress near the church.

How sad is that?

If you’re standing next to the well at Corvin Castle in need of a pick-me-up, then don’t go up the stairs and walk around the outer walk.

It leads to the Bear’s Pit, where prisoners were once thrown to the bears – alive.

At least the Drummer’s Tower next to the well is really pretty.

In the courtyard, we paused briefly to admire several works of mosaic artist. We weren’t familiar with the Romanian artist but liked the couple of pieces he had on display.

If you’re lucky, the pieces will still be on exhibit if you happen to visit Corvin Castle.

Did you know you can get married at Corvin Castle??

Hot, tired, and thirsty, I was still completely jazzed after visiting Corvin Castle.

Not eager to leave, we sat outside the main gate and watched not one, but three separate wedding parties in progress on the grounds.

Can you imagine getting married at one of the most beautiful Romanian castles?

What’s next on our Romania road trip?

With a 2-hour drive still ahead of us, our final destination for the evening was Cartisoara, a tiny village at the foot of the Carpathian Mountains. There we’d be meeting up with our two Romanian friends to spend an afternoon with their wonderfully hospitable family members in Cartisoara.

After that, we’d travel with them for a couple of days before heading off in search of our own adventures in Romania – and we would definitely find them!

Are dogs allowed in the castle?

No! Make sure to leave your animals at home.

How much do Corvin Castle tickets cost?

The following prices have been updated as of April 2022. Make sure to check directly on the Corvin Castle website for their current prices.

Is photography allowed inside?

When is Corvin Castle open?

Their hours of operation change with closures due to local and national holidays. For current hours, check the castle website.

More of Our Favorite Places in Romania

Take a minute to PIN it!
70 shares

Type to search or hit ESC to close
See all results
wpDiscuz
3
0
Don't forget to leave a comment!x
()
x
| Reply