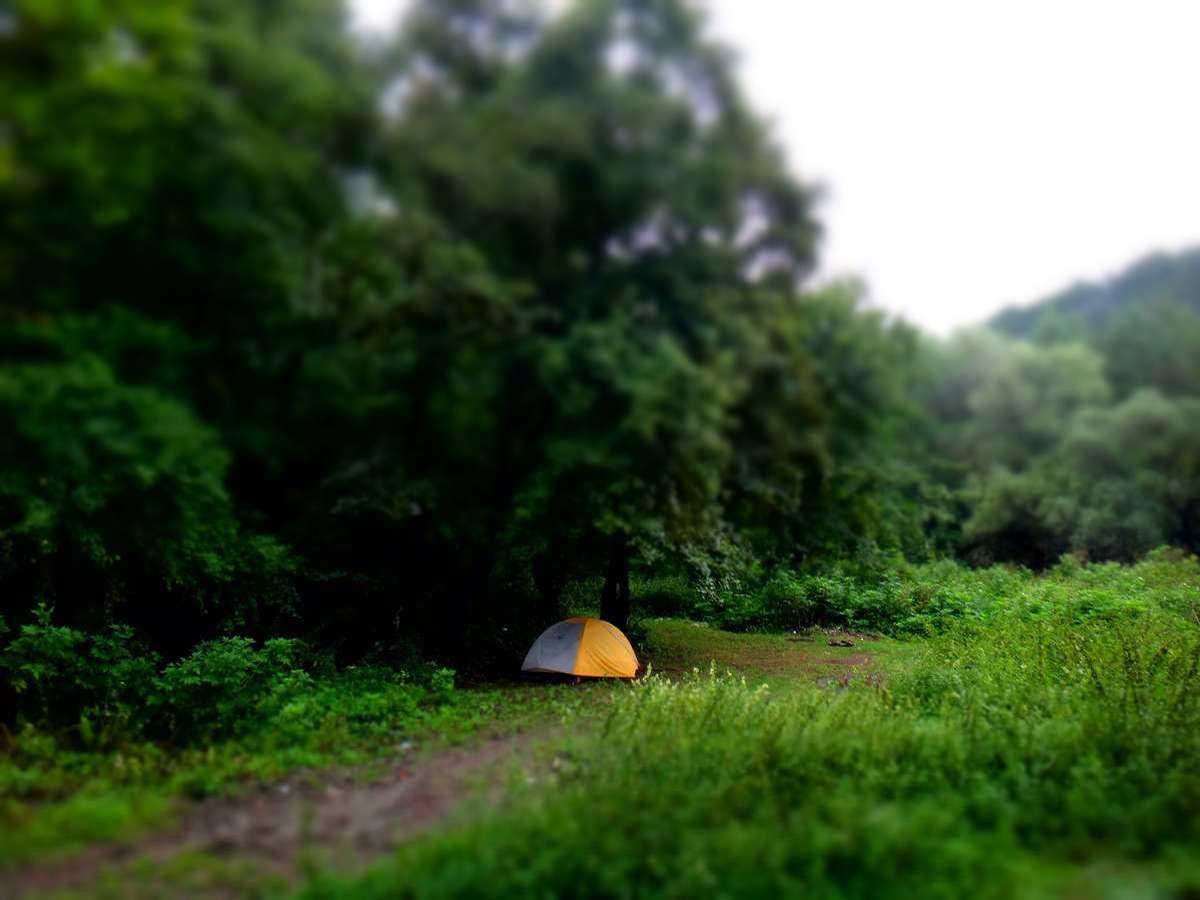 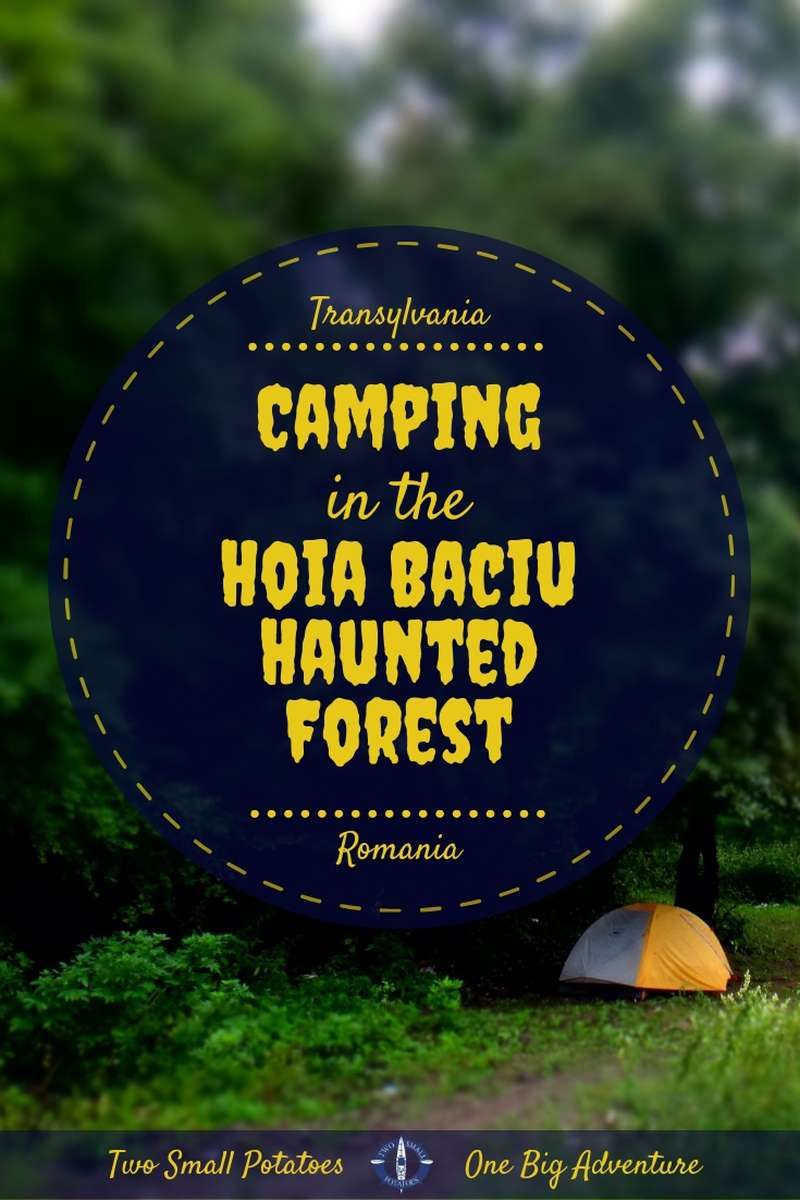 Legends abound about a small patch of woods in the heart of Transylvania called the Hoia Baciu. Documentaries have filmed its mysterious crooked trees, and photos have captured suspected UFOs hovering over it.  In the center of the forest, nothing will grow in a strange ring of bare dirt in the middle of a grassy meadow.   Sometimes referred to as “the Bermuda Triangle” of Romania or by others as the “Shepherd’s Forest,” legend tells the tale of a shepherd and his flock of sheep who entered the forest and were never seen again.  Folks claim it harbors evil spirits, and reports of physical sickness after entering the woods are common.  Some locals won’t go near it.  Is it all just a bunch of hype?  Clearly, we had to find out!  If there was anywhere we needed to camp while in Romania, it was the spooky Hoia Baciu Forest.

The tricky thing is that there aren’t any designated campgrounds in the forest.  That’s actually a good thing when one is in search of ghoulies and ghosts, but it also means it’s not easy to even find your way into the forest.

We rolled into the town of Cluj Napoca bordering the forest after an eventful day exploring Sighisoara and the Turda Salt Mine.  With a single road leading into the woods and one primary unmaintained loop road around it, we quickly realized that our VW was not an equal match for the southern stretch of road.  Clinging to the hillside, the road curved sharply upward, unpaved and so narrow we couldn’t find a place to ditch the car to hike in.

Backtracking, we drove around to the northern edge and found a road so pot-holed it resembled an aerial view of Austria’s lakes district.  Ample rain had filled the holes, which overflowed and merged into the next, so that we found ourselves inching our way through the shallowest water, aiming for intermittent rocky stretches.

We passed increasingly decrepit cars in front of dilapidated houses, soggy stray dogs plodding along in the rain, and a solitary rusted-out rail car on a stretch of abandoned train tracks.

The scene played straight from a Merle Haggard song.

Leaving the houses and cars and dogs behind, we followed our muddy track into the woods until we could drive no more.  Wheels spinning in the thick muck, we pulled a bit further out of the rain beneath a stand of trees.

Suddenly illuminated by our headlights, a white sign flashed out in the darkness.

The Romanian writing escaped us, but any sign that opens with ATENTIE!!! and illustrates a person pointing a gun at a blank-faced man with creepy eyes can’t be good.

We would later translate the sign to find out it’s simply a safety advisory for the folks who visit the woods on weekends to shoot Airsoft rifles.

Be safe and wear protective eyewear.

I’ll admit that the incessant dripping of rain water on leaves was a bit eerie, grey light sickly in the gloaming.

Tent pitched and dinner devoured, I lay awake, waiting for something to happen.

Finally, something did happen – I fell asleep.

Sadly, the sign was the scariest thing about our night of camping in the Hoia Baciu Forest.

We awoke the next morning to the same dripping forest – devoid of ghosts, UFOs, or mysterious apparitions.  Perhaps they had been scared off by our ferocious 4-kilo rat terrier who stood guard through the night.  She may look small, but…

Well, she really is just small.

Disappointed that I’d slept better than just about any night while in Romania, we pulled our ace in the hole: we had a Hematogenas.

We’d gotten it from our Lithuanian roommate.  She hadn’t planned on us consuming it in Romania, merely telling us they’re popular in her country and that they’re great for boosting low iron.  But never has there been a better place to consume a blood bar than in a haunted forest, even if it’s only a last-ditch effort to try to draw out some sort of wee beastie.

Some might even think it worked when they see the mysterious blurred image we snapped while eating the blood bar.  I’m afraid it’s much more likely due to our beat-up old digital camera and Travis’s shaky selflie skills, but if you’re a believer, you just go right on believing.

I do actually believe in ghosts and spirits – things that go bump in the night and can’t be explained.  Maybe it just makes life a little more exciting and none of it’s true, but what’s life without a little mystery?

Perhaps we should have pitched our tent directly in the circle.  Maybe the creepy sign scared the ghosts away.  Or maybe they were scared away by the smell of cow’s blood from our hematogen bars.

Even though our night in the Hoia Baciu was less scary than driving in Romania, it still tops our list of fun and memorable experiences to have in Europe.