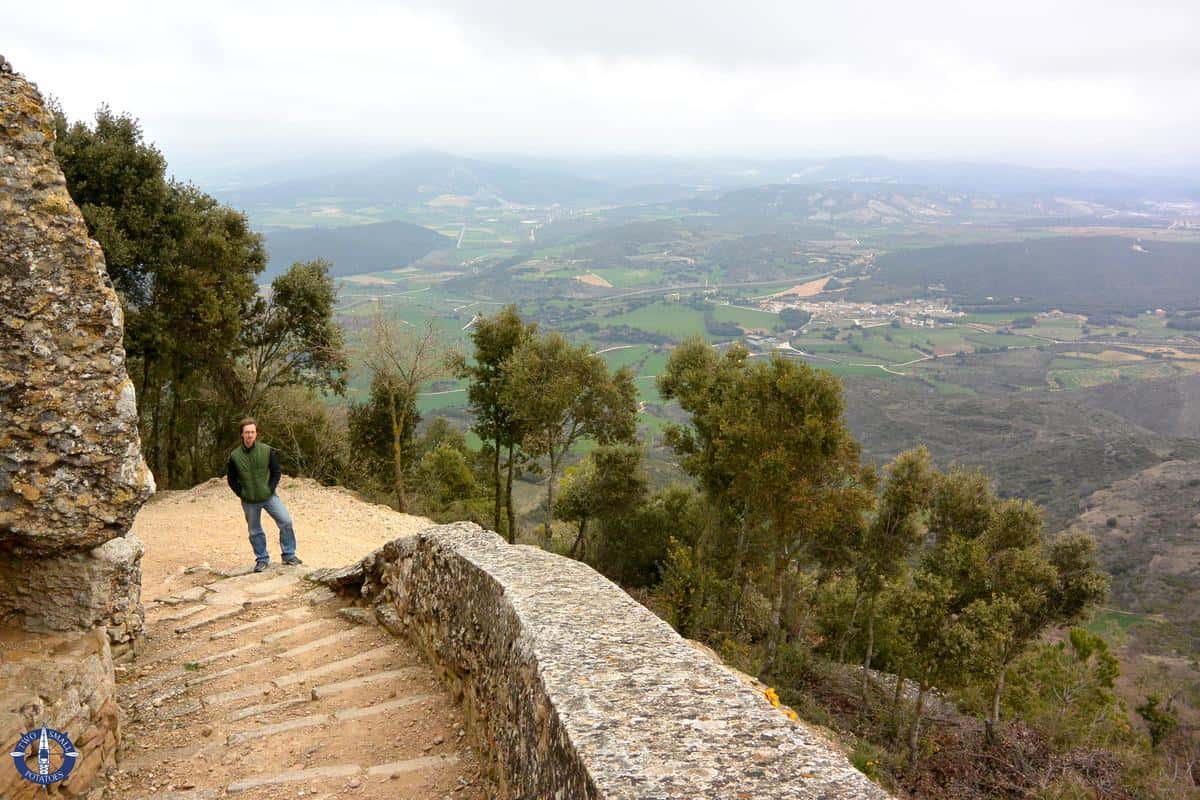 The Most Romantic Easter, Camping at Castillo de Monjardin 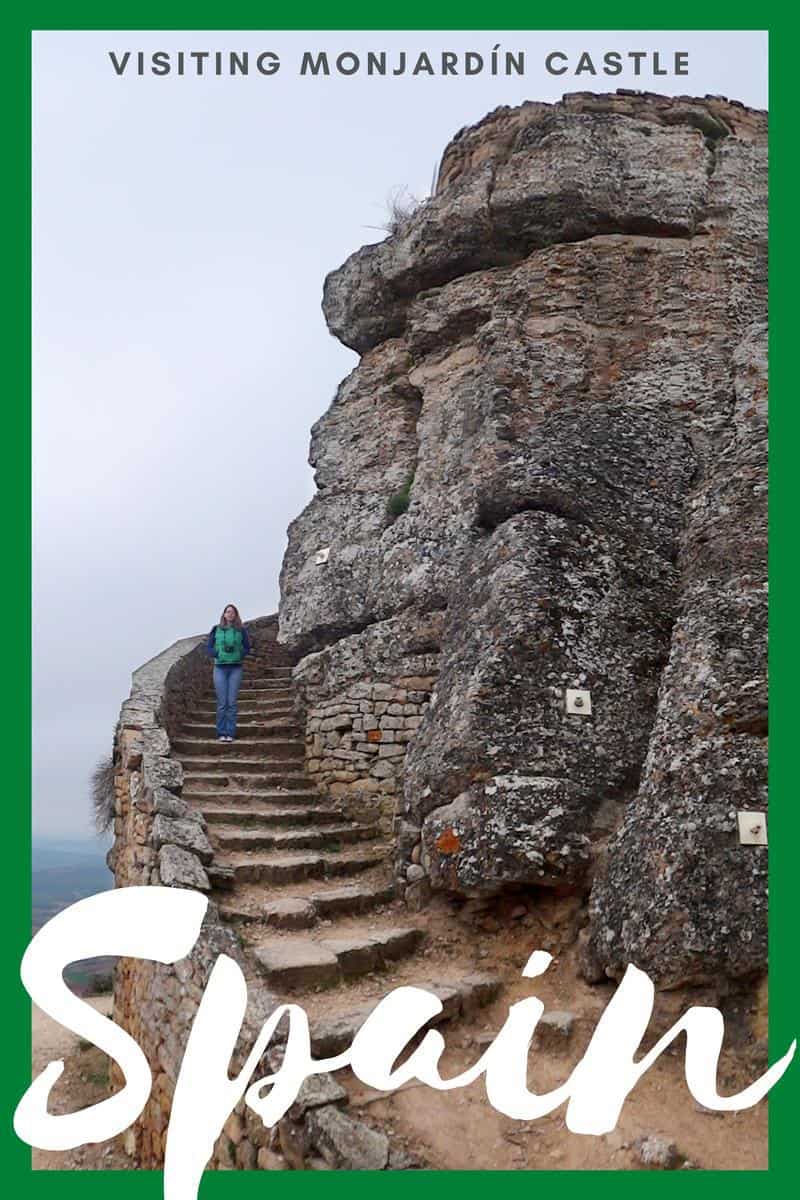 Ya’ll should know by now that we’re not your typical travelers. We can’t go from Point A to Point B without stopping to investigate absolutely anything that might strike our fancy. This was very much the case during our road trip from Switzerland to Spain. After spending a day in Pamplona, we hit the road again in the early evening. Knowing we wouldn’t make it to Madrid before dark and that we’d need to stop driving soon, we planned to find a camping place nearby.

Not far from the town of Logroño but still in the region of Navarre, we saw a large rocky mound high up on a hill, barely visible in the fading light of day. It appeared to be some sort of castle or fortress, but not one with the clear silhouette of a castle on a hill we’re accustomed to seeing in Europe. Below it, the slopes of the small mountain were covered with trees that gave way to a charming little village and acres of red-earthed vineyards.

Who wouldn't stop to investigate a mysterious hilltop ruin at night in the middle of Spain?? Click to Tweet

The orange pin marks our travel for day two, from Pamplona to our evening at Castillo de Monjardin in Spain. The blue line roughly follows our entire 10-day travel path.

A Night at Monjardin Castle in Navarre

On a whim, we pulled off the only road we saw into town and snaked our way through the tiny village, making turns we thought might lead uphill.

Sure enough, we found a sign with the name Castillo de Monjardín pointing up a one-lane dirt road that provided little challenge for even our very low-carriage 4WD VW. Our old 4Runner would have outright mocked this poor little country road with its minor ruts and potholes. Still, it felt good to be doing a little off-road adventuring!

Topping the final rise, we hopped out of the car and investigated what looked like a large old pile of rocks topped with a spare metal cross.

It really was a castle, albeit one that stopped being maintained long ago. Not only was it slowly crumbling back into the earth and a bit eerie in the twilight, but it was completely deserted.

This was our kind of place!

Absolutely in love with the views, the seclusion, and the sheer romance of the place, we decided to stay and camp for the night.

When we travel, we prefer to explore without being limited by the availability of restaurants or hotels, so we pretty much always have an assortment of food sufficient for at least a few meals. We set about making some chili for dinner with our camp stove. Savoring it with a loaf of fresh bread we’d bought earlier in the day, we thought about the wars that raged in these lands over the centuries.

Breaking into a moment of quiet reflection, Travis said,

Do you realize that a thousand years ago on this same spot, someone died ? Right here?

Gah! Food for thought, Travis. Thanks.

Despite his dark ruminations, we were graced with a  beautiful sunset as night fell, making it a truly unforgettable Easter.

I fell asleep excited to investigate the entire Castillo de Monjardin castle the next morning.

The morning of the third day of our road trip to Madrid, I woke up to faint light tapping at my eyelids. Tentatively poking my head from my toasty sleeping bag, I breathed deeply, recoiling back inside my bag as the air reached my lungs.

Not like a morning-on-Everest cold, but colder than I expected, or liked. I certainly had no desire to leave my warm cocoon. I love camping, but this part is always hard for me.

I darted envious looks at Travis, who’s completely immune to the cold, and found myself wishing I could find a way to harness his heat and wear it like an electric Snuggie. Knowing that an abandoned ancient castle was waiting to be explored just a few meters from us was enough to finally compel me into the cold air, where I quickly pulled on more layers of clothing.

We broke camp, packed up the car, and made sure we left no trace we’d ever been there. Then we set out on the loop trail encircling the compound of the Castillo de Monjardín (Monjardin Castle) – more formally referred to as Castillo de San Esteban de Deyo.

Compared to many European castles we’ve seen, the entire complex is rather small, though the start of the trail is at its narrowest point and continues along for a rather respectable distance before reaching the opposite end, which is accessible via a flight of old stone steps.

Though the castle hasn’t been restored, concrete has been used to fill gaps at its base, and huge metal spikes have been driven into the stony mass to help stabilize and preserve the structure.

We climbed the steps slowly, impressed with the stunning, panoramic views of the patchwork green hills and vineyards far below.

Even with heavy slate-gray skies and frigid wind, the views from the top are stunning.

Unlike many castles that have become major tourist attractions with modern cities surrounding them, I imagine that the countryside possibly looks today much as it did centuries ago with the exception of the paved highway running through the valley.

The sign in Spanish at the entrance of the castle provides little information as to its history except that much of it is a mystery. Even the date it was originally built and the identity of those who constructed it are unknown.

It’s suspected that the Romans built it, as they built so many things in Europe.

During much of the 9th century, it was under Arab rule until it was conquered in 907 by King Sancho Garcés, the king of Pamplona. Over 1,000 years ago, he could very well have stood on the same spot as we were, surveying these lands gained in conquest.

It is said that the Romans built it, the Moors made it strong, and with God’s help, the Navarros conquered it.

Mounting the steps with small tingles of excitement, I wondered what, if anything, would meet us at the top.

Sadly, the gate at the end of the stairs was closed and securely locked, leaving us to stare straight up the castle face and ponder the significance of a small monument topped with an iron cross.

With faces smushed against the cold metal bars, we tried to see as much of the inner sanctum as possible.

What must it have been been like in the 1300’s when merchants from the East traveling the Camino de Santiago brought the bubonic plague to this valley?

Pilgrims and villagers would undoubtedly have inundated the castle, praying for relief from the Black Death that decimated the region’s population, erasing an entire village, Adarreta, from the map.

Shivering in the cold, I descended the stairs, balling my hands into fists in my vest to try to thaw numb fingers.

We were both hungry and it was ready to go, but I lagged behind Trav to take in the views a moment longer.

Back in the car, we cranked the heat and cracked into a package of cervelas, the national sausage of Switzerland that we had brought from home.

Traditional versions of this sausage supposedly used to include pork brains, an ingredient I was glad to discover is no longer used in their production. Though cervelas differ widely and have different names in the French, German, and Italian speaking parts of Switzerland, the interior texture of our particular sausages reminds me a bit of an American hot dog but with a much tougher exterior and a nice, smoky flavor.

They undoubtedly would have been better over a campfire or BBQ grill, but since we had access to neither, we ate ours cold, grateful just to have something to fill our grumbling stomachs.

In the daylight, the castle was more visible on the hill than it had been the evening before.

Navigating a few decent potholes, we quickly dropped back down into the village, Villamayor de Monjardín.

Vineyards throughout the valley were burning large piles of natural debris, adding to the already gray day.

As we dropped back down into the sleepy little village of Villamayor de Monjardín, we could see the spire of the Iglesia de San Andrés dominating the center town.

Pungent smoke obscured our last views of the Castillo de Monjardín, slowly giving way to acres of rich, red soil and neat rows of grape trees where vineyards striped the hillsides beneath the castle.

Stopping briefly at a tiny tienda in town, I chatted with the shopkeeper and asked her about the various wines for sale in her shop. She proudly explained the characteristics of the bottles we placed before her.

Two of them were labeled Vendimia Nocturna, a type of wine in which the grapes are harvested at night, a practice gaining in popularity. Sugar levels in grapes are more stable in cooler temperatures, which prevents unwanted or premature yeast fermentation and high energy costs necessary to cool the grapes before crushing in warm climates.

With romantic images of dark, ripe grapes glistening at harvest under a full moon, I chose a bottle of Rosado De Lágrima (Pink Teardrop) for Carlos and Nicole to thank them for watching Touille for us, a bottle for our roommate, Gintare, who was caring for our kitties during our absence, and another bottle for a friend who loves Spanish wine.

Happy to have found a few gifts for friends and looking forward to our next big attraction for the day, Burgos Cathedral, we hopped back on the highway and headed west.

Know Before You Go
Take a minute to PIN it!
6 shares