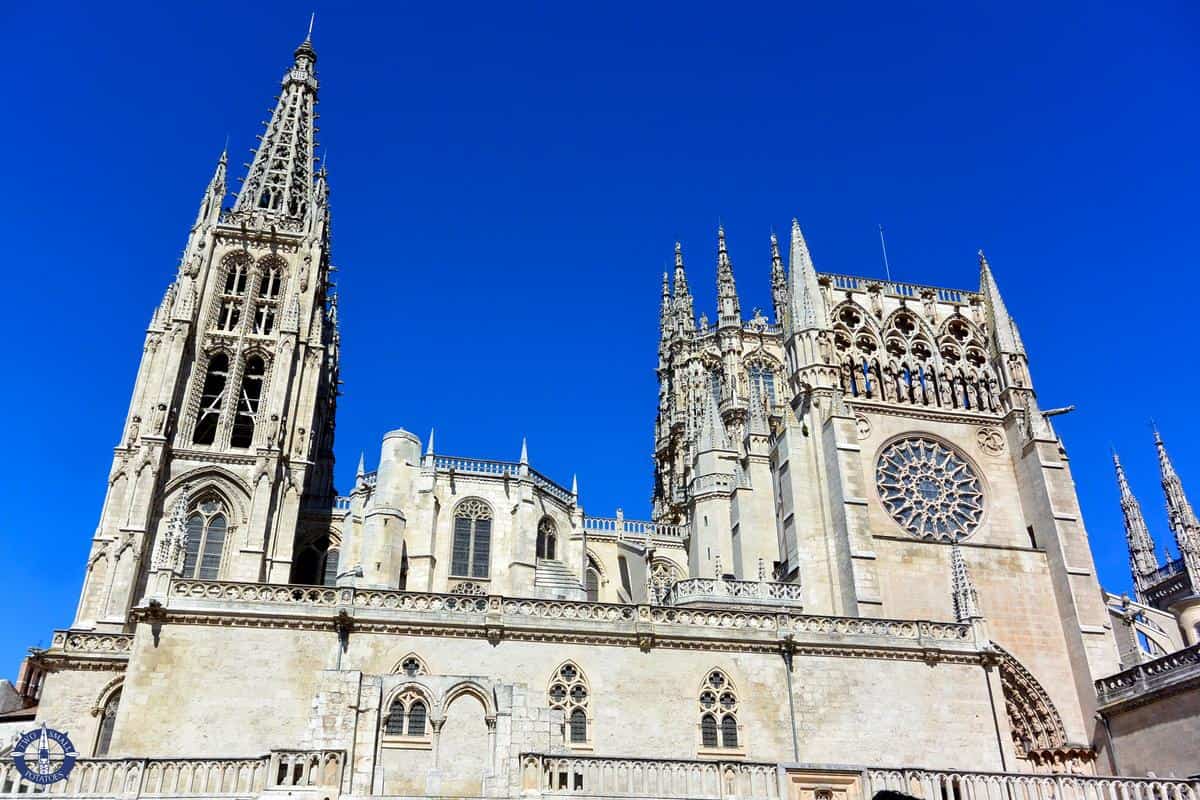 Spain
April 6, 2015 4
*This post may contain affiliate links. If you purchase through these links, we may receive a small commission at no extra cost to you. We only recommend companies we trust! 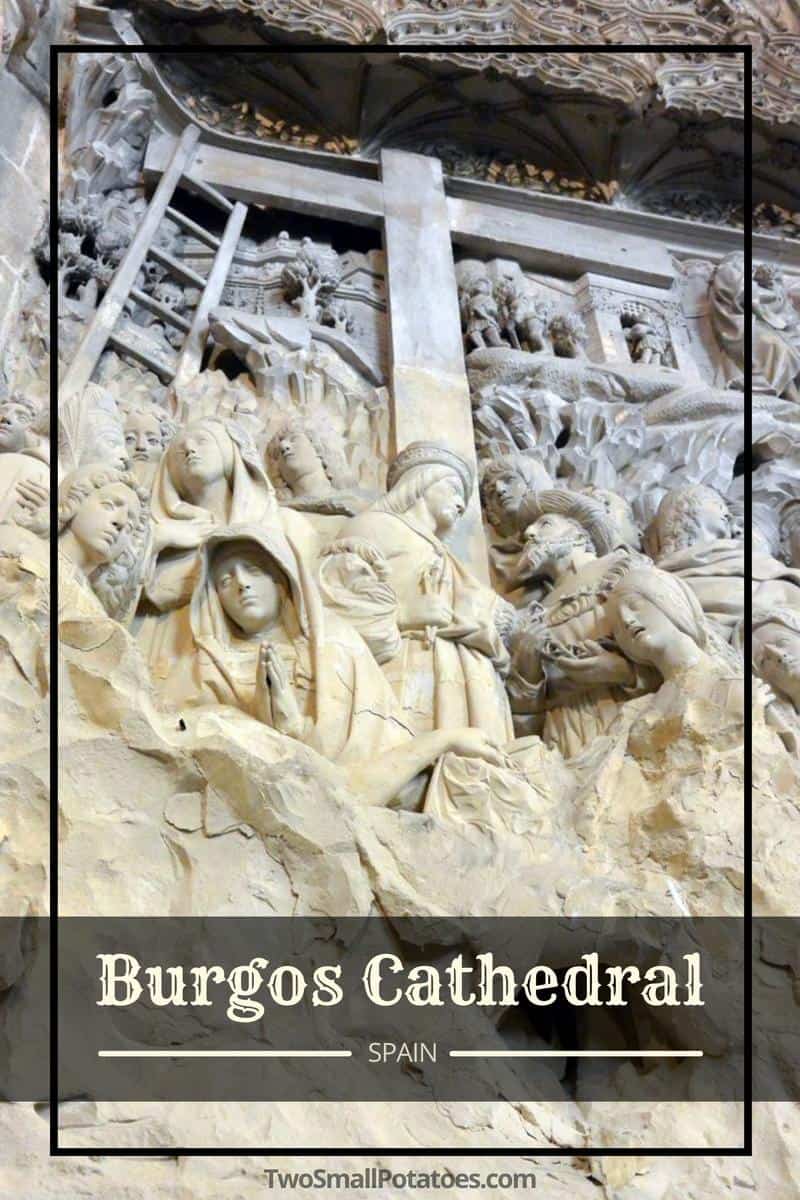 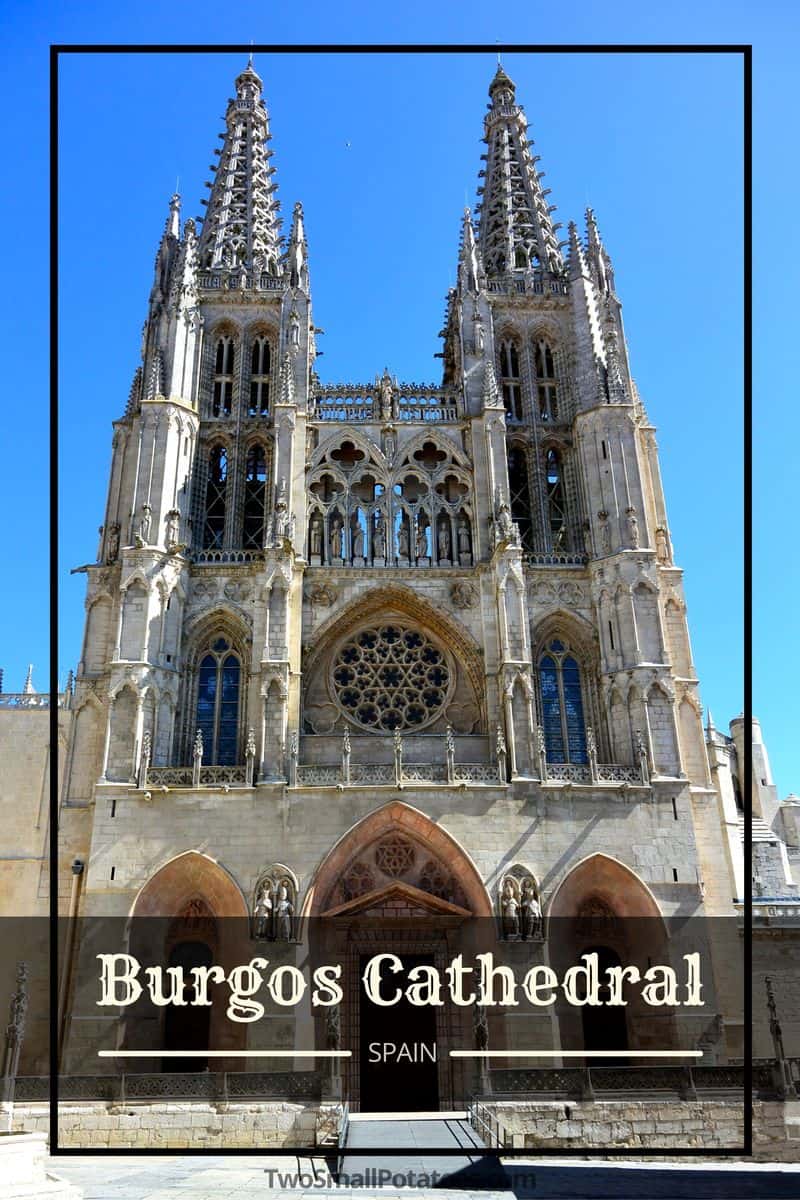 To date, Burgos Cathedral is the most stunningly beautiful cathedral we’ve seen in Europe. It’s unsurpassed in its architectural design and interior artwork. The massive sanctuary is Spain’s oldest Gothic cathedral, the third largest in the country, and it has been listed as a UNESCO World Heritage Site since 1984. Despite that and it’s stunning beauty, it remains a hidden jewel in Spain’s northern region.

With our unexpected detour to the charming Cave Hermitage of Tosantos behind us, our last stop before reaching Madrid on our road trip from Switzerland was the town of Burgos. Our Spanish friend Alicia had suggested we visit Burgos Cathedral. Without even looking at photos in advance, we added it to our road trip itinerary solely on her recommendation. We’ll always be grateful for her suggestion.

If you have the chance to visit any single church in Spain, visit Burgos Cathedral!

Burgos Cathedral in northern Spain is the country's oldest Gothic cathedral and a hidden UNESCO gem. Let these photo highlights inspire you to visit! Click to Tweet

The yellow pins mark our travel for day three, from the Castillo de Monjardín to Burgos and then Madrid. The blue line roughly follows our entire 10-day travel path.

While Trav navigated us to the cathedral with his map app, we wondered what to expect. Even when we parked on a side street just a block above it, we still hadn’t caught a glimpse of its spires. Since it’s built on a hill, it was completely hidden behind the buildings below us.

Zigzagging down a short series of curving cobblestone streets toward the catedral, I felt like a kid on Christmas day, when anything can be in the box.

The street abruptly opened into a small plaza lined with lovely apartments. Suddenly the cathedral was just there, filling the entire city block like a sleeping giant.

Making our way through the plaza around to the front of the cathedral, the pleasant smell of marijuana floated past us on the warm spring breeze.

Small groups of pilgrims from the Camino de Santiago lounged in the plaza. They were easily identifiable by the seashell adornment on their backpacks and walking sticks.

We found the ticket office and took one last look up at the impressive length of its southern face.

The main entrance to Burgos Cathedral is via the ornate Sarmental Facade on the south face.

A Brief History of Burgos

Construction on Burgos Cathedral began in 1221 on the orders of King Ferdinand III. Though it was already in use within nine years, work continued intermittently until it was officially completed over 300 years later.

Prior to 1221, modern humans had been living in the region of Burgos, Spain for so many millennia, it’s difficult to even conceptualize time on such a broad spectrum.

Romans, Visigoths, and Arabs all conquered and occupied the region before Spaniards reclaimed it in the 9th century. Building castles and establishing settlements to defend their newly regained lands, the Spanish created the town of Burgos as one such settlement.

Founded in 884, it was a Christian enclave created by gathering together members of outlying land into this one central location to expand and protect Christendom. The cathedral stands as a testament to this holy objective.

Highlights of the Burgos Cathedral Interior

As soon as you enter, you’ll realize that this cathedral is as grand inside as it is on the exterior.

You could spend all day exploring the 15+ individual chapels inside and never see every painting, sculpture, and ceiling embellishment.

We gawked a bit just inside the entrance, then picked up our audio guides and started exploring.

As we worked our way slowly through each of the chapels, I struggled to focus on the audio guide pressed to my ear.

The woman’s low, slow voice and measured words so complemented her esoteric explanation of the minute details of the cathedral’s trappings that I couldn’t listen. I found myself trying so hard to focus on who commissioned what artist in what year to create this or that sculpture, retablo, or painting that I couldn’t just enjoy the beauty of the cathedral.

Imagine a 2-hour history lesson from Downton Abbey’s Lady Mary Crawley, and you’ll understand what the audio tour is like.

That said, the audio guide is available in lots of languages and is free with the admission ticket. We recommend it even if the content is a bit dry. We’ve never before or since had such an exhaustively informative audio guide for an attraction.

Perhaps the most unusual piece of art, or at least the one that least seems like it belongs in the cathedral is visible just inside the main entrance.

If you time your arrival on the hour, you’ll not only hear but you’ll see the peculiar Papamoscas Clock in action. The bust of the funny little Papamoscas man opens and closes his mouth rhythmically while ringing his bell to mark the time.

Travel Tip: Noon is the best time to catch the Papamoscas Clock since it strikes twelve times.

We didn’t know anything about the clock and were completely startled when the reverent silence of the cathedral was abruptly broken by his loud clanging.

Why the clock is there, who created it, and why el Papamoscas opens and closes his mouth like a fish out of water is still a mystery. I found one legend explaining its existence, but I really have no idea why such a strange and incongruous clock would be displayed in this particular cathedral.

Chapel of the Presentation

The Capilla de la Presentación, or Chapel of the Presentation, is one of four octagonal vaults inside Burgos Cathedral. Its star-patterned ceiling is the most ornate and complex among the four.

The chapel was commissioned by the Lerma Polanco family in the 16th century. They hired architect and master mason Juan de Matienzo, who drafted the plans in 1519.

Besides the ornate ceiling, the chapel is notable for a decorative black wrought-iron gate between the chapel and nave, an alabaster statue of the chapel’s patron, Canon Díaz de Lerma, and an immense golden altarpiece framing a painting of the Holy Spirit.

One of the most iconic sites in the cathedral is The Golden Staircase (La escalera dorada).

The marble, black, and gold staircase was designed by Italian architect Diego de Siloé in 1523. The inner stairway leads to the exterior Puerta de la Coronaría, or Door of the Apostles, which is closed to the public.

It was inspired by the Cortile Belvedere staircase in the Vatican. Later it became the inspiration for the staircase of the Paris Opera.

The Chapel of San Enrique is newer than the Chapel of the Presentation. It was built between 1670 and 1675 as the burial place for Archbishop D. Enrique Peralta y Cárdenas.

The chapel is especially noteworthy for its elaborate retablo, or altarpiece, centered around a sculpture of Ecce Homo, which is Latin for “behold the man.” The phrase is commonly portrayed in Christian art.

According to the Gospel of John, these were the words spoken by Pontius Pilate when he presented Jesus to an angry mob before his Crucifixion.

The chapel also has its original organ from 1674, and if you look up near the entrance, you’ll see the oldest rose window in the cathedral.

The Main Chapel and Altarpiece

The main chapel is at the heart of the cathedral.

By the time you arrive, you might feel a bit overwhelmed, but definitely don’t skip this!

The dark gold of the main altarpiece isn’t the most beautiful, in my opinion, but it absolutely dwarfs the altars in the side chapels. It’s so big, it actually makes the main chapel feel small – and it’s huge!

The ceiling of the main chapel is one of the two most beautiful in the cathedral.

Often referred to as “the lantern,” the vaulted ceiling consists of multiple arches beneath an upper cupola with two tiers of walkways around a star-shaped skylight.

Not far from the main altar and the central choir are the interred remains of Rodrigo Díaz de Vivar, a famous Spanish nobleman and military hero, and his wife Doña Jimena.

More familiarly known as El Cid, the heroic deeds of this Christian knight were famously portrayed in the 1961 film with Charlton Heston and Sophia Loren. The real-life hero lived during the 11th century.

It’s easy to miss the tomb, which is a plain red slab of stone in the floor bearing an inscription in Latin identifying it as the tomb. The stone is marked off by red ropes.

The Chapel of Santa Ana, which is also called the Conception Chapel, houses one of the most treasured gems in Burgos Cathedral – its altarpiece by artist Gil de Siloé.

Dating from 1486, the golden retable against a starry blue sky features ornate scenes of vines intertwining the Virgin Mary, the Virgin with Child, and Judah’s kings.

The central theme is reverence for the Immaculate Conception of the Virgin.

Chapel of the Constables

After leaving the main chapel, we finally reached the Chapel of the Constables (Capilla de los Condestables), one of the most famous in the cathedral.

The octagonal vault features an ornate skylight, and the star’s points are tipped with golden sun bursts.

The Chapel of the Constables was built for Don Pedro Fernandez de Velasco and his wife, Doña Mencía de Mendoza. They were benefactors of the cathedral.

Their remains lie beneath a statue of them carved in Carrara marble.

The inner halls are lined with statues and religious art.

The festival of Corpus Christi is one of the many celebrations held in the city of Burgos, Spain. The religious event is held every year in June and honors the presence of Jesus in the Eucharist.

A stunning winged chariot used in the annual procession is typically on display at Burgos Cathedral.

The Sacristy (Sacrestía Mayor) is the room where the clergy dress and store items of value.

The ceiling is richly decorated with colorful scenes of Christianity. It’s worth seeing.

I lost track of how many hours we spent exploring the many small chapels inside Burgos Cathedral, but we didn’t leave until it closed. It was so beautiful and filled with so much art, it’s one of the few religious buildings I’d visit a second time as a tourist attraction.

Wondering how it could be possible to top such a fantastic sight, we left the cathedral and returned to our car, grateful that we would finally reach Madrid in the evening.

We were looking forward to seeing our friend Alicia, whom we hadn’t seen since she’d lived in Oregon years before. This would be our first visit to Madrid, a city we’d always wanted to visit, and we couldn’t wait to experience it with Alicia, a local who grew up in Madrid.

Little did we know what she had planned for us!

Know Before You Go
Take a minute to PIN it!
51 shares