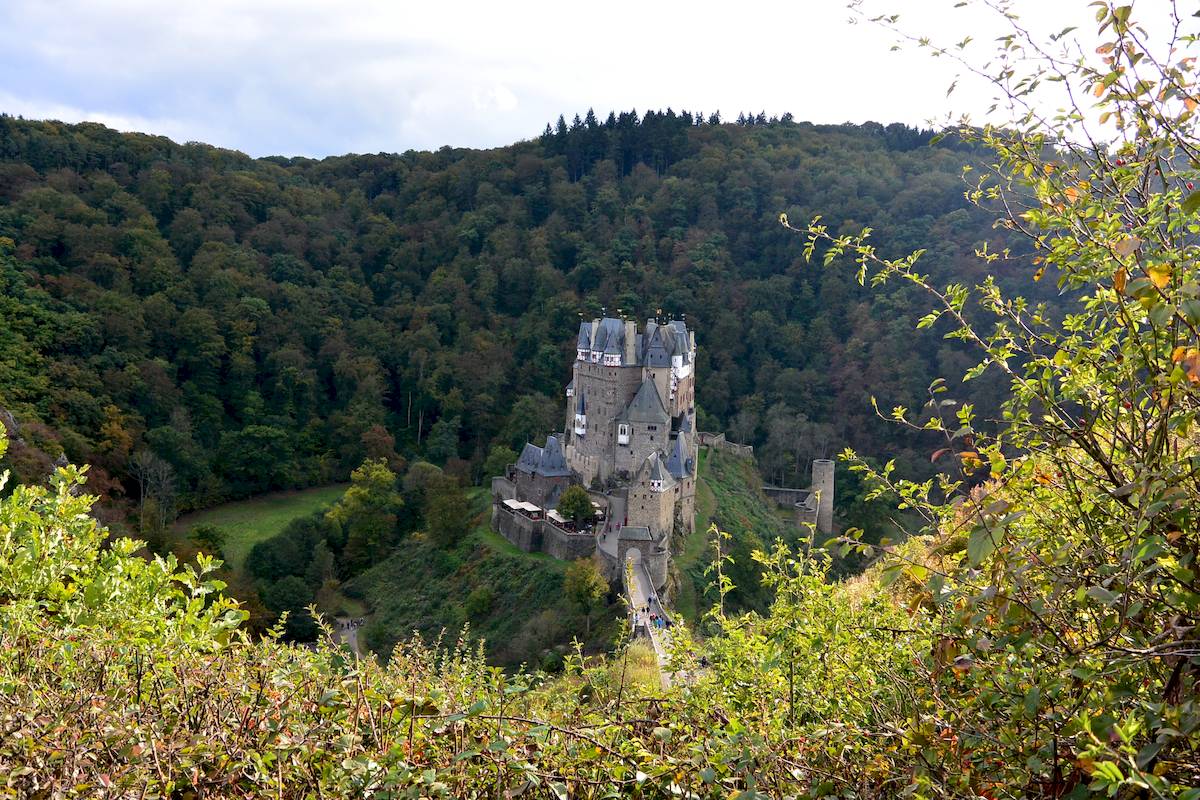 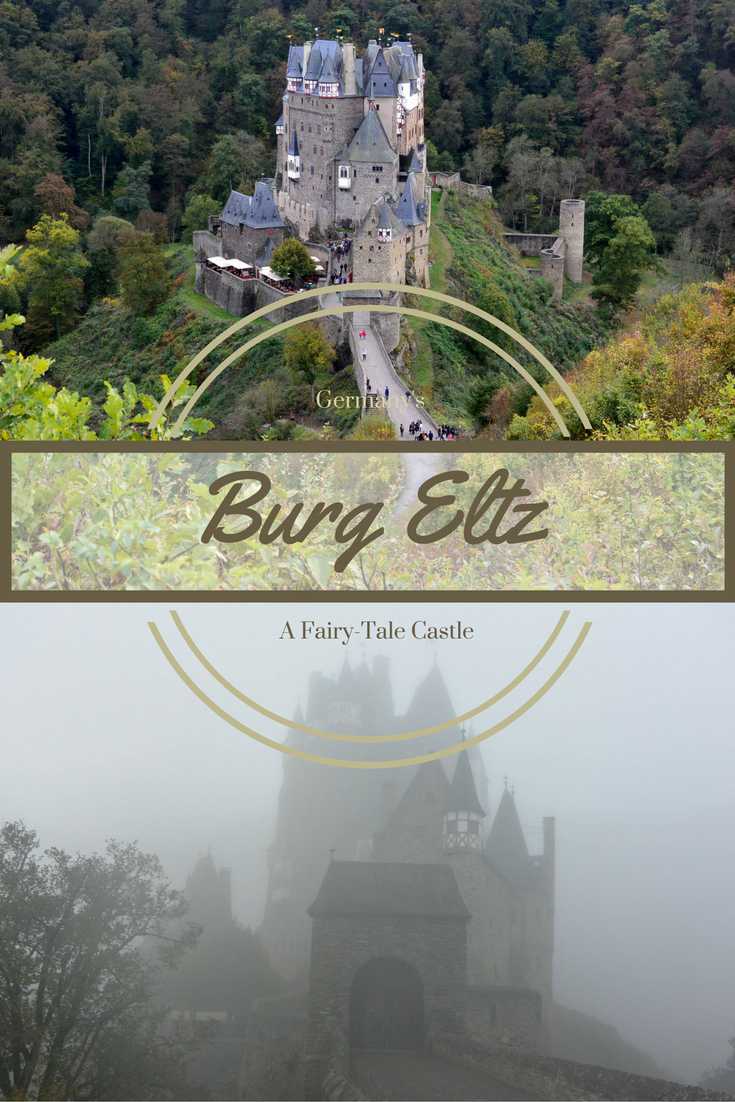 Ok, we get it.  Some of you loyal readers are perhaps getting a bit tired of seeing our posts about one German castle after another. But we ask you to bear with us for one more castle – just one more! Perhaps you’re planning your first trip to Germany and are trying to prioritize what sites to see.  Or maybe you’ve been before and love visiting castles.  If that’s the case, you might already be familiar with Burg Eltz, but on the off chance you’re not, we think it’s worth seeing – even if you’ve already toured 100 other castles in Germany.

For the past 850 years, Eltz Castle has nestled on a small hill in Germany’s Moselle River Valley.  The locals proudly proclaim Eltz is the second most famous castle in Germany, second only to Neuschwanstein in southern Germany.  After visiting, we can see why!

The castle is truly like something straight out of a German fairy tale. Narrow gabled turrets tilt precariously over the hillside below.  The shiny stretch of the Elzbach River curls around the base of the castle’s relatively small earthen foundation.  A narrow, cobblestone road leads over an arched entryway, serving in lieu of a drawbridge. Thick green forests blanket the surrounding slopes.  Further up the hill, the road to the castle has long since been paved but remains closed to the public.  Instead, visitors hike from the castle’s public parking area and bus drop-off a kilometer away.

Although many of the castles in Germany are as old, or even older, than Burg Eltz, it’s unique in that despite its age, it remains a genuine reflection of the original castle as it was first built.  It has survived nearly nine centuries without meeting the fate of so many of its medieval counterparts – succumbing to fire, invasion, or simply the ravages of time.

Not only has Eltz Castle never been conquered, but it still belongs to the descendants of the original owners from the 12th century. Historically, three different branches of the Eltz family have resided in the castle, dividing it into three separate sets of living quarters and building to suit each family’s needs.  The sections of the castle quarters that are now open to the public belong to two of the branches of the family that live off-site.

Members of the third branch, the Eltz-Kempenich family, inhabit living quarters that are private from visitors.  On the castle’s website, the Count and Countess Eltz warmly invite visitors to Burg Eltz, and a recent family portrait inside the castle encourages visitors to enjoy their home.  It’s a unique experience to tour a medieval castle in immaculate condition and realize that a modern teenager living there is likely texting her boyfriend about prom just a few rooms over.

Folks at the castle also offer a pretty fantastic tour of the interior rooms.  Tours are offered every half hour or so, and they’re available in multiple languages.  Like the exterior, the interior rooms look much as they did centuries ago with original furnishings, tapestries, and weapons on display.  We lucked out by getting in on the last English-speaking tour of the day.  Because we had a small group and an enthusiastic guide, our lively tour took close to an hour. Unfortunately, photos of the interior rooms aren’t allowed, but we still absolutely recommend the tour.

If you have to wait a bit for your tour to start, you can always visit the treasury.  Spread out over several floors of the castle, it’s a treasure trove of interesting family artifacts.

Burg Eltz is not nearly as crowded as Neuschwanstein Castle, but it’s still quite popular.  We recommend that for photographers or folks who want to avoid the crowds, aim for visiting in the early morning or late evening when it’s largely deserted.  If you want to do that but still catch the tour of the interior, it might mean visiting twice, like we did.

We enjoyed the castle so much, we visited in the evening for the tour and hiked out the next morning with our dog for another peek at it.   A surreal scene lay in wait for us. The entire valley was blanketed in fog so thick the castle was but a dim outline in the murky air. It was absolutely eerie, entirely fitting for an 850-year-old fairy tale castle.

Germany is home to over 20,000 castles. Share our quick travel guide to let others know why #Eltz Castle should be at the top of their travel #bucketlist. Click to Tweet

The fog followed us as we left Burg Eltz and drove back to our guesthouse in Wierschem, the last village on the main road to the castle.  We’d found and booked our stay at  the Hotel Landhaus Neuhof entirely last minute, but we enjoyed our stay there so much, we debated about canceling our plans to continue on to the pumpkin festival in Ludwigsburg in order to spend the day leisurely exploring more of the Moselle Valley.

In addition to the castle, the region is well known for its terraced vineyards, outdoor activities along the Moselle River, and local restaurants serving hearty local German cuisine.

In the end, we opted to check out as planned and continue on to the pumpkin festival.  It was difficult though to leave the hotel.  With the early morning sun just cracking through the fog, it glinted on every blade of grass in the surrounding pastures.  In the distance, a man paused to pet a horse when it trotted up to say hello.  If a sense of peace is what you’re after, you’ll surely find it here.  Even in Germany, where stunning castles and pastoral landscapes are almost commonplace, it feels as if the Moselle Valley is perhaps a land of the fairies.

Sharing is caring.  Take a minute to PIN it! 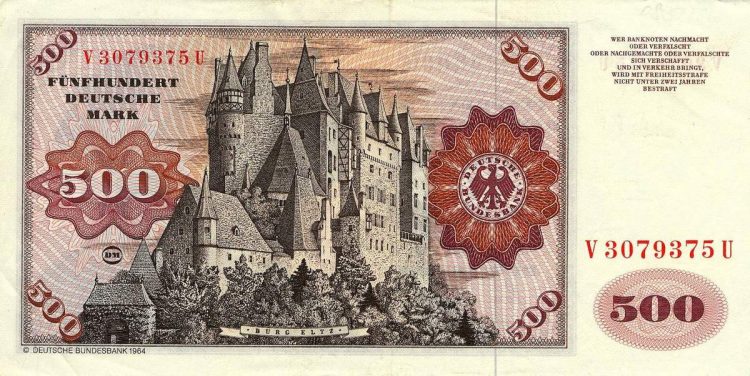