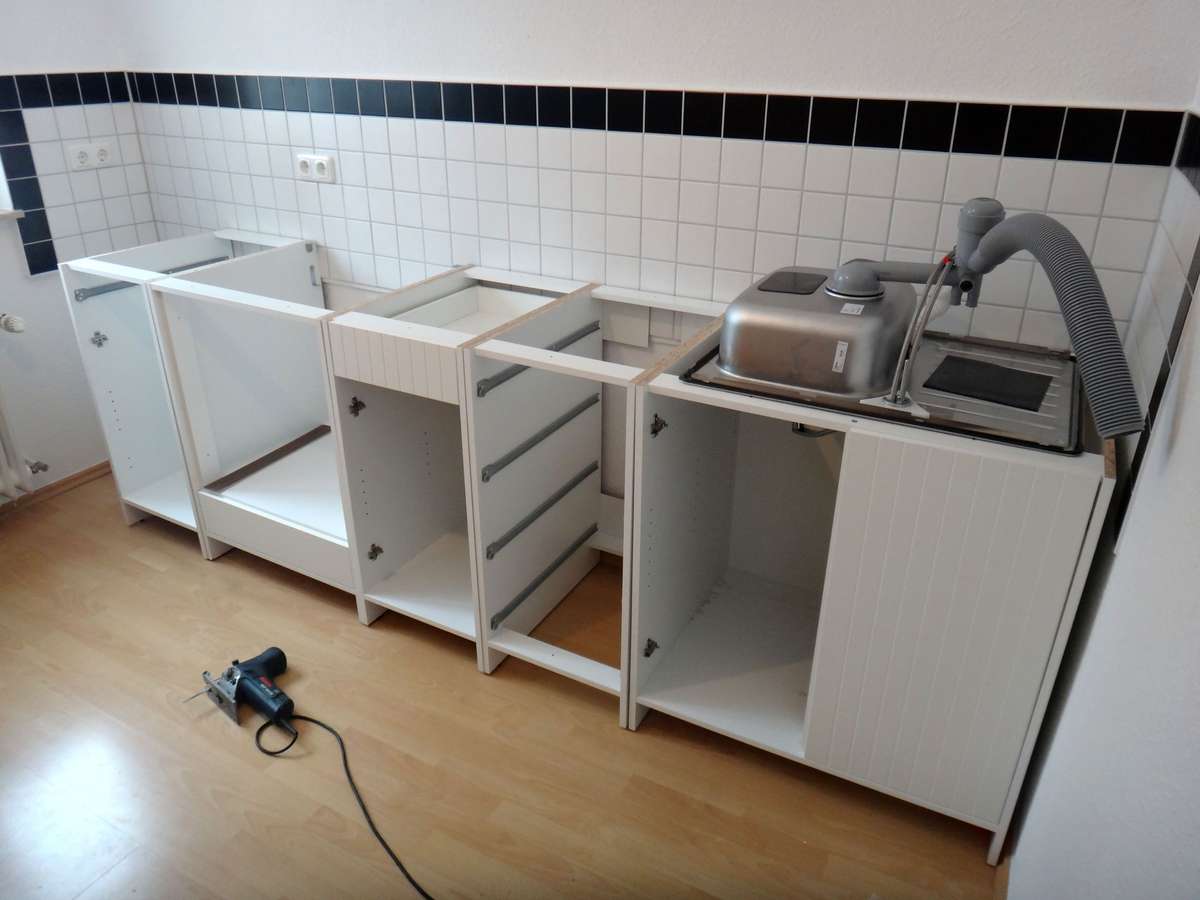 Building Our IKEA Kitchen in Germany

Expat Life in Germany
January 5, 2016 2
*This site contains affiliate links. If you purchase through these links, we may receive a small commission at no extra cost to you.

Some days, the list of conveniences we took for granted while living in Oregon seems endless.  This includes big things like moving into an apartment with a fully functioning kitchen and having the freedom to do whatever we wanted at our house – loud parties ’til the wee hours (it’s commonplace in Germany to have “quiet hours” from 10 pm to 7 am and on Sunday afternoon) and backyard bbqs with friends (open flames are restricted here which means no char-grilled burgers).

But this extends to little things as well, like something as simple as having a complete toolbox – the right tool for the right job.  Though Travis bought a few tools when we arrived in Switzerland, we no longer have every type of screw or nail known to man.  We sold or gave away most of that stuff when we left the States, even my beloved handheld sander for refinishing furniture.  When it came time for us to build our entire German Einbauküche (fitted kitchen), the tools he bought in Switzerland were still at our old flat in Onnens.

The good news, and clearly one of IKEA’s selling points, is that their furniture is simple, modular, and easy to assemble.

It’s so easy, in fact, that we only needed to buy a single tool – a compact little screwdriver & hammer combo.  With the bits for the screwdriver stored neatly in the handle and a flip-top hammer, it wasn’t a bad deal for just over 10 bucks.

On the other hand, I realized before I’d even finished building the first cabinet that the swivel hammer had a dangerous propensity to collapse back into closed position during the process of pounding.  Not ideal.

It would at least be sufficient for assembling our soft, particle board IKEA cabinets with their convenient, pre-drilled holes.

While Travis was at work, I sifted through the mound of heavy boxes stacked in our entryway, choosing a single wall cabinet for my first solo project.

Typically I lack the patience to even crack open how-to manuals, usually preferring to stick them immediately in a drawer somewhere or toss them directly in the recycling pile (much to Trav’s chagrin).  The IKEA sales associate had assured us the directions were quite helpful with easy step-by-step diagrams instead of the usual technical mumbo jumbo.  Feeling a bit doubtful, I skimmed through the first 15 pages highlighting a single safety warning in more than 20 languages:

Don’t climb on the cabinets.  Falls can cause crushing injuries.

After the ream of dire multilingual warnings, the actual assembly instructions were refreshing: easy-to-follow, detailed diagrams.  Laying out all the hardware for the first cabinet, I dove in enthusiastically.  I love building projects!  In less than half and hour, I had a completed kitchen cabinet, minus the cabinet knobs.

When Travis got home from work late in the evening, we tackled several more boxes together.  Working as a team, we set up an assembly line process, divvying up tasks we could each do while trying to share our single precious screwdriver/hammer tool.  In one evening, we were able to build the framework for the oven and stove top, the kitchen sink, and a couple more cabinets, saving any loud pounding for the following morning – in reverence of “quiet hours” and all.

The following morning, we met briefly with Mr. Beckmann and his friend, a contractor, at our flat.  Our hope was that the contractor would be able to do everything we couldn’t to finish installing our kitchen once we’d built all the cabinets.  One company told us they would have to sub-contract the plumbing for the sink and electrical work because of the particular requirements of connecting an oven here.  Several other companies we contacted were booked out for weeks, and most gave us estimates ranging from €350-500.  We especially hoped the contractor would give us an estimate that wouldn’t drive us into the poorhouse.

Acting as our interpreter, Mr. Beckmann told his friend where we wanted each cabinet and appliance along the wall, along with our dimensions and specifications.  He explained what we needed – for him to cut our two huge wooden counter tops to length, cut holes for the sink and stove top,  cut a hole in the sink for the faucet, complete the plumbing installation, remove the plaster wall plug to hook up the oven, hang the cabinets, and install the oven hood.

Without hesitation, the contractor confidently assured us he could do everything we were asking, that it would take less than a full day’s work, and then offered to get started immediately.  We were stunned!  We hadn’t even finished building all of the cabinets yet.  Arranging to have him come back later in the afternoon, our living room quickly resembled the Santa’s Workshop of Einbauküchen as we fell upon the rest of the cabinets with a vengeance, determined to have them completed by 1 pm.

Returning a bit early, our contractor immediately began measuring, sawing, and drilling, a blur of motion as we finished the last of the cabinets.  Realizing that the noise must be terrifying for our kitty, it was Travis who finally found Tica cowering behind the fridge.  Her golden eyes were wide in terror, perfectly spherical like 50 cent euro coins.  Just a few feet away from the deafening racket, she was trapped in the corner of the kitchen, unable to get to the door without exposing herself to the strange man with the giant, jack-hammer drill.  Easing her out, we made her a cozy nest in the quietest bedroom, where she didn’t budge until long after the racket ceased.

As the work progressed, at times we weren’t entirely sure if the contractor completely understood what we wanted.  We couldn’t simply ask him because of the language barrier.  Hovering outside the kitchen, we peaked in several times, concerned at one point that the kitchen sink unit was backwards with the basin against the wall.

Trying not to be helicopter parents babying our new sink, Travis finally interrupted, using hand gestures to indicate we wanted the sink to go the opposite way.  Considering the chaos involved in something as complicated as a kitchen installation, the contractor might well have set the sink down haphazardly just to grab a tool.  Either way, he installed it just as we wanted.

By the time the contractor left at 6 pm, he’d completed the bulk of the installation.  Most importantly, our oven and touch-screen stove top were operational, as was the kitchen sink!  Thanking the contractor, I paid him, incredulous that he charged us less than €100.  Since we still had several things he didn’t have time to do – installing the charcoal filter in the oven hood, hanging the non-IKEA wooden cabinets on the adjacent wall, and drilling holes for our cabinet knobs – he offered to come back later in the week to finish.  Unfortunately, we would be unavailable out of town, but I tried my best to let him know we’d contact him again upon our return.

Throughout the process of building our IKEA kitchen, especially as each new cabinet went up and we watched it take shape, I realized how much fun we were having!  Despite the cuts and bruises, the stress and cost of parting out each piece, it was fun to design it ourselves.  Though we opted for the cheapest or second cheapest of most everything, we splurged on things like the solid wooden counter top (a gorgeous slab of birch), rustic farmhouse-style lined cabinet fronts, and old-fashioned cabinet pulls.  Don’t get me wrong.

I don’t ever want to have to install another Einbauküche in a German apartment.

But we’re looking forward to enjoying our custom designed kitchen for the next two or three years.