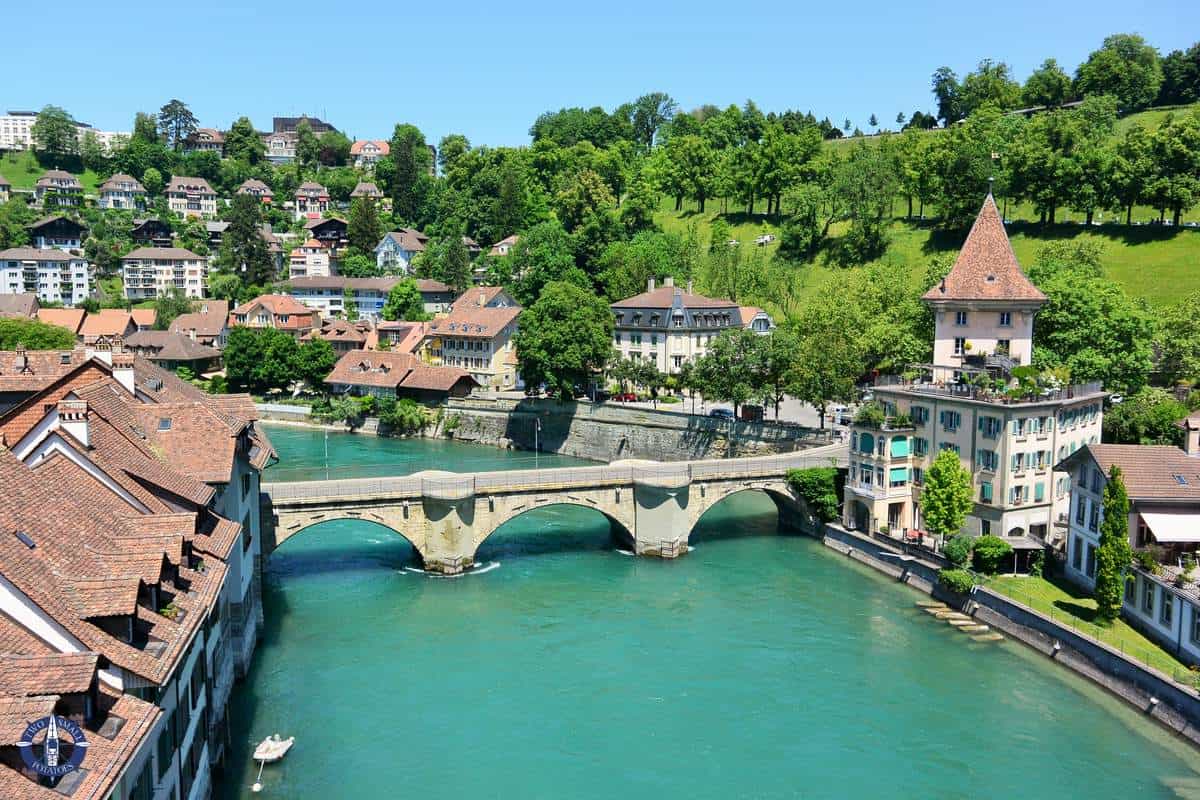 10 of the Best Things to Do in Bern, Switzerland

Switzerland
June 4, 2015 1
*This site contains affiliate links. If you purchase through these links, we may receive a small commission at no extra cost to you. 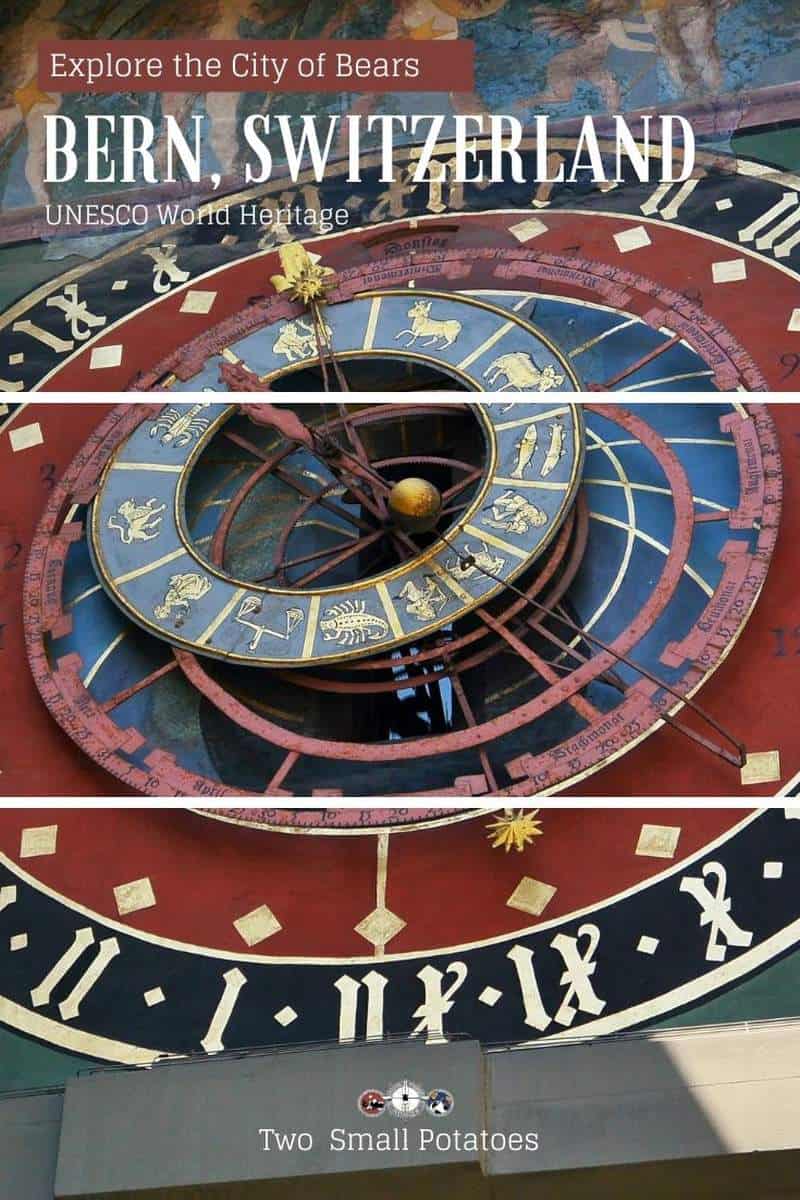 Recently Travis and I had the chance to explore Bern, Switzerland. This small capital city in Europe is home to about 430,000 in the greater metropolitan area, yet it very much has a small-town feel. It’s frequently listed among the top ten best cities in the world to live. If you have a chance to visit, don’t miss our short list of some of the best things to do in Bern – as shared with us from a local.

Planning a trip to Bern, Switzerland? Check out our quick travel guide for 10 of the city's best highlights. Click to Tweet

Our tour guide has been a resident of Bern for over 40 years!

Our tour guide for the day came as a complete and unexpected surprise to us. On weekdays, he’s a helpful Swiss Customs official and not a tour guide at all.

Nearly a year ago, we connected online when he answered an email inquiry about Swiss Customs fees. Since then he’s popped in occasionally to read a blog or two. We’ve continued to exchange emails, and he’s fielded other questions that in hindsight would more appropriately have been directed to other administrative offices.

Without fanfare, our knight in a button-down dress shirt has been helpful, informative, and unexpectedly funny for someone in his position.

Government employees are supposed to be grumpy and incompetent.

Through our exchanges, I found myself intrigued by this mysterious, witty gentleman who repeatedly answered my questions promptly, intermingling advanced Customs policy with poetic metaphors about ancient Athens.

When he offered to give us a personal tour of Bern, we jumped at the opportunity to have a local of 40+ years share the secrets of his city!

In the name of anonymity, we’ll just refer to our friendly Customs official as CG, for Customs Gentleman. The last thing he probably needs is every wayward expat flooding him with emails about things like the requirements for shipping alcohol to the US.

Leaving the car at home for the day, Travis and I took the train to Bern and met CG at the train station. We spotted each other immediately and made introductions. Without hesitation, CG set off at a spry walk with us perpetually half trotting to keep up.

Without further ado, here are ten of the best attractions in Bern, according to a local.

Almost immediately upon exiting the train station with its modernized glass arched covering, we arrived at the University of Bern.

Though much newer than schools such as the University of Basel, which was founded in the 15th century, it’s the third largest in Switzerland. With nearly 18,000 students, it has grown in popularity since it was founded in 1834.

In 1908, the esteemed Albert Einstein was drawn to the university to teach theoretical physics there.

As seems common for European universities that have expanded in areas with limited space, many of its buildings are non-centralized and consist of old buildings purchased and renovated in an economical way.

Several of the institutes at Bern University are even housed in the remains of an old chocolate factory.

Very near the train station, CG stopped to show us a plaque on the wall near the entrance to LOEB, Bern’s premier shopping district.

The plaque highlights notable groups of Swiss immigrants who settled in the United States. The total distance they traveled is included on the plaque.

Idaho (our home state) made it on a plaque in Switzerland!

The famous LOEB shopping district is owned by the 5th generation of the LOEB family.

With multi-level malls and an entire network of hole-in-the-wall stores accessed through cellar doors, it would take weeks to investigate all the little shops. Be on the look-out for the slanted street-level cellar doors that open into basement stores.

Stunned at some of the store-front prices, which are high even for Switzerland, we were content just to window shop. I can’t say that I really have any desire for a $20,000 necklace anyway.

Most of the really popular tourist Bern attractions are in Old Town, the city’s medieval center which has been a UNESCO World Heritage site since 1983.

Whether you have any desire to see specific sights or not, it’s worth it just to head to the heart of Old Town and explore. It’s impossible not to find it entirely enchanting.

If you do want to make sure you don’t miss all the best things to to in Bern’s Old Town, keep reading for our complete list.

Right in the heart of Old Town is Zytglogge Tower, a landmark medieval clock tower built in the early 1200s. It’s probably the most famous of all the Bern tourist attractions. It’s definitely the most photographed.

At one time, the tower was used as a women’s prison specifically for those who had committed sexual acts with clergymen. Talk about a specific prison for a very specific offense.

Did merely flirting with a priest warrant a visit to ye olde slammer?

In 1530, a large ornate astronomical clock was added to the Zytglogge Tower.

It now draws a large crowd of visitors every day when the clock strikes the hour and the mechanical figurines come alive.

Visitors who want a more intimate experience with the clock can pay for a public tour to climb up inside the tower and see inside the inner workings of the clock. You can find more info about public tours on the official Bern tourism site.

Over 100 public fountains are sprinkled throughout the city of Bern.

Of these, eleven are topped with 16th-century Renaissance statues that represent either historical or allegorical characters. A popular walking tour includes finding all eleven of these statues.

Ten of these are the work of a single artist, Hans Gieng of Fribourg.

Though we didn’t search for all of them, we found most of them. The Kindlifresserbrunnen is undoubtedly the most well known, and definitely the most disturbing. Known in English as the “Child Eater Fountain,” it shows a giant devouring a naked child with a bag of children at his feet.

Though theories abound, the exact meaning of the fountain is unclear.

Another fountain, the Zähringerbrunnen, was created in honor of the founder of Bern – Berchtold von Zähringer.

According to CG, a grand hunt was held while Zähringer was scouting out land for the city. Vowing that the new city would be named after the first animal killed during the hunt, an unlucky bear was slain and thereafter became the symbol of the city.

Bears are still widely displayed on flags, paintings, and statues throughout Bern.

Any Albert Einstein fans out there?

You won’t want to miss the Einstein Museum in town, which pays homage to the famous German-born physicist. The museum showcases old films, letters, and historical objects honoring his life.

Einstein moved to Bern, Switzerland in 1902 to work for the federal patent office. A year later, he moved to a house on Kramgasse 49 with his wife and young son. They remained there until 1905 while he wrote his famous Theory of Relativity. This would mark the most prolific period of discovery in his scientific career.

It has been lovingly refurbished with period furniture to reflect how it looked when Einstein’s family lived there.

CG briefly took us past the Bern Münster, or cathedral, encouraging us to come back later and climb the tower stairs for a superb view of the city. We definitely planned to do that, but first, he had other plans.

Because it was a weekday and CG had taken an extended lunch break for our tour, he had limited time left.

We continued on to a pair of old bridges over the incredibly blue River Aare snaking through town before doubling back to rest at a nearby cafe. Ordering drinks, CG recommended a panaché.

Travel Tip: Also called a shandy, panaché is light beer topped with a citrus soda like 7-Up and served on ice.

Our walking tour of Bern turned into the hottest day of the summer in Switzerland, so the drink tasted extra fabulous – light, fruity, and refreshing. It’s a wildly popular drink in Switzerland during the summer, so if you haven’t tried one before, consider ordering one!

After drinks, we thanked CG again and parted ways. He returned to his office, and we made our way to the Aare River.

Outdoor lovers, photographers, and those visiting during the heat of summer will want to get up close and personal with the gorgeous blue-green Aare River.

If you hang out for any length of time, you’ll likely see locals floating down the river on assorted inflatables.

Head to the Nydegg Bridge where you’ll have fabulous views of Old Town’s neighboring bridges over the river. Plus you can access the river below via a shady set of stone steps.

Tired from the heat, we enjoyed brown-bag sandwiches with our feet in the deliciously cool water. The setting was so beautiful and peaceful, we ended up falling asleep under the cool trees to the sound of the rushing river.

By the time we woke up, we were ready to hike back up the hill for more adventures touring the cathedral.

Bern Minster is a Protestant Gothic church initially built in 1421 but not completed until 1893.

At 100 meters, it’s the tallest cathedral in Switzerland.

Inside, the Bern Minster is home to the country’s most valuable set of stained glass windows.

We walked around the perimeter, admiring what we could see of the statues and stained glass that wasn’t blocked by scaffolding and plastic drapery for remodeling.

If you’re up for it, make sure to pay the few euros to climb the tower steps. The narrow stone spiral staircase includes nearly 350 steps to the top – a circular walkway above the bell tower.

CG was absolutely right in that the tower offers superb views over Bern with a 360 panorama.

We stayed for quite some time talking to the informative employee at the top and admiring the views. I loved the endless rows of brownish red rooftops, compactly squished so close together that the streets in between are nearly invisible.

As the evening crept in, we hiked the short distance to the main train station for our 30-minute ride back to Fribourg. Still warm late in the evening when we arrived home, we cracked a bottle of chilled Swiss wine we were unable to ship to our friends and toasted them in their absence.

We still can’t believe our good fortune in connecting with CG and in his generous offer to personally introduce us to his city. Thanks to him, we had a unique, intimate experience exploring a handful of the best things to do in Bern.

If you’re anything like us, you’ll also have a lot of fun exploring Bern – Switzerland’s “City of Bears.”

Looking for more unforgettable things to do in Switzerland?

Take a minute to PIN it!
16 shares