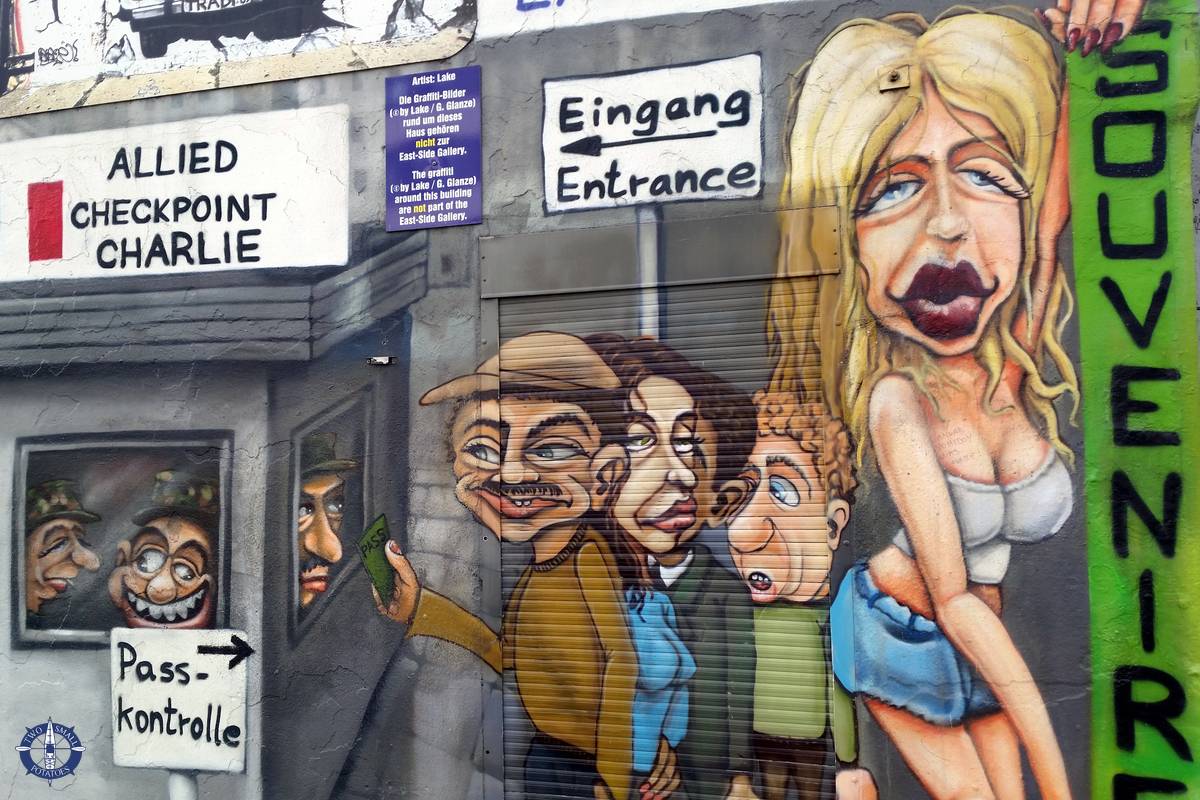 A couple of weeks ago, my friends Rana and Dorota proposed our first road trip together to Poland by way of Frankfurt and Berlin.  Both of them are spontaneous, flexible, and have an insatiable love of traveling, so I was excited to not only go on a girls’ trip, but finally see more of Europe!  Unfortunately, Travis had to stay home to work, so Touille stayed to keep him company.

Rana made arrangements for us to stay with a friend of hers in Frankfurt our first night, and Dorota lined up a place to stay in Berlin the following night.  After that, we planned to continue on to Poland to stay with Dorota’s family for a few days. Besides tentative sleeping arrangements, we didn’t have much of an itinerary, so when Dorota came down with a nasty bug right before the trip, we delayed leaving Fribourg for a day to give her a chance to rest. Unfortunately, it meant we weren’t able to spend a night in Frankfurt with Rana’s friends, but it was nice that we could simply delay leaving Fribourg for a day without having to worry about changing reservations or rescheduling bookings.

Though Dorota clearly still was not feeling well the day we left, she insisted we not cancel our trip.  I admired her stubborn willingness to spend 9 hours in the car driving straight through from Fribourg to Berlin.  Of course, our 1000+ kilometer journey was also more exciting because it was my first time driving on the Autobahn.

Arriving in Berlin shortly before midnight, we chatted with Dorota’s friends for a couple of hours and hungrily devoured bowls of superb homemade duck and buckwheat soup that they heated for us. Exhausted, we finally rolled up in our sleeping bags on their living room couches and crashed.  Up again a few hours later, we thanked her friends and zipped on over to the Berlin Airport to pick up Rana before 8 am.

With Dorota navigating and me driving, we found ourselves at the airport right on time – unheard of for me – but with no idea where to meet Rana.

Why are airports so blasted confusing?

While I made a pass at the upper level, Dorota called Rana to figure out where she was.  I felt like we were in a Three Stooges scene as I wove back and forth across lanes, the German traffic signs hopelessly lost on me, and finally looped back around to take another pass at the Arrivals.  Taking the wrong turn and again ending up on the upper level, we rounded the corner and saw Rana, waving her arms directly ahead of us.  We stopped right in traffic just long enough for her to jump into the back seat!  It could not have worked out more beautifully if we’d synchronized our finely tuned Swiss watches.

In short order, we spotted a sign with a giant “U” indicating an underground station for the city’s U-Bahn subway system.  All-day passes only cost €6.90.  Rana and Dorota somehow made sense of the complicated schedule which read like hieroglyphics to me, and after a confusing series of brief train rides, we stepped off into the very heart of Berlin.

For months, I’d heard Rana rave about Berlin – about its art, its energy, that she can’t get enough of the city.  That morning, I wasn’t feelin’ it.  I was unimpressed by the seemingly endless multi-lane roads flanked by grey concrete walls we followed forever within the city boundaries.  I didn’t like the cold architecture of solid rows of towering apartment complexes, unbroken by gardens or trees or anything to arrest the monotony.  And when we stepped out of the car park, all I could see was grey, grey, and more grey, made worse by the grey, cloudy skies.  But Rana’s enthusiasm was infectious, and she proceeded to lead us on a tour that allowed glimpses of the vibrant thrum of energy and creativity seething just below the surface of this gritty city.

Walking along the Oranienstraße,  I realized that in many places, the unbroken stream of graffiti was masking the crumbling facade of a brick wall or rotting wood underneath.   We briefly stopped for breakfast at Pfeiffers, where I thoroughly enjoyed a blissfully large caffè mocca and croissant. Exiting the café, I took a closer look at the graffiti and slowly realized that mixed in with the mundane tagging and everyday proclamations of love were some truly unique expressions of art.  Clever doodles, colorful cartoons, and a plethora of political statements were sprayed in different languages.  Some I understood, some I didn’t, but the more I looked, the more I wanted to see.  Every gate, door, and wall had something to say.  The city is a giant outdoor art museum.  My heart began to warm toward Berlin.

Another brief hop on the U-Bahn took us right to the famous Oberbaum Bridge, which spans the Spree River.  The lower level of the double-deck bridge carries car traffic while the upper section allows for passage of a U-Bahn train line.   The bridge stands as a symbolic pathway between two neighborhoods once separated by the Berlin Wall.

Just past the northwest corner of the bridge is one end of the East Side Gallery, the longest remaining section of the Berlin Wall.  The site spans 1.3 kilometers and exists as the largest open-air museum in the world.   In 1990 after the official demolition had begun on much of the Wall, artists were commissioned to paint 105 panels along this stretch, which remains as a memorial to freedom and a reminder of a dark period in the city’s history.

We wandered along the Wall, admiring the commissioned art panels, which at times are partially obscured behind a healthy accumulation of graffiti.  I felt sympathy for the artists who painted the original pieces and cringed a bit at the disrespect evidenced in such tagging. Yet I couldn’t help but appreciate it also for the freedom it represents.  Right up until 1989, a person could be shot just for approaching the Russian-controlled eastern side of the Wall.

While passing through the train station to catch another train, we found a Dunkin’ Donuts and couldn’t resist the sweet, sweet temptation.  Mama finally had a chance to get her sweet on!

My two tour guides next led me to the Memorial to the Murdered Jews of Europe, a vast field of nearly 3000 grey concrete slabs arranged in concise rows on a pitched slope with a sunken center. An underground building beneath the memorial houses the names of all known Jewish victims of the Holocaust.  We rested for a bit near the monument and though it was a bright, sunny day, the design of the memorial was less welcoming than a cemetery, which to me, it distinctly resembles.  Dorota pointed out that she felt this was appropriate, considering what it symbolizes.

Dorota explained that the slabs were sprayed with a special coating to protect against graffiti, a necessary precaution considering that the site has been repeatedly vandalized with images of swastikas. She also touched on some of the controversy surrounding the memorial.  A German chemical company, Degussa, was hired to provide the anti-graffiti coating for the concrete.  Members of the Jewish community demanded that the contract be granted to a different company after a Swiss newspaper posted several articles connecting Degussa with one of its subsidiaries, Degesch, which supplied the Zyklon B gas used in gas chambers during World War II. Because the company had already provided services for the foundation which would costs millions to replace, the contract was honored and Degussa completed the work.

Overall, the abstract austerity of the memorial left me feeling emotionless and conflicted.  Though the coldness of the memorial clearly is intentional, it fails to humanize the staggering loss of Jewish life, in my opinion.

These feelings were still with me when we arrived a block or two later at the Brandenburg Gate, one of Berlin’s most renowned landmarks dating from the 1700s.  Described to me by another friend in Switzerland, Oriane, I was excited to see the massive historical site she had recommended.  The gate witnessed Napoleon’s victorious procession in 1806, hosted a parade in celebration of Hitler’s rise to power in 1933, survived bombings during World War II, served as one of the checkpoints of the Berlin Wall, and has heard countless speeches calling for and celebrating freedom.

Practically across the street from the Brandenburg Gate is the Reichstag, which houses Germany’s parliament.

The last historical site we visited, and the most impactful for me, was the Memorial to the Sinti and Roma, not for any personal significance but for the sheer power of its design.  At the center of the dark pool is a triangular stone, much like the badges worn by prisoners in Nazi concentration camps.  A fresh flower is placed on the stone each day.  Santino Spinelli’s poem, Auschwitz, that’s faintly visible beneath the surface of the water around the perimeter, is enough to give any visitor chills.

As night began to fall, I realized we would have to make our way back to the car soon to continue our journey.  We still had a 3-4 hour drive ahead of us before we made it to our next destination, Dorota’s mom’s house in Pruszowice, Poland.

Rana led us off a narrow side street through an even narrower doorway into one more hidden art enclave.  We poked around for a bit, admiring the quirky outdoor light fixtures, colorful cafés, and a giant wall painting of a monkey taking our photo.  I stood staring up at the chimp’s oddly creepy grin and realized I didn’t want to leave. In the space of a single day, I had fallen in love – just a little bit – with Berlin.

Type to search or hit ESC to close
See all results
wpDiscuz
2
0
Don't forget to leave a comment!x
()
x
| Reply
We use cookies to ensure that we give you the best experience on our website. If you continue to use this site we will assume that you are happy with it.Got it!