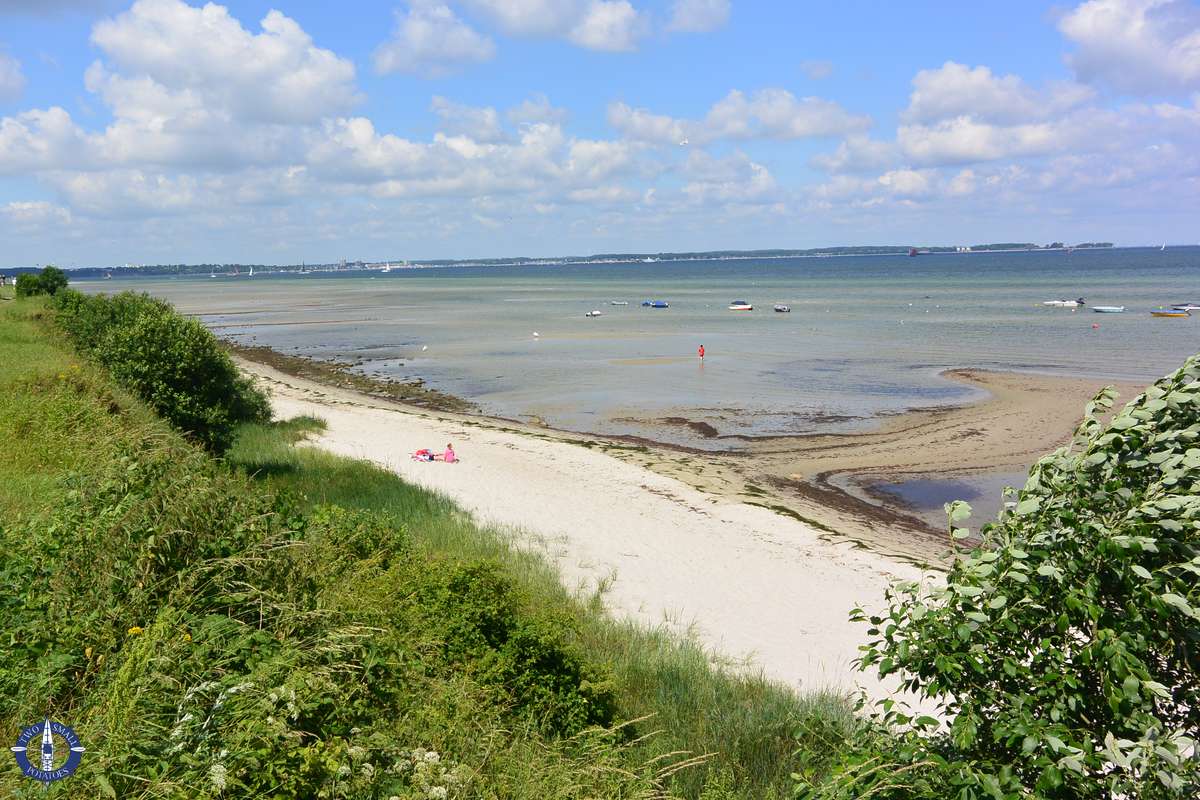 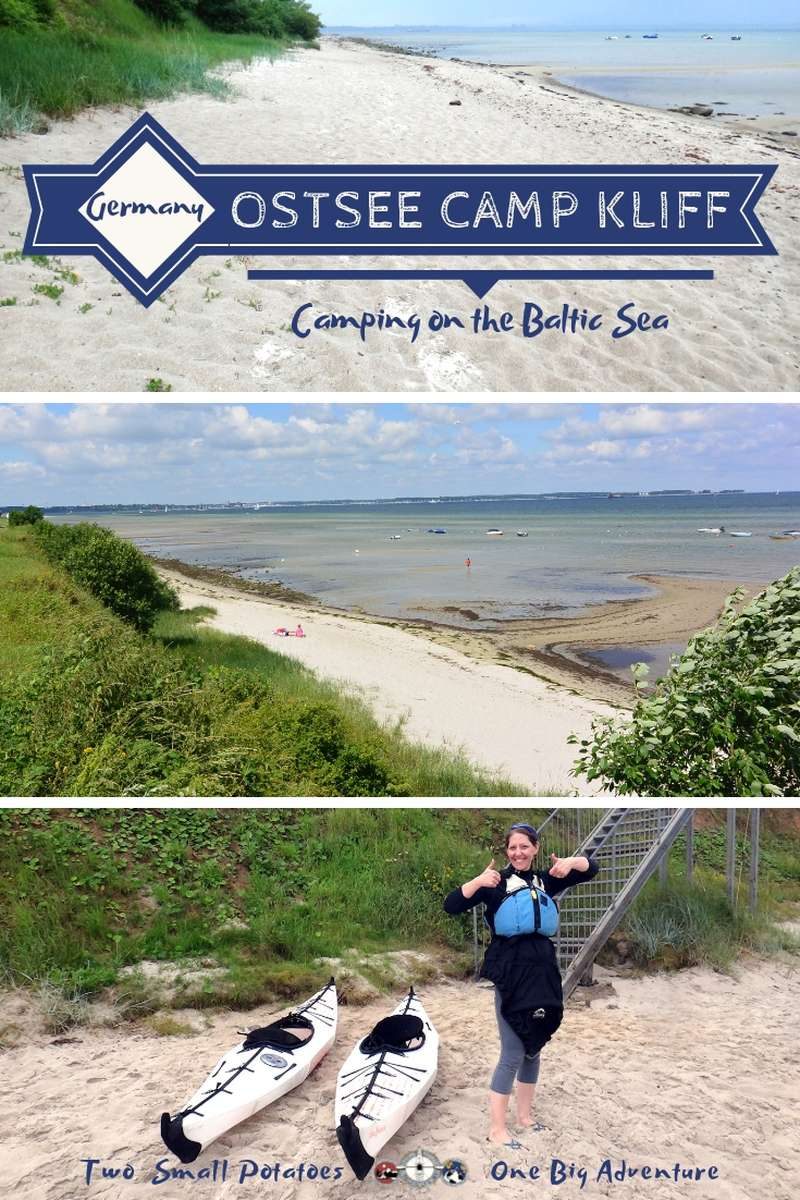 Have you ever wondered what it’s like camping in Germany?  Or are you planning your own camping trip and want to know what to expect?  After an inordinate amount of effort on our part, we can now answer that.  We finally camped in Germany in a straight-up legit campground called Ostsee-Camp Kliff on the Baltic Sea.  It was a very difference experience than our first camping experience in Germany.

Was camping at Ostsee-Camp Kliff everything we’d hoped for?  Yes and no.

We’ve long since realized that camping is very different in Western Europe than what we’ve experienced in the US, Canada, and Latin America.  In particular, campgrounds in Germany are not exempt from the same seemingly arbitrary rules that shape everyday life.

With that in mind, we planned well in advance in anticipation of spending a long weekend on the Baltic Sea.  Since our trip coincided with the last few days of Kieler Woche (Kiel Week) – the largest international sailing festival in the world – the pickin’s were slim for lodging, including campgrounds.  When we found an opening at Ostsee-Camp Kliff Ellernbrook up the coast from Kiel, I snapped it up.

Nearly two months after booking the campground, our camping trip finally rolled around.  With a long weekend ahead of us, we packed up the car and headed out of town on a Friday afternoon.  Four hours of driving and one hour of sitting in Autobahn traffic later, we arrived to gloomy weather in Kiel.

I didn’t care.  I was too excited about our impending reunion with the ocean!  We’d been away far too long.  Not since I was a kid living in landlocked North Idaho had I lived for so long deprived of the hypnotic throb of tidal waves against sandy shores.  How did these Two Small Potatoes end up living so far from the ocean?!

In Kiel, we veered slightly east, curving north to parallel Kieler Fjord, a long, narrow bay stretching into Germany’s landmass like a forked tongue from the Baltic.  Our road turned into a pretty country highway.  The damp air thickened with the sharp tang of the sea.

After checking in at Ostsee-Camp Kliff Ellernbrook, our home for the next 3 days, we pitched our tent next to a tractor.  In honor of my Birthday Month, Travis fixed us a couple of tasty Long Island Iced Teas, and we headed straight for the beach.

Burying our toes in the cool, soft sand, we waded out into the shallow waters, watching fish dart away and jellyfish drift along in the waves.  Don’t let that first sunny beach picture fool you.  We didn’t actually truly see the sun until Sunday morning.  The rain started almost as soon as we arrived and continued with varied ferocity for the next day and a half.  The weather was warm, though, and the sea was even warmer, so we spent the better part of Friday night exploring the beach in the rain.

We slept in late on Saturday morning, burrowing into our toasty down sleeping bags as the rain continued its soft patter on our tent.

Hunger and a need for coffee finally drove us both awake.  Grabbing up our Family Fun Blanket, a blanket with fleece on one side and waterproof backing on the other, we walked across the campground to a bluff overlooking the sea.  Staking out a nice vantage, we settled in to wait for the Windjammer Parade.

One of the final events of Kiel Week, the parade is made up of hundreds of sailboats in all shapes and sizes that sail from Kiel, through the Kiel Fjord, and out into the sea.  During Kiel Week, over 3 million visitors descend on Kiel, a town of about 250,000 inhabitants.  The Windjammer Parade is one of the more popular events.

Unfortunately, though our camp host had assured us that we’d have a wonderful view of the parade from the campground, we really didn’t.  The boats were not only too far out at sea to be very visible from our beach, but the weather was even more of a hindrance.  Intermittent rain and thick banks of mist mostly swallowed the steady parade of ships as they sailed past.

Throughout the Windjammer Parade, flashes of lightning occasionally lit the skies and thunder rolled in an ominous series of echoes across the bay.

We had planned to head into town when it was over to scope out the booths and live music set up for Kiel Week, but both of us really just wanted to paddle.  Leery of the weather, we grabbed some lunch at our tent while waiting to see if the storm would blow off.  Instead, it picked up intensity with the rain coming down in sheets.

Unable to resist the tempting curling white surf kicked up by the storm surge, we pulled on our kayaking gear and hit the water.

Wishing yet again that we had a GoPro, I hung our aging waterproof Sony vertically from my PFD to get a short video of us paddling.

When a wave hit me full-on in the chest, I grabbed for the camera fearing the worst.  It’s long had a large crack in the frame and probably isn’t really waterproof anymore.

Just as I reached for it, a blinding flash went off.  Assuming I must have actually had it on the photo setting, I was impressed that the wave snapped a photo for me!  Travis saw the flash and thought I’d perfectly timed a photo of us powering through the big wave.  Seconds later – when a cataclysmic crash of thunder hit – we both realized the light we’d seen was lightning, not our dinky little Sony.  The boom was impressive enough to send us paddling at a healthy clip inland, back down the beach to our campground.

After a hot shower and homemade dinner of mac salad and cheddar baked chicken, it was lights out for the night.

For anyone planning a trip to the Baltic, this campground might be ideal if you prefer RV camping and/or all the bells and whistles when you’re camping: hot showers, flush toilets, etc.  The location is ideal if you just want to lounge on the beach and soak in the sun, assuming it makes an appearance.  Either way, it’s a beautiful place to relax and appreciate nature.  And we highly recommend Kiel Week and the Windjammer Parade!

Have you been to Kieler Woche?  Do you have a favorite place to stay or know about the perfect spot to watch the Windjammer Parade?  Let us know in the comments!