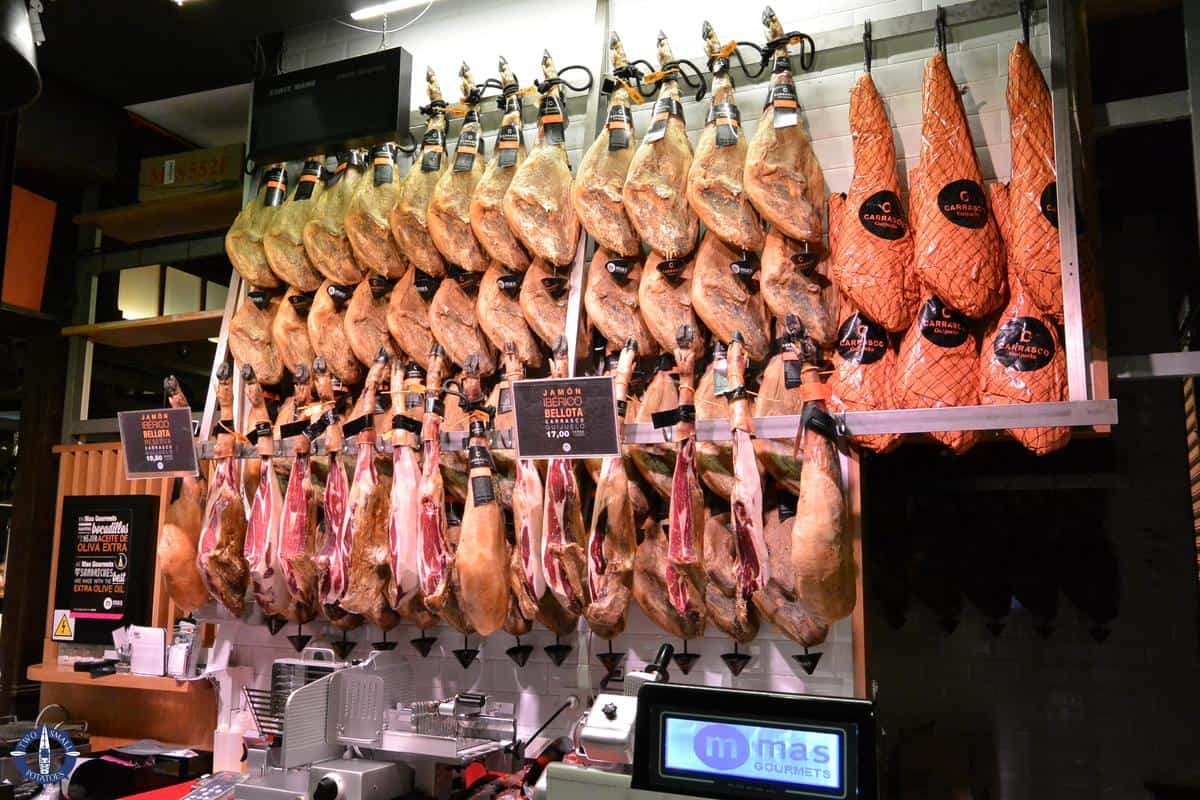 From the land of Swiss cows to the land of Spanish puerco, we arrived in Madrid on the evening of the third day of a two-week road trip from Switzerland.  We were meeting up with Alicia, a friend who grew up in the city, and would be staying with her at her parents’ home for the next few days.  She’d offered to personally escort us around for an insider’s scoop of her home town.  If you’re planning your own trip, keep reading for a list of some of the best things to do in Madrid as well as some useful tips.

We love, love, love Spain - the natural landscapes, vibrant culture, and welcoming people. Before you plan your trip, don't miss the best things to do in #Madrid, according to a local.Click to Tweet

If you happen to be driving to or in Madrid, it’s generally surprisingly easy to get around for such a large city.  That being said, the public transportation is inexpensive and easy to use, so we recommend leaving your car at your lodging once you arrive and just taking the bus or train.  Make sure you have a good map app too.  After inadvertently missing an exit on the Autopista M-30, we had to drive miles out of our way in the underground tunnel before we had an opportunity to exit and turn around.  From then on, we were easily able to navigate to Alicia’s parents’ house.

After dropping off our bags and meeting Alicia’s parents, she offered to take us out and get started on seeing the sites.  It was already early evening, but we were eager to explore.  For the rest of the evening and the entire next day, she led us on a whirlwind tour of Madrid.  This was followed by 2 additional days of side-trips to El Escorial and Segovia.  It really wasn’t until later that we realized what a great job she’d done showing us the best things to do in Madrid in a really short time.  The following is a list of the sites we visited, all of which we recommend.  We were able to visit them all in a day and a half, and they should be doable if you only have two days in Madrid.

One of Madrid’s most renowned museums is the Museo Nacional Centro de Arte Reina Sofia, often simply referred to as the “Reina Sofía.”

Primarily featuring Spanish artists, it has impressive collections from both Pablo Picasso and Salvador Dalí.  I’ve been a fan of Dalí since 1998 after visiting the Dalí Museum in Figueres where he lived his final days.  The museum is very well organized with a detailed map of which room features each artist.  This conveniently allows visitors to locate the art they most want to see and maximize their time at the museum.

Since Alicia knew the evening schedule for free entry, we breezed in without paying and headed for the Salvador Dalí room.  Check the link at the bottom of the article for museum opening hours and current discounts.

When the museum closed, we realized we were starving.  Alicia led us a few blocks to a little hole-in-the-wall place, Cervecería La Campana, where we filled up on deep-fried calamari sandwiches for just a couple bucks each.

Once your stomach is full, you’ll be grateful for a chance to walk off dinner and see more city sights.

Almudena Cathedral is the seat of the Catholic Archdiocese in Madrid.  It was originally intended to be a pantheon when construction was started in 1883.  Over the years, the original Gothic architectural style changed, and construction was halted during the Spanish Civil War.  The cathedral wasn’t officially completed until 1993.

The Royal Palace is historically the official home to the Spanish Royal Family, though it’s currently used for official functions only.  With over 3000 rooms, it’s the largest royal residence in Europe.  On Wednesdays and Sundays, visitors can observe the Changing the Guard ceremony.

The Royal Theater is an opera house in Madrid that has been in use since 1850.  Not far from the Royal Palace, it can seat about 1800 and is one of the greatest opera houses in Europe.

Packets of public transport tickets that're good for 10 rides are available for sale at many street kiosks in Madrid. Single trip tickets can be purchased on the bus.Click to Tweet

The Cervantes Monument is right at the center of the Plaza de España.  The monument rises above a long rectangular fountain, with the city of Madrid as a backdrop.

A simple stone statue of Cervantes, the Spanish author who wrote Don Quixote, looks down on larger-than-life bronze sculptures of his book characters, Don Quixote and Sancho Panza.

The most unexpected surprise and one of my favorite attraction of the entire trip was the Cerralbo Museum, home to the personal collections of Enrique de Aguilera y Gamboa, the Marquis of Cerralbo.  The site of the museum is the former home of the marquis, a Spanish archaeologist and insatiable collector of antiques who died in 1922.  Cerralbo offers a stunning variety of paintings, statues, clocks, lamps, and home furnishings that are absolutely packed into the lavish home.

Perhaps the most impressive collection is that of the lamps and light fixtures.  The museum is filled with fanciful and colorful chandeliers, many of them made of Murano, or Venetian, glass.

If you’re looking for a quirky museum that’s a bit off the beaten path in Madrid, we highly recommend the Cerralbo Museum.

Templo de Debod is a 2200-year-old Egyptian temple that originally was built near the Nile River. The temple was gifted to Spain in gratitude for their assistance in saving several important ruins from flooding after the construction of the Aswan High Dam in 1968.  The temple was taken apart and rebuilt, stone by stone, in the Plaza de Oeste overlooking the city of Madrid and the Almudena Cathedral.

9. “Pinchos” at La Máquina on the Gran Vía

If you’re hungry yet, head for the Gran Vía, Madrid’s premiere shopping street.  It’s packed with eateries, cafes, and restaurants.  For those in search of fabulous city views and traditional Spanish food, you might like La Máquina, a rooftop eatery overlooking the famous street and city skyline.

Madrid is known for their pinchos – little sandwiches similar to tapas.  Named for the skewer (pincho in Spanish) that typically holds the ingredients together, they come in individual servings.

We selected a variety for the three of us to share.  They were all delicious, from the ones with anchovies and another with a tasty truffle sauce to my favorite – tortilla española, a Spanish omelette with fried potatoes cooked in seasoned eggs.

Spanish food is so tasty!

10. The Bear & The Strawberry Tree

One of the most popular areas of Madrid is a plaza called Puerta del Sol.  In particular, visitors flock to see the 20-ton statue of El Oso y El Madroño (The Bear & the Strawberry Tree).  During medieval times, the area was home to vast forest of strawberry trees and bears that roamed the wilds.  The statue is the symbol of Madrid and represents its fertile land and aristocracy.

Even if you’re visiting in the off-season, expect to wait in line if you want a photo of yourself with the famous bear.

As you gradually work your way to the Museo del Prado, Madrid’s premier art museum, you’ll pass the Palacio de Cibeles, which used to be the old post office.  It even still says Correos on the building, though it now houses City Hall.

Making our way past the metal detectors to see the inside, we sat awhile on their comfy couches, used the free restroom (always a surprise bonus in Europe), and filled up our water bottle.  There’s not much to see or do inside, but don’t miss the stained glass panels in the building’s ceiling.

Another of the best things to do in Madrid is the Prado Museum.  It’s a popular attraction, so expect to stand in line for tickets or buy them online in advance.  The museum offers days and times with free entry, usually Sundays.  Check the link at the bottom of our article for the Prado Museum before you visit.

Take note that the museum has banned all photography and not just flash photography.

Neither Trav nor I have ever been a fan of old, dark, religious paintings.  We have little interest in scenes of the crucifixion of Jesus, chubby cherubs, and obscure religious figures.  Surprisingly, we both discovered quite a few paintings at El Prado that we really liked.  Particularly memorable were those by artists like Francisco Pradillo that date from the 19th century and reflect historical realism.

El Prado has the largest collection of Spanish paintings in the world.

Ironically, the museum was hosting a visiting Picasso exhibit from the Kuntsmuseum in Basel during our visit.  We wouldn’t drive the two hours from our house in Switzerland to see it in Basel, let alone all the way to Madrid.  I care not for Picasso, though I have to admit that his Guernica came to life with Alicia’s insightful running commentary.

Plan to spend at least a couple of hours at the Prado Museum - it's one of the best things to do in Madrid.Click to Tweet

When you leave the Prado Museum, outdoor lovers will enjoy a lovely evening walk through the Parque del Retiro.  The highlight?  The Crystal Palace.

At times, the palace hosts exhibits, but during our visit, the park was mostly empty.  We admired the glass and metal architecture of the palace from the outside, talked to the turtles in the pond for a spell, then continued on past the Plaza Maestro Villa with its beautiful statues and reflecting pool.

Right at the northwest corner of the Parque del Retiro is a giant roundabout with the monstrous Puerta de Alcalá at its center. Completed in 1778, the monument is graced by statues representing the four cardinal virtues: temperance, justice,  prudence, and courage.

It seemed fitting somehow that we should end our tour of Madrid at this particular piece of architecture.  Once the gate of kings, steeped in history and moral integrity, it was a final memorable symbol of our short time in a truly vibrant city.  Though we just barely scratched the surface, we left content at how much we were able to see in less than two days – on foot, much of it free, and with the expert guidance of a knowledgeable local.

Sharing is caring – take a minute to Pin It!

Know Before You Go
Map of Spain Road Trip

We spent the evening of day three and day four in Madrid.  The blue line roughly follows our entire 10-day travel path.

Type to search or hit ESC to close
See all results
wpDiscuz
2
0
Don't forget to leave a comment!x
()
x
| Reply
We use cookies to ensure that we give you the best experience on our website. If you continue to use this site we will assume that you are happy with it.Got it!