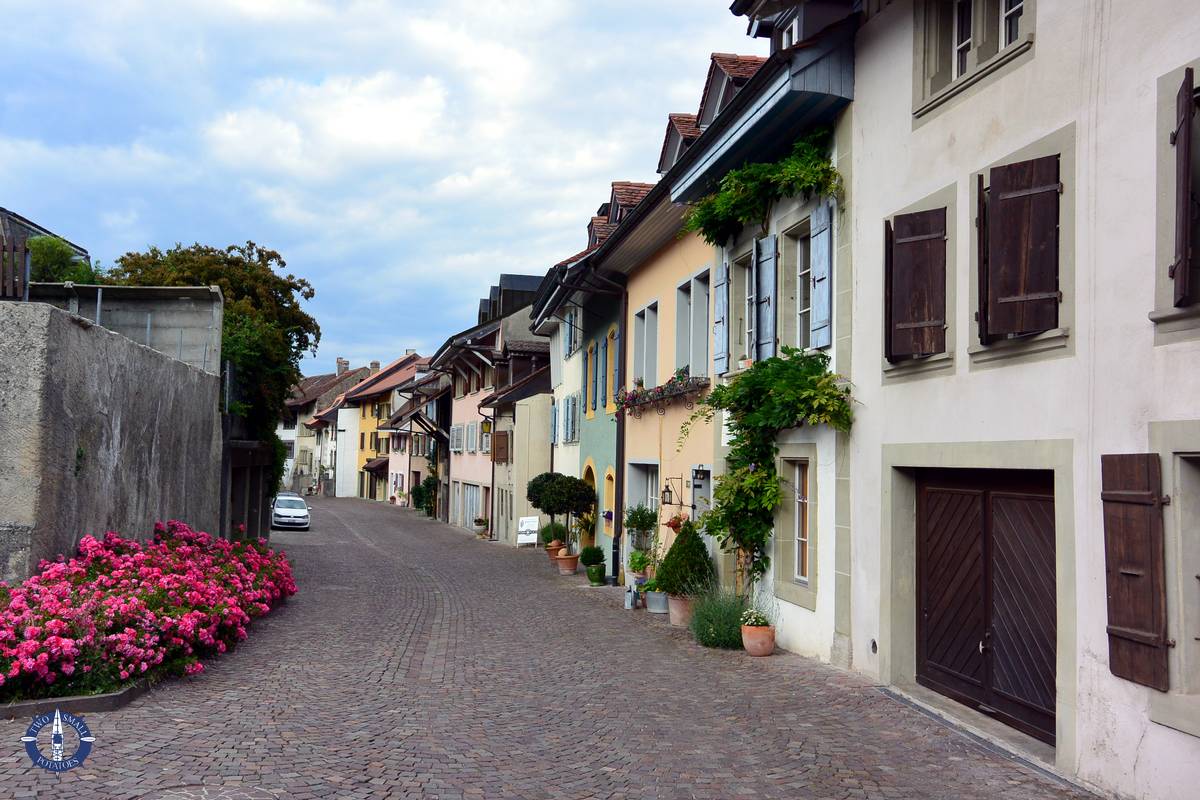 Explore the Best of Avenches, Switzerland 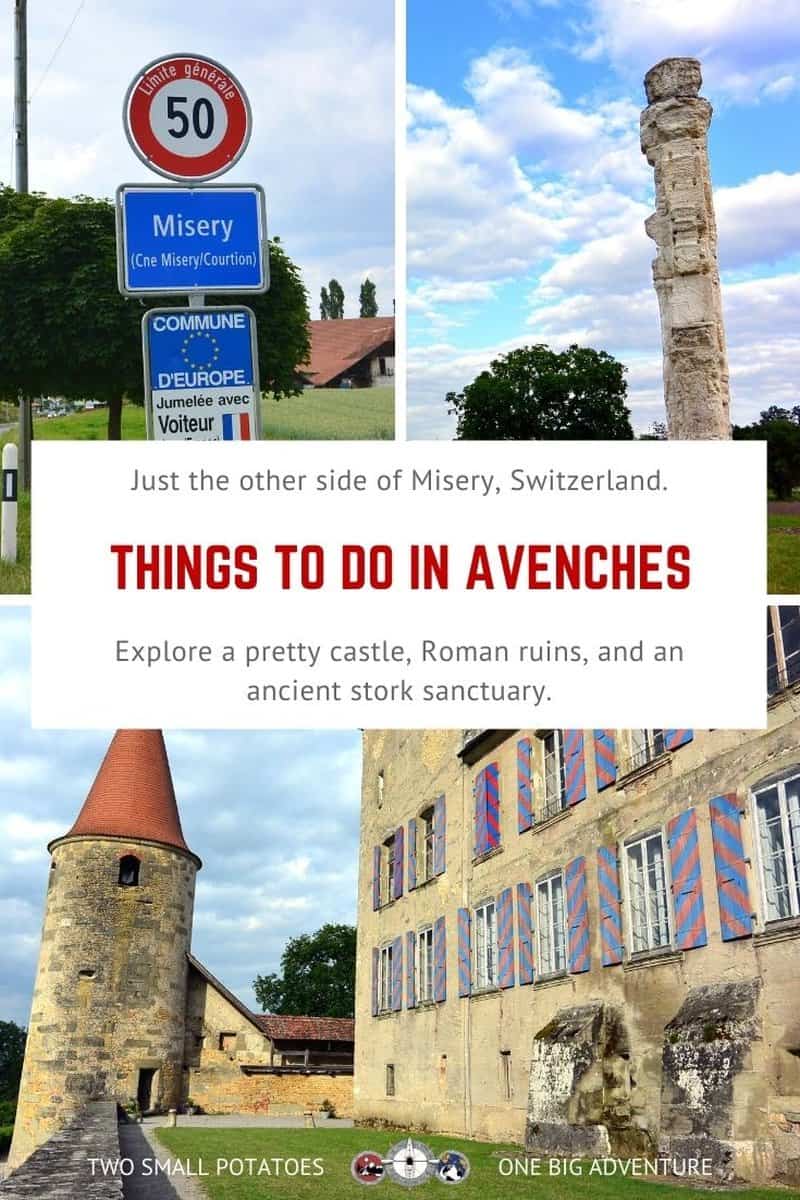 When yet another week of stellar, sunny weather gave way to rain, clouds, and lightning in the Alps, Travis and I again postponed our plans to go hiking and camping in the mountains. Instead, we opted to drive the 15 minutes or so to the little town of Avenches, the birthplace of Switzerland in the Lake Geneva region. It’s known locally for its Roman ruins, a pretty 13th century castle, and an ancient stork sanctuary.

But first, we’d have to be in Misery for awhile.

Not even awhile, really, considering that the little tiny farming community of Misery, Switzerland is so small you’re past it before you can blink.

The village of Misery is a one-horse town.

Consisting of a smattering of buildings, a single roundabout, and surrounded by a whole lot of farmland, Misery likely won’t hold your attention for long. We stopped only to take a photo and marvel at the town’s name before continuing on to Avenches.

Arriving in the late afternoon, we parked in the city center and set off with our dog, Touille, to check out town. Within minutes, we’d passed the beautiful old Reformed Church of St. Mary Magdalene along a fairly main street.

Turning and walking a single block over led to quiet old streets with neat rows of houses, all painted colorfully and displaying flower pots, hanging gardens, and the occasional impish garden gnome ready to moon the unsuspecting passersby.

Clearly, much of Switzerland is old, but Avenches is still special.

Referred to originally as Aventicum, the site was once inhabited by Helvetians – people of Gallic descent – before they were conquered by the Romans at the beginning of the 1st century BC.

One could argue that Avenches is the birthplace of Switzerland. The area was founded in the 1st century and flourished with prosperity for centuries. With over 20,000 residents, it was an important commercial site as both the ancient capital of the Helvetii people and for the Romans after they conquered the Helvetians.

Though the country is now commonly referred to as Switzerland, its official name is still the Latin Confoederatio Helvetica, and the abbreviation “CH” appears on license plates, postage stamps, and Swiss coins.

Travel Tip: Over 70% of residents in Avenches speak French. German is the second most common language spoken.

You really can’t go wrong exploring Avenches on your own, but you’re also welcome to use our map as a rough guide. It includes all the attractions we visited and mentioned in this post.

Nowadays, the population of Avenches is only about 4500. Its small size might lead one to mistakenly assume it’s just another small farming town. That is at least until you start exploring town, particularly the historic Old Town.

While wandering the charming and colorful cobblestone streets, one can’t miss the hulking stone landmark of Benneville Tower. The tower is one of two remaining towers that date from the 13th century and once formed part of the ancient fortifications for the city. It has since been incorporated into the walls of homes later built around it as the city grew.

Visitors can learn more about it – and the other attractions we visited in town – during a 1 1/2 hour guided tour through the Avenches Tourisme Office. Contact them to book a tour.

Chateau d’Avenches is a castle which was originally built in the 13th century. It’s unique eye-catching exterior was added in the 15th century. The facade is one of the most beautiful examples of Renaissance architecture in Switzerland.

At one time, Avenches Castle served as a prison, but now it’s home to an art gallery, a library, offices, and classrooms.

If you’re following our map, the next attraction you’ll see immediately after leaving the castle is the Avenches Amphitheater.

These are no Roman ruins though. As the best preserved Roman monument in the entire country, it looks like it was just built a few years ago. Yet it was built in the 2nd century AD!

With enough space to comfortably seat up to 15000 visitors, the venue has superb acoustics and is still regularly used to host concerts and events. It’s free to explore except when performances are being held. If you want to buy tickets, you can find a list of current events on the Avenches Tourism site.

We didn’t know anything about the amphitheater in advance though, so it was a big surprise when we stumbled across it! Rounding the corner of the castle, we were aimlessly wandering and enjoying the fresh summer breezes when the faint notes of an opera drifted to our ears on the wind. We followed the sound to the outdoor amphitheater.

The music we were hearing was a live rehearsal performed by members of Gioacchino Rossini’s famous Il Barbiere di Siviglia: The Barber of Seville. This year – 2015 – marks the 2000th anniversary of Avenches with multiple events lined up through the summer in celebration.

We sat for quite some time, enjoying the music, waving at the singers (who waved back), and laughing at the director dancing theatrically below the stage.

From our vantage at the top of the amphitheater, we had a nice view of our surroundings. We could see what appeared to be the tower of a church some distance away on a hill.

Striking out in that direction, we almost immediately reached the edge of town as the trail opened into a large field with multiple skinny columns dotting the grass.

This historical landmark is called Cigognier, which is French for “stork.” Records from as far back as 1642 use that name to refer to this place, where storks nest for part of the year. Or at least they did until 1978, when the nest was relocated to protect them while the area was undergoing restoration.

Long before the columns provided a cozy aerial abode for storks, they were support pillars in a Roman city.

Construction on the complex began in 98 AD in worship of Emperor Marcus Aurelius. The building materials, architectural style, and the layout of the complex suggest it was designed to imitate the luxury of imperial buildings in Rome.

Over the centuries, the settlement fell into ruin, leaving only a few columns standing – perfect for nesting storks. The columns are weathered by the elements, all traces of colorful paint and carvings lost. Except for one. On a single 12-meter limestone column, you can still see decorative sea dragons.

Yet another amphitheater, smaller than the first, is just a short distance from the stork sanctuary. Though it’s rather small, it’s completely open and free to explore and offers pretty views across the fields.

The last two attractions on our walking tour of Avenches include the East Gate and Tornallaz Tower. Both make up part of the exterior fortifications that surround Avenches.

In fact, we finally realized that it wasn’t a church we had seen up on the hill from the amphitheater; it was this tower and the remains of the East Gate.

We struck off uphill with Touille romping ahead of us on the trail, intent on chasing a nice stick Trav found.

Travel Tip: If you have a dog, bring them. They’ll love this walking tour!

We hadn’t gone far when we met another gal on the trail with her regal poodle.

Stopping briefly to let the dogs meet, we ended up chatting with her for well over an hour. She invited us to her place in the Valais, offering to take us hiking and show us some deserted places in the Alps to go camping, and we exchanged contact information.

People in Switzerland really are nice!

Back on the trail, we passed through beautiful blueish green wheat fields dotted with brilliant red poppies already shuttered for the night. We arrived at the East Gate as the sun was sliding into the Jura Mountains.

The gate was once one of four entrances leading to Avenches through the 5 km-long wall that encircled the town. The wall once topped out at seven meters and had 73 towers along the perimeter. Of these, only one remains standing just west of the East Gate: Tornallaz Tower.

When we arrived at Tornallaz Tower, we were surprised to find the tower door unlocked and open, allowing us to climb the multiple sets of spiral stairs to the wall and then on to the top of the tower itself.

We didn’t stay long. I realized after leaning against the cool rock wall that the structure was virtually covered in bees: large, aggressive bees. Instead of swarming near a hive or congregating together, they were instead spread out over every surface of the tower that we could see.

One particularly aggressive individual pursued us all the way back to the East Gate, hastening our departure.

We stayed a spell at the East Gate, watching the stars come out and the lights of Avenches start to twinkle in the distance.

A giant hare hippity hopped down the road, unaware of our presence, and we froze, hoping he’d hop closer. Ever the cautious little beast, he was suddenly gone in a puff of dust.

Hiking back through the fields in the dark, I appreciatively took deep breathes of the earthy night air on the way back to our car.

For most visitors to Switzerland, Avenches will never make their radar of interesting places worth visiting. They’ll opt for the opulence of cities like Zurich or head to the slopes of ski resorts like Zermatt and Verbier.

But for those with more time, an interest in Roman ruins in Switzerland, and a desire to connect with a place known mostly to locals, Avenches is an under-visited little treasure. It’s only 20 minutes by car from Fribourg, just the other side of Misery.