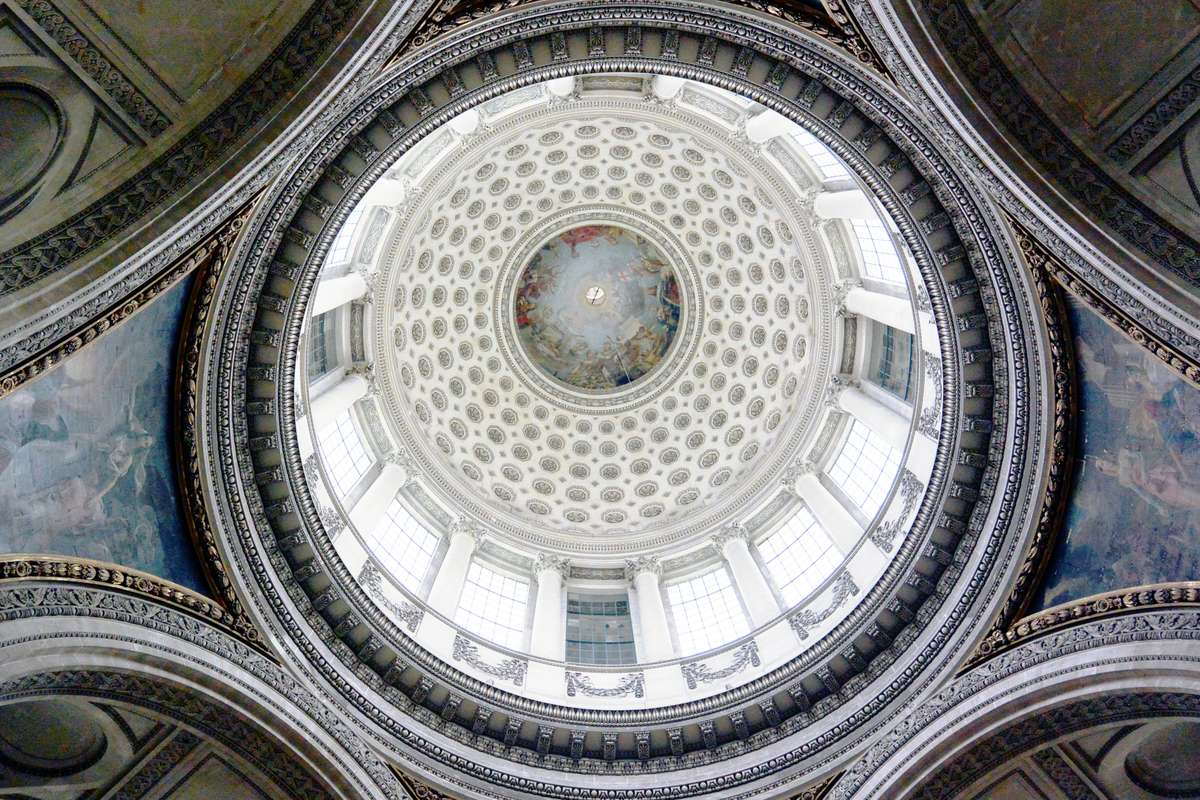 Anybody know who’s buried at the Pantheon? 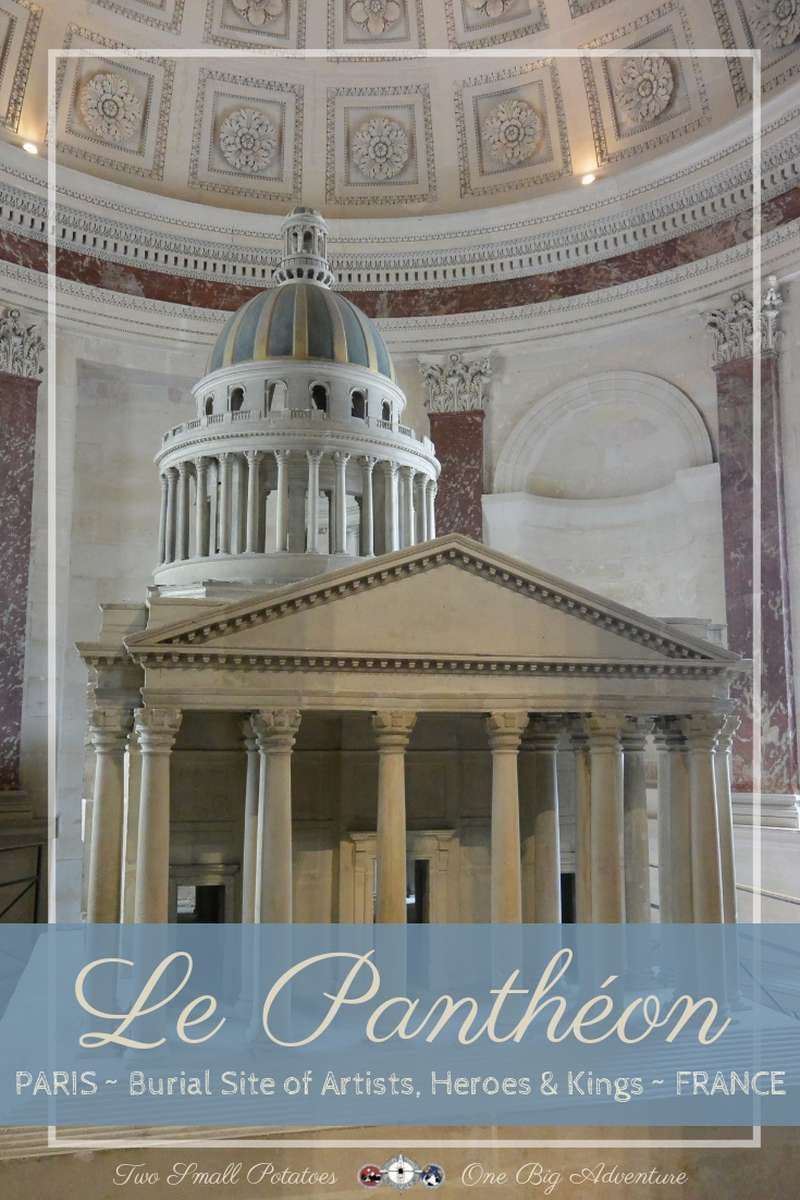 Everyone knows about Italy’s famous Pantheon in Rome, but not many people know about the Panthéon in Paris. It tends to be often overlooked by tourists who flock to the city’s more notorious sites – places like the Eiffel Tower, the Louvre Museum, and Notre Dame.  Yet the Pantheon was the first great monument in Paris, pre-dating these other significant landmarks.  Completed as a church in 1790, it now serves primarily as a mausoleum where the national heroes of France are interred with great honor.  For those interested in French literature and history, a trip to the City of Light isn’t complete without a visit to the Pantheon in Paris.

Patterned after the original, much older Pantheon in Rome, the Pantheon in Paris was originally called the Église Sainte-Geneviève; it was a church built to honor Genevieve, the patron saint of Paris. Though construction on the church began in 1758, the architect died before it could be completed and it was his protégé who saw the project to fruition in 1790.  Against the backdrop of the French Revolution, France’s newly formed National Assembly ordered the church to be converted to a mausoleum, laying to rest its first two prestigious members the following year.

The Pantheon in Paris is the final resting place for France's national heroes. Find out what to expect before your visit. Click to Tweet

Over the next century, the building twice reverted back to use for religious purposes before being officially declared a secular necropolis with the death of Victor Hugo in 1885.  A true literary genius, he wrote The Hunchback of Notre-Dame, Toilers of the Sea, and his most famous work, Les Misérables.  Professing a belief in God but no affinity for religion, Victor Hugo was interred in the Panthéon following a funeral procession of two million mourners.

One could almost think of the Panthéon as two separate attractions.  The first is the ground-level mausoleum with lavish paintings, ornate ceilings, and stunning statues.  The second is the crypt, which is located below ground and extends in a dizzying network of halls and rooms beneath the main building.  Both are absolutely worth exploring.

Expecting the interior of the mausoleum to be somber and dark, I wasn’t prepared for the grandeur of the paintings, arches, and statues.

It certainly feels like it was once a church.  Paintings larger than those in the Louvre cover nearly every wall, depicting scenes of famous battles in French history, the coronation of kings, and the death of martyrs and saints.

One statue that particularly stands out is La Vengeur.  It was created in 1908 by sculptor Ernest Dubois in honor of the French ship, La Vengeur du Peuple  (Avenger of the People), that was sunk in 1794.

In the midst of the French Revolution, La Vengeur was tasked with protecting a convoy transporting food sent from America.  Attacked by the British, the ship was cut off from her sister ships and valiantly attempted to defend herself as the fighting raged for hours.  With holes in her hull and her mast cut down by bullets, La Vengeur finally listed and sank, though many of her crew were gallantly saved by British sailors in what became known as the Glorious First of June.

Equally as stunning is a piece from 1913 by Alphonse-Camille Terroir called À Diderot et aux encyclopédistes – “To Diderot and the Encyclopedists.”  The piece remembers Diderot, the famous French philosopher and writer who contributed heavily to France’s Encyclopédie, one of the world’s first non-religious encyclopedias in the 18th century.  The female seated on the left represents Truth: the male on the right, Strength.

In the center of the Panthéon’s main dome, a large gold ball slowly swings back and forth above a dial.  Named after the French scientist Leon Foucault, this “Foucault pendulum” was originally installed in 1851 as an experiment to prove that the planet rotates on its axis.

Swaying from a 67-meter long cable attached to the ceiling of the main dome, the ball remains in a fixed plane of movement as it rotates 11° an hour clockwise around the dial, completing its circuit in 32.7 hours.  It’s pretty trippy.

The gold ball was redesigned in 1995 and is heavier than the original, now weighing in at 47 kg, but the piece itself remains largely unchanged from Foucault’s original.

Just as I was starting to think we’d never find the tombs buried beneath the Panthéon, we found a set of stairs leading us underground.  The air was cool in the quiet, echoing chambers of the crypt.  Without the main map at the entrance and smaller maps throughout, it’s unlikely we ever would have found a specific tomb in the complex maze of rooms.

Near the entrance, we found the tomb of Voltaire – writer, poet, and philosopher.  Since I’ve never read any of his works and Travis wasn’t particularly fond of Candide, we stayed for but a moment.

We were in search of someone far greater – my favorite author of all time, Victor Hugo.  We followed several sets of stairs, curved around spiraling corners, and then descended further into the crypt.

Where was my hero?   This unrivaled, inimitable French author par excellence?

Science lovers should take note that Marie Curie is interred buried in the crypt.  The first woman to win a Nobel Prize and the first female professor at the University of Paris, she was also the first woman to be laid to rest at the Panthéon based on her own achievements.  The one female buried there before her was laid to rest with her husband because of his notoriety.

At long last we reached the main room where we would find Victor Hugo’s tomb.

We were so close!

And this was it.  The moment.

I peaked my head into a long cylindrical room holding several tombs and finally was within touching distance of the greatest writer of all time.  I couldn’t believe folks were walking past without stopping – I had just assumed everyone visiting the Panthéon had come to see him.

Did they not know how amazing he was?!

Now, I’m not gonna lie here.  I was a bit disappointed.

Where were the photos, the flowers, the wreathes?  The paintings, autographed copies of his books on display, notes left by adoring fans?

Considering how he lived his life and on what he placed value, I shouldn’t have been surprised. Upon his death in 1885, his entire will consisted of five simple lines:

I leave 50,000 francs to the poor. I want to be buried in their hearse.
I refuse [funeral] orations of all churches. I beg a prayer to all souls.
I believe in God.

Victor Hugo was a simple man who believed in social justice and equality, not riches or notoriety.  For me, even though his tomb was rather un-extraordinary, I was happy to be able to pay my respects to someone whose literary legacy I’ve admired for so long.

Now if only his genius were spread by proximity….