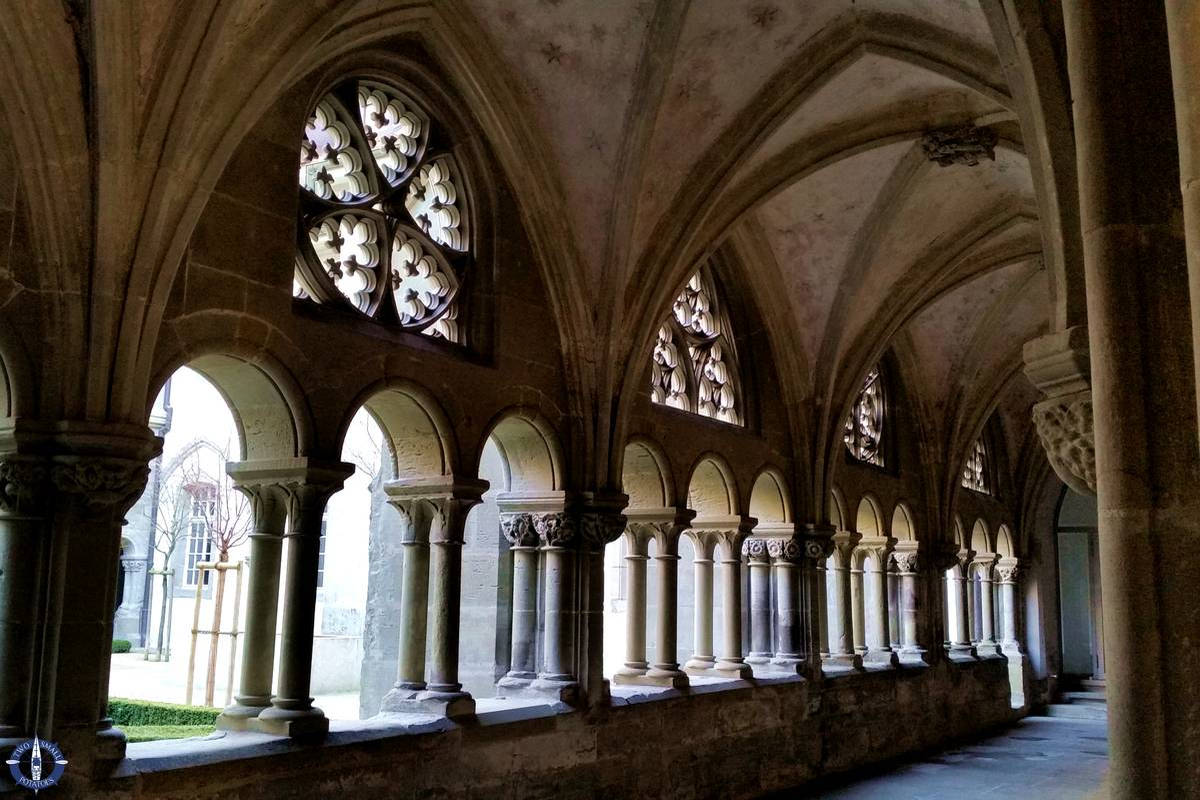 Switzerland
March 7, 2015 1
*This post may contain affiliate links. If you purchase through these links, we may receive a small commission at no extra cost to you. We only recommend companies we trust! 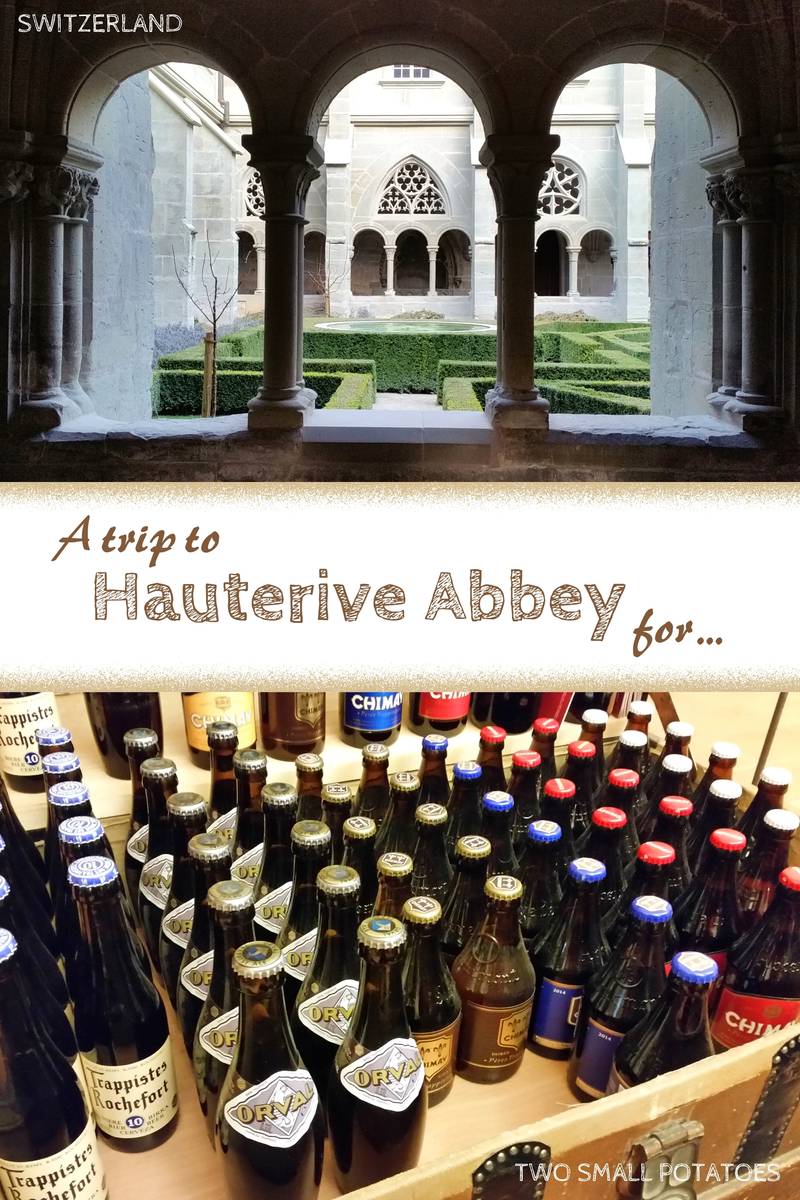 Most people who visit Hauterive Abbey in Switzerland probably do it for the solitude and beauty the ancient monastery offers. Or maybe to learn about its history. As the “oldest working Romanesque abbey,” it’s especially natural in this modern world to be drawn to a community where Cistercian monks still kneel to pray in a 12th-century medieval church.

While all of that definitely drew us to the place more than once, it wasn’t what we found most memorable. So what do we recommend you don’t miss while visiting Hauterive Abbey?

A peaceful stroll through the monastery grounds on a lovely spring day?

Guess again! Pretty much ALL of Switzerland is gorgeous.

Soggy kisses from the amorous bovine?

It’s a good thing the river is nearby to wash off the moo slime.

An afternoon of silent contemplation and reverent worship?

Perhaps Travis could pull off an afternoon of silent reverence, but anyone who’s met me knows I’m only quiet when I’m asleep.

Normally an excellent test taker, I can just imagine sitting down to the entrance exam for the nunnery, reading the single-sentence instructions to sit for 5 minutes without saying a word, and leaving a minute later with a giant red F scrawled across the top.

I don’t know what the requirements are for sainthood, but I’m pretty sure it requires performing a miracle, which certainly puts Travis squarely in the running. Anyone who can listen to me prattle away while they’re trying to read science journals, compose a single email, or just catch up on videos of kittens tussling on YouTube (he’s tough but he’s not made of stone, people) and still maintain their sanity has completed not one, but a continuous string of miracles.

So what were we really up to, visiting the abbey on this particular Sunday?

While it’s true that the setting is idyllic and the architecture is stunning, kudos to anyone who guessed that we were actually there for the divine nature of…

But not just any beer.

We had heard that the monks at Hauterive Abbey make and sell their own jams, breads, and spirits on site. We were keen to investigate their homemade beer for ourselves.

What can you buy in the shop at Hauterive Abbey?

As it turns out, they do – as others had told us – bake bread that’s available for purchase on weekends. It was the warm, yeasty smell of freshly baked bread that drew us toward the entryway of the sunken vault housing the abbey’s gift shop.

The shop is filled with a rich variety of artisanal grocery items, beautifully hand-carved wooden bowls, and stunning silver and gold jewelry.

It was their small display of craft beers lined out in a vintage chest that drew us though.

At first we were disappointed to realize none had actually been bottled at Hauterive, but our interest was piqued anew when we noted that they were from several Belgian Trappist breweries.

In the face of increasing liberalism of Cistercian monasteries in the 1600s, the abbot at La Trappe Monastery in France drafted a series of new, more austere rules for its members. In doing so, they created an order of monks that would become known as Trappists.

Though they take several vows, they’re probably best known for their commitment to “celibacy, fasting, manual labor, separation from the world and silence,” though evidence of these vows differs among monasteries.

Most of us, even those with strong religious convictions, likely read this and cringe.

I’ve already mentioned my inability to maintain silence. I won’t even get started on how much I like junk food, vegging out on the couch to watch a good movie, socializing with friends, and drinking to excess – among other things.

Even the US, which didn’t see their existence until the 19th century, has monasteries in 15 states, including the Guadalupe Abbey near Portland, Oregon.

What is uncommon, though, is Trappist beer.

Of the 169 Trappist monasteries worldwide, only 10 have breweries that meet the stringent requirements of the International Trappist Association, which allows them to officially classify their brew as “Trappist.”

Nine of these are in Europe, while the 10th – St Joseph’s Abbey, is in Massachusetts in the US.

Why do the strict ITA rules make Trappist beer so interesting?

The beer must be made within the walls of the monastery using water that’s typically drawn from wells or springs on the same land.

Brewing cannot in any way interfere with a monk’s primary duties of prayer and reflection.

All proceeds from product sales support the monastery and the rest is donated to charity.

This is pretty impressive when you consider that Chimay Brewery in Belgium grossed over $50 million in 2007. Not exactly chump change.

Breweries like Rochefort in Belgium have been brewing since 1595, so I suppose it shouldn’t be a surprise that they’ve pretty much figured out what tastes good by now.

Over the centuries, they even developed their recipes to perfectly complement the calcium-rich waters of the Tridaine, a stream near the monastery that’s the source of water for their beer.

After perusing the selection of beers, we chose 4 different bottles to sample later, including a Rochefort 10: a dark, rich beer with the flavor of caramel and fruit and an impressively high alcohol content of 11.3%.

We also bought a few things to add to our growing pile of gift items to eventually mail to friends and family in the States.

And of course, Travis handpicked a loaf of fresh bread that was still warm from the oven. We definitely weren’t leaving without fresh baked bread!

Satisfied with our day of discoveries, we lingered a moment longer to admire the stunning architecture and languish in the abbey’s utter silence.

Staring out into the pristine central courtyard, I practiced my vow of silence – for two loooong minutes – and speculated that by merely loitering about the abbey, some of the monks’ self-discipline and charitable spirit might osmosize my way.

Of course, if it’s possible for the spirit of what they embody to osmosize my way through their tasty, dark, unfiltered Belgian beer – even better!

Language Tip: Osmosize is not a real word. If you’re thinking you’ll whip it out at the next cocktail party to impress your host – don’t.

Where is Hauterive Abbey located?

Looking for more cool things to do in Fribourg, Switzerland?

Know Before You Go
Take a minute to PIN it!
43 shares