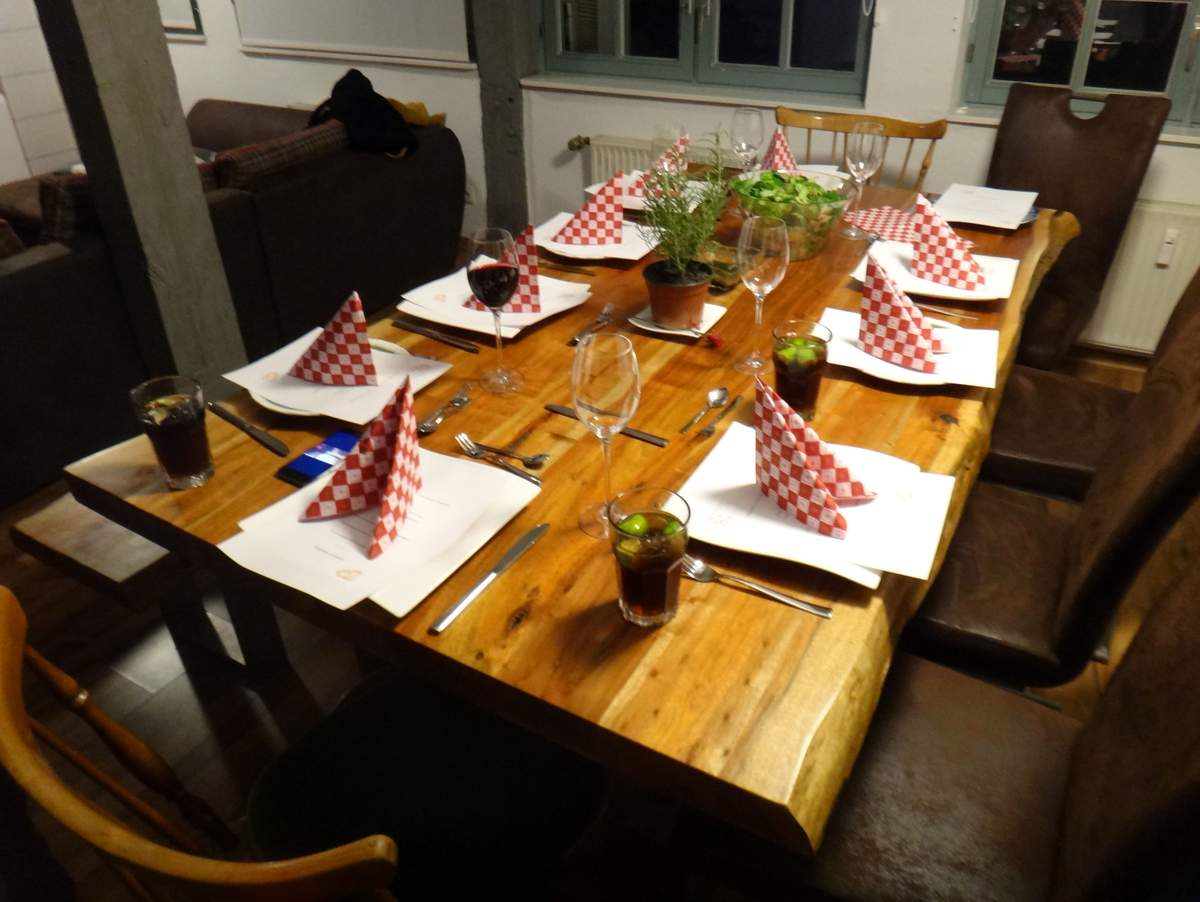 I’ve always wondered why our American holiday, Thanksgiving,  is on the fourth Thursday of November.  So random.  The first recorded harvest festival celebrated by the Pilgrims in 1621 wasn’t on a Thursday.  It was a three-day feast that more likely occurred in September or even October to celebrate a bountiful harvest.  But somehow Thursday became a tradition, one formalized as an official holiday by Abe Lincoln in 1863.  Canada followed suit not long after with their own federally recognized Thanksgiving in 1879, though they opted for the second Monday in October.  Equally random.

As newly arrived expats in Germany, we knew most folks would be going about business as usual on November 26th this year.  Planning to have a quiet, small-scale traditional dinner for just the two of us at our rented flat on Thursday, we ditched that plan when Trav’s co-workers invited us to join most of the lab, including his boss and her family, to the local Christmas market.  We eagerly accepted, enjoying a night filled with laughter, new friends, festive holiday decorations, and a very non-traditional dinner of crêpes, bratwurst, and glühwein.

Though the evening was quite fun, I still found myself lamenting the absence of a good ol’ turkey dinner with all the fixin’s, so we were both excited when another of Trav’s lab mates invited us to share dinner with some of their friends at their flat in Holzminden the following Saturday.  Since the spirit of the holiday is universal, I really have no preference for what day we celebrate it each year; If you cook it, we will come.

Trav’s labmate who invited us is from Nepal but lived for years in the US, so she and her fiancé are quite familiar with Thanksgiving.  Despite a last minute venue change to a friend’s flat that would accommodate our large group, we found their place near Holzminden’s Christmas Market (every village has one!) and were immediately made to feel welcome.  The place smelled amazing with all the right holiday smells, within minutes we both had cocktails in hand, and the table was beautifully set.  They had even printed out formal menus for every guest, laid out neatly on our plates. 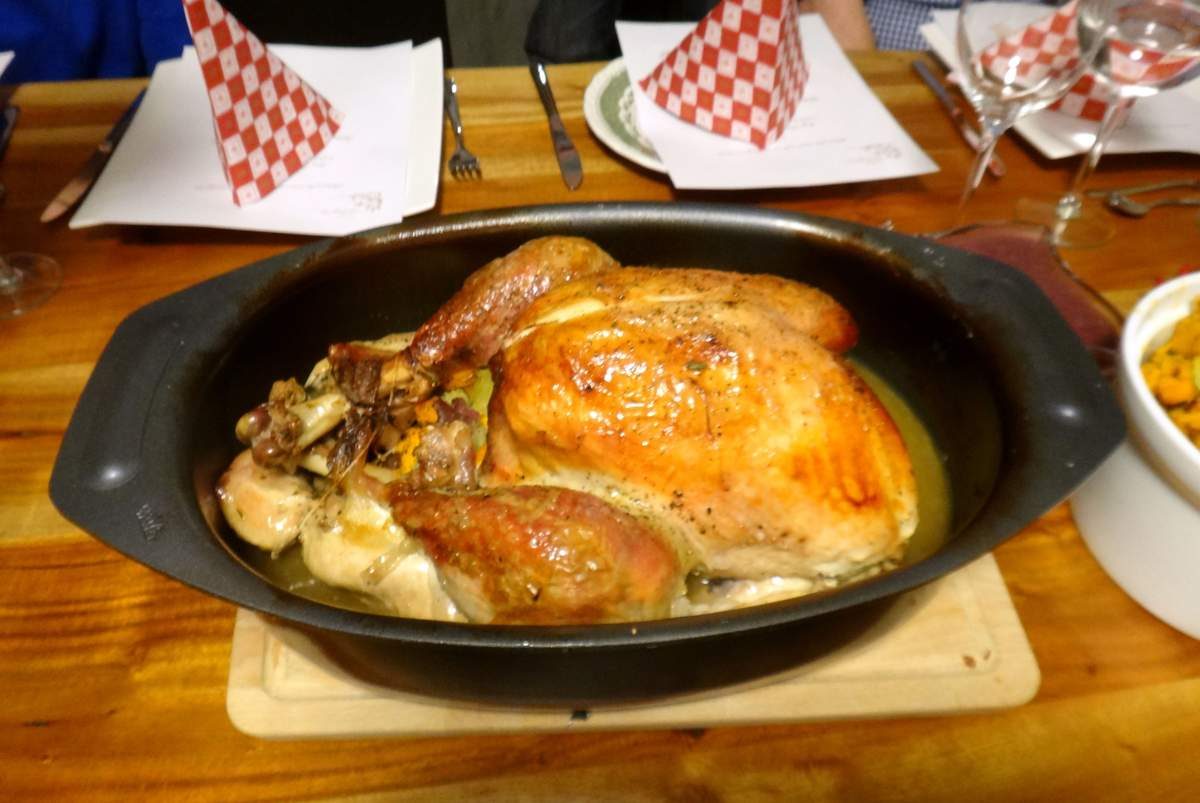 Along with a round of applause, a large hurrah went up as the turkey was placed before us.  When a row of smart phones appeared next to our camera to snap photos of the golden bird, I was struck by how things have changed and how young our crowd of friends was.  I’m not sure my mom ever took a photo of a Thanksgiving turkey, any of the countless feasts she’d prepared after an entire day in the kitchen, or even our family at dinner.  At least I’ve never seen any photos like that.

My silent musings didn’t last long, just until someone handed me a heaping plate worthy of gracing any American dining table.  For the first time since I was a kid, I ate Brussels sprouts, and for the first time in my life, I actually liked them.   The turkey, which had been stuffed with orange wedges rather than a traditional rice or bread stuffing, was juicy and tasty, particularly drizzled in champagne sauce.  And the cranberry sauce?  Très magnifique!  Hopefully our hosts will share the recipe so we can include it in future holiday dinners. 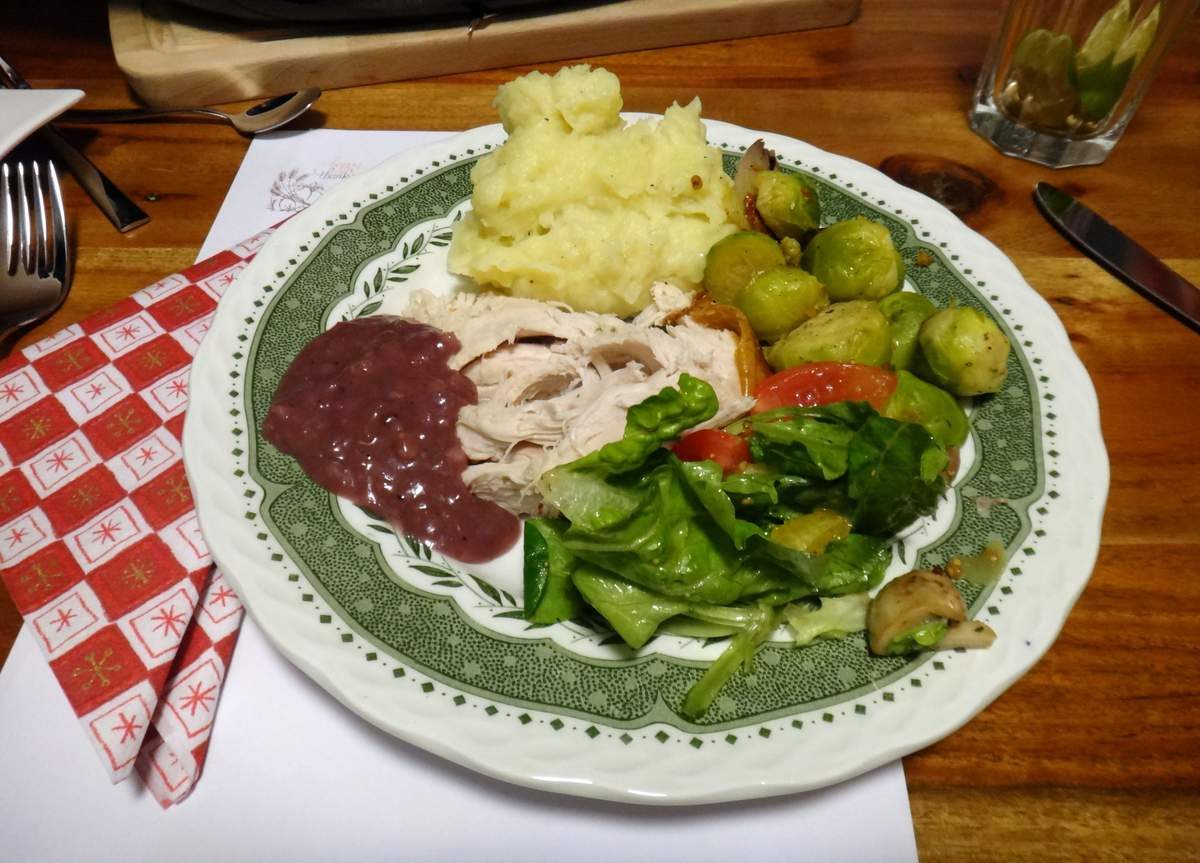 Before we could recover from dinner, we were hit with raspberry cheesecake and apple pie for dessert.  Double whammy! 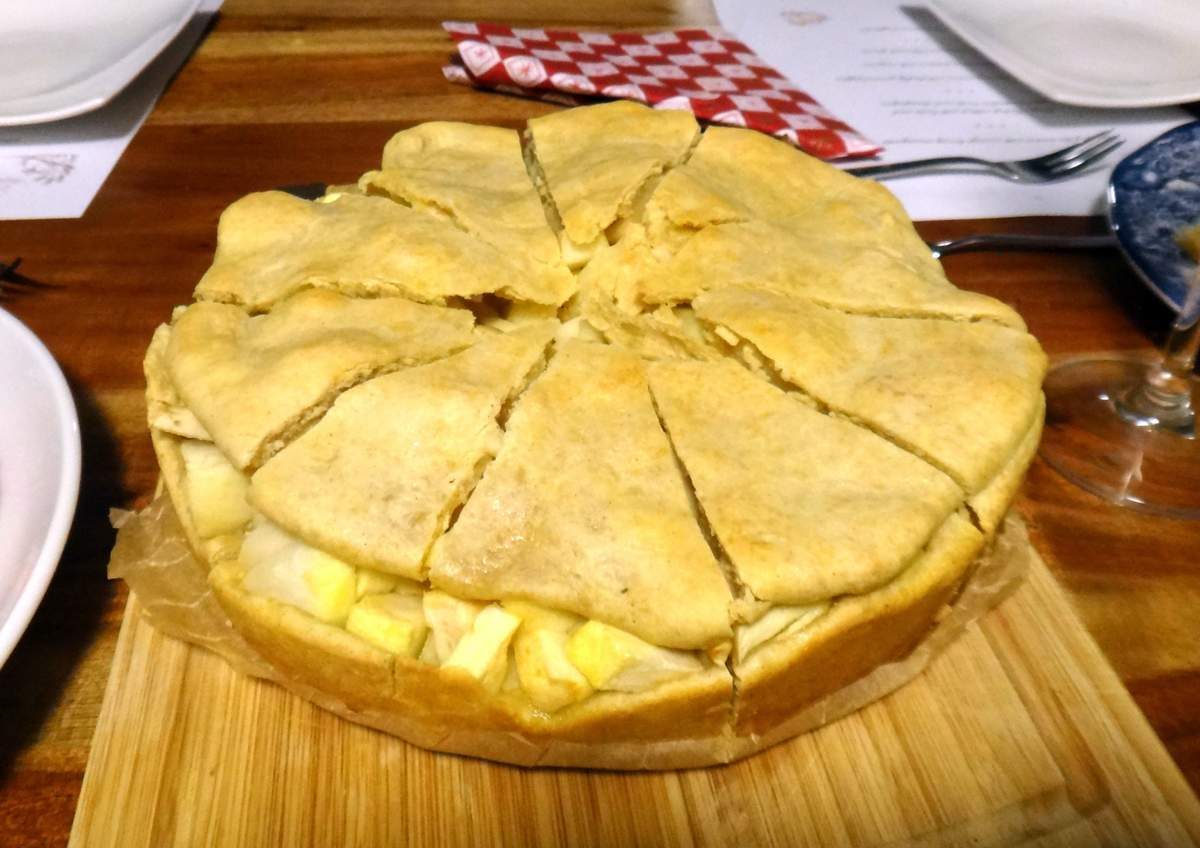 Around midnight,  I started thinking we should probably get going, but we were having such a good time, it was nearly 2 am by the time we thanked our hosts and gathered up our things.  We slowly made the hour-long drive back to Göttingen in the pouring rain, wearily climbing the winding stairs  to our guesthouse just before 3 am.  We were so exhausted, we didn’t even have the energy to answer a Skype request from Trav’s family in Idaho.

We hope everyone had a wonderful Thanksgiving!

Climbing into bed still stuffed from dinner, I fell asleep thinking of all the things for which I’m grateful, not the least of which is that Honest Abe declared Thanksgiving a one-day holiday.  I simply wouldn’t survive a three-day feast.