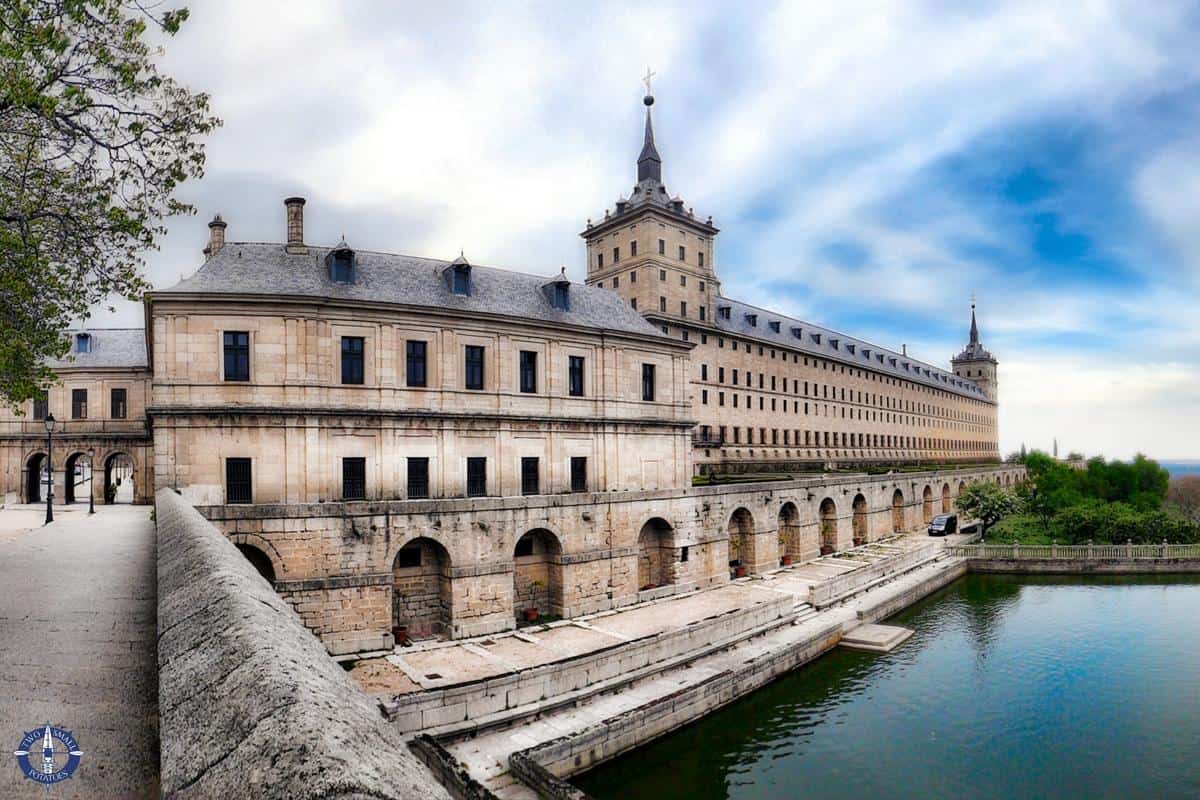 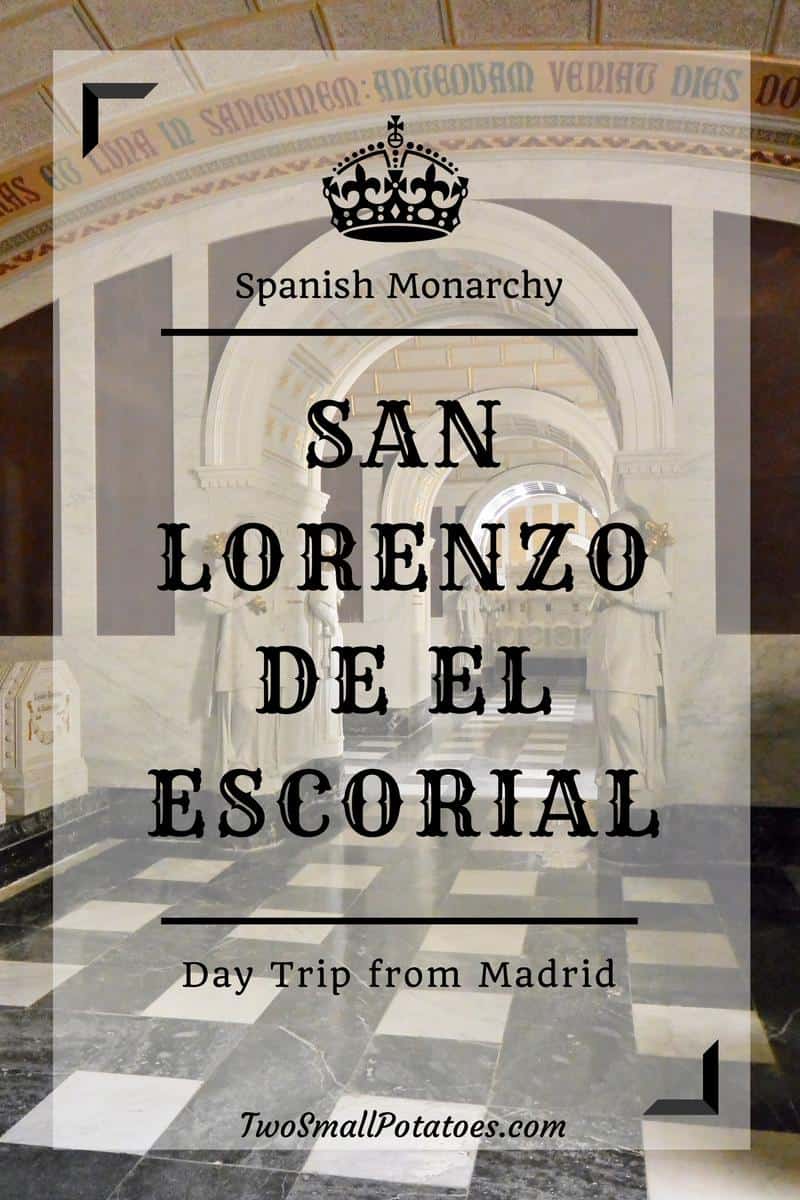 If you happen to find yourself in Madrid and you’re looking for a change of pace from city life, a great day trip is to the UNESCO World Heritage site of San Lorenzo de El Escorial. The sprawling monastic complex, which is the historic home and royal seat of the Spanish Monarchy, is located just 45 minutes by car northwest of the capital city.

Because the area around the monastery has several sites we wanted to see, we opted to extend our time beyond just a day trip. Lucky for us, Alicia and her parents generously offered to let us stay at their summer home in Collado Mediano for a couple of nights. From Madrid, we drove to Collado Mediano to drop off our things, then enjoyed the scenic 20 minute drive through lush green fields and pockets of low-growing trees to San Lorenzo de El Escorial.

We were pretty confused by seemingly contradictory signs in the area until Alicia explained that both the town and the monastery have the same name. The monastery is a couple of kilometers south of town along the outskirts.

Travel Tip: When you’re navigating to San Lorenzo de El Escorial, make sure you’ve selected the monastery and not the town.

Even when we arrived, I still didn’t know much of anything about this monstrously imposing and austere complex.

It’s far more than just a monastery. Historically, this was the home of Spanish kings and their royal family members. Commissioned by Spain’s King Philip II, construction began in 1563. Plans included not only an impressive basilica and monastery to combat the rising threat of Protestantism, but also a school, library, pantheon, and royal palace.

Designated a UNESCO World Heritage Site in 1984, it’s popular with tourists, in part due to its proximity to Madrid, and sees up to a half million visitors a year. 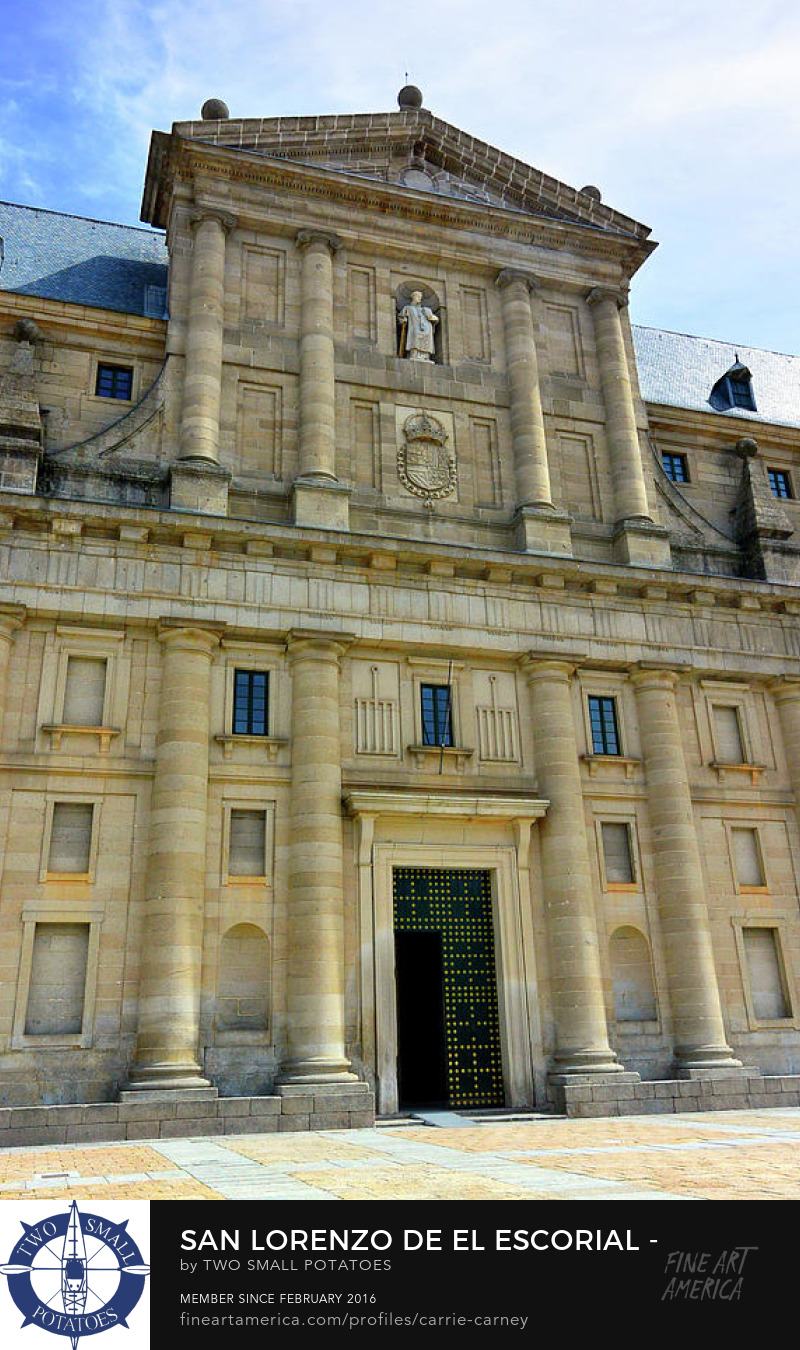 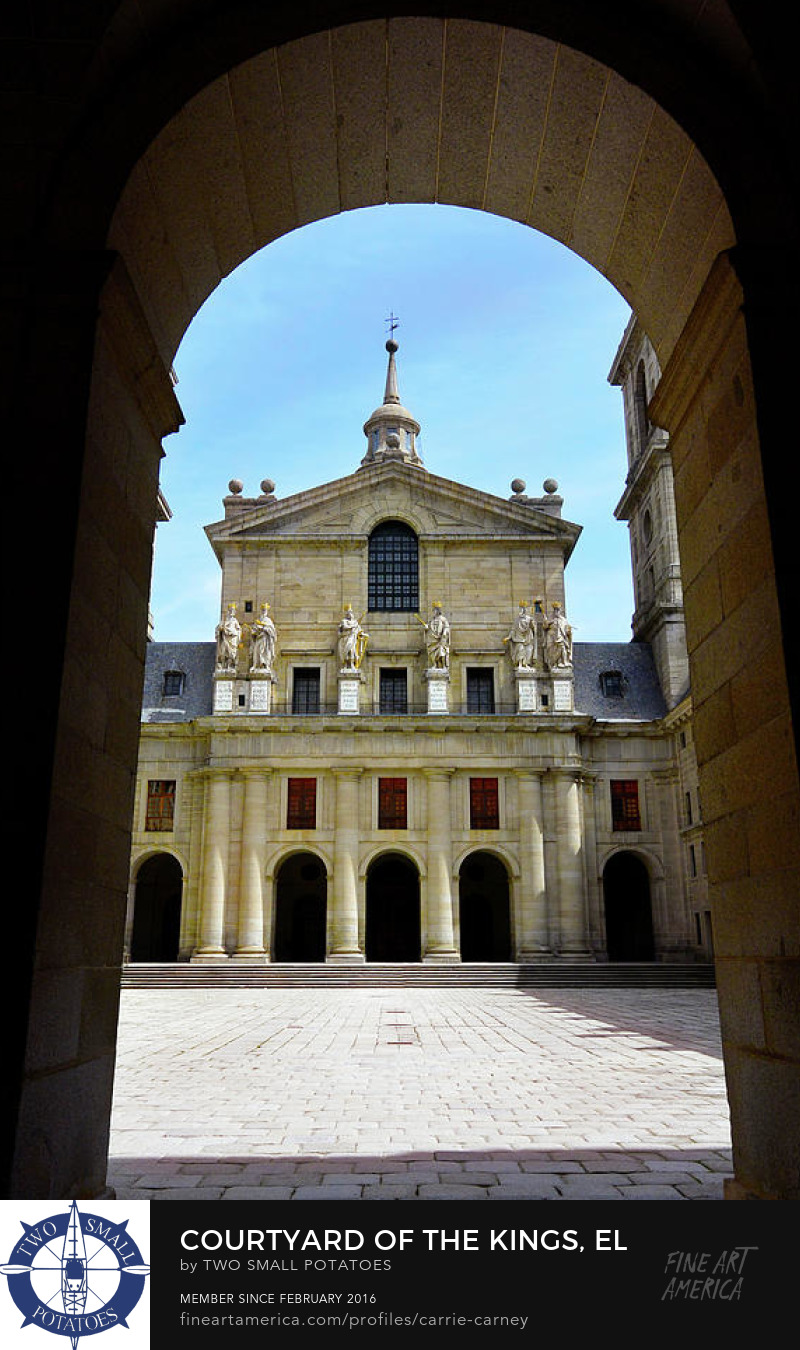 Starting our visit in the museum, which is artfully laid out, we browsed through room after room of 3D models of the complex, incredibly detailed blueprints, and walls of tools used during its construction. Even the original cornerstone that was laid in 1563 is on display.

One entire room features the reconstructed remains of a section of wooden ceiling framework from the monastery that was destroyed by termites in 1963. The giant wooden beams that had been imported from the coast of Cuba were reduced to Swiss cheese, riddled with holes.

The cornerstone that was first laid in 1563 is on display at the museum at El Escorial.

Anxious to see the monastery itself and the grounds, we didn’t stay long in the museum. Instead, we continued into the cool marble interior of the living quarters.

Undoubtedly everyone visiting will have different things about the complex that they really like and find most memorable. For us, it wasn’t the grounds, the cathedral, the priceless paintings by artists such as El Greco, or even the sheer size and opulence of the entire place that gave us pause.

Instead, it was these four highlights of El Escorial that we really recommend you not miss!

Travel Tip: Unfortunately photography isn’t allowed in much of the El Escorial interior, so we have limited photos to share.

Descending the stairs to this underground crypt, I was completely dumbfounded when the rough stone walls gave way to ornate, solid marble.

At the bottom, the stairs open directly into The Pantheon of Kings, a circular room with a domed ceiling that clearly was designed for royalty. The walls gleam with gold and bronze, the polished marble glistens in the dim light, and the somber columns of black coffins line the round room as if their dead were united in death even more than they were in life.

With the women laid to rest on one side and the men on the other, nearly every Spanish king and queen since Charles I is interred in the Pantheon.

Twenty-six coffins now inhabit the crypt, leaving room for only two more members before it’s effectively at full capacity. These two occupants are currently in the pudridero, or Rotting Room, a special chamber just off the crypt where newly deceased members are held for several decades until their bodies are fully decomposed, at which time they’re moved to their permanent interment in the crypt.

This means that there are no sepulchers remaining for the now-abdicated Juan Carlos I, Queen Sofía, or their son Felipe VI, the current king of Spain. A decision has yet to be made about where they, and future kings, will be laid to rest.

The Pantheon of Princes

Not far from The Pantheon of Kings is another series of tombs for other members of royalty.

The Pantheon of Princes holds tombs for royal children who died before they could assume the throne or those who weren’t in direct line to the throne. It’s made up of nine interconnected chambers lined with marble and a single main altar.

Garden of the Friars

Bordering the southern and eastern perimeter of El Escorial is the Garden of Friars – Jardín de Los Frailes.

From inside, the manicured decorative hedges are mostly visible only from barred windows through smudged glass. They’re still quite pretty, at least those that have been maintained.

During our visit, a long row of hedges on the adjacent side of the complex had been newly planted and were just seedlings. Others appeared rather neglected with more weed than shrub.

You can also walk through the gardens outside, though it’s difficult to see the stunning, intricate patterns in the shrubs and pathways. 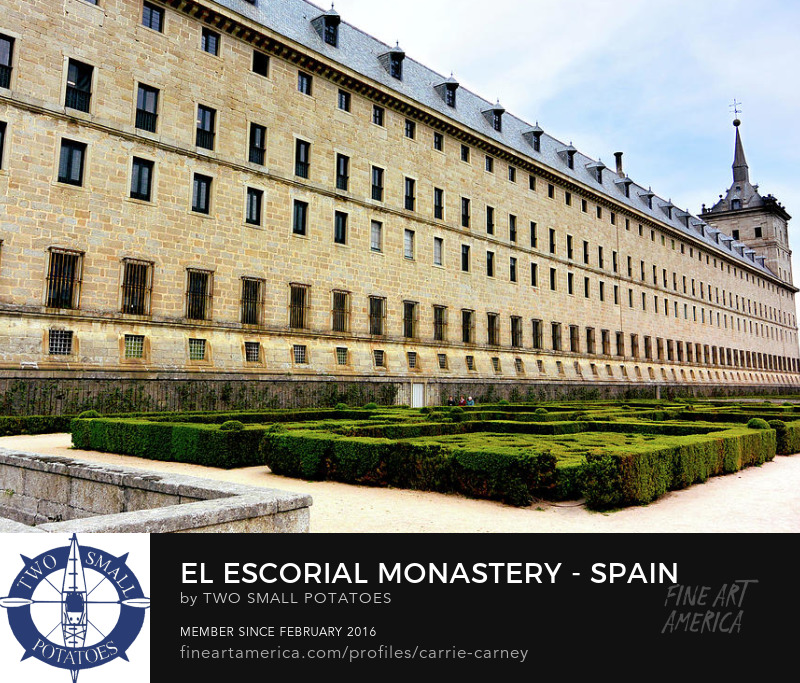 After the somber silence of rows of tiny coffins in the Pantheon of the Princes, it was a relief to leave the mausoleum for the crisp, cool air of evening. Elegant swans drifted on the tranquil rectangular reflecting pool.

The pool is located in the southwest corner of El Escorial next to the gardens. It’s a picturesque place for photos, with the broad expanse of the monastery and his many windows reflected in the greenish pool.

The Basilica of El Escorial

Some of the best exterior views of the monastery, especially the basilica, are from the gardens on the eastern side of the huge square complex. The domed tower of the basilica rises in the center. 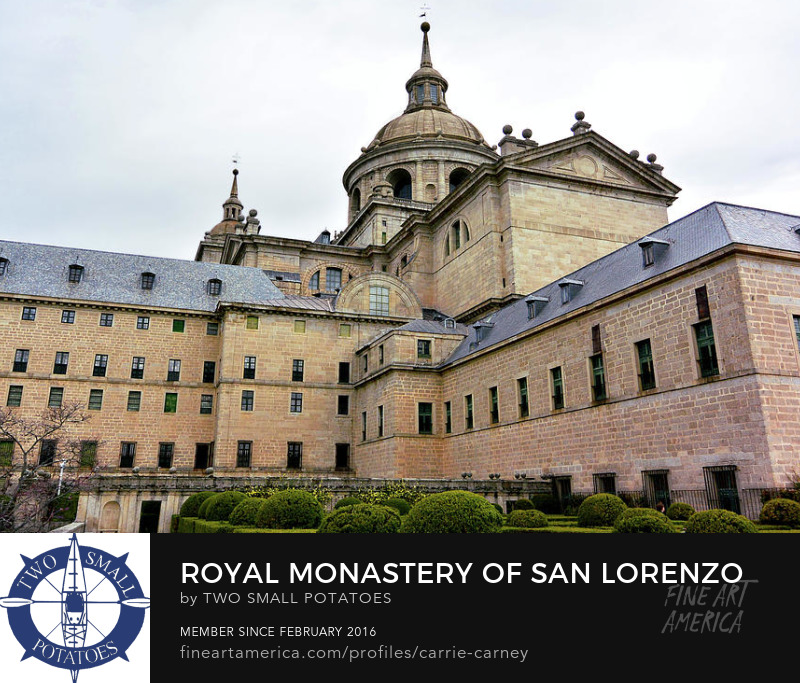 Make sure that you keep an eye on the time during your visit. El Escorial closes at 7 pm, and depending on where you are in the complex, you could have a ways to go to the nearest exit.

We happened to be out in the gardens when we suddenly realized the site was about to close and had to run all the way back around to the front to exit. This might not seem like a big deal, but considering the size of this place, I felt like I’d run a mini marathon.

The combined length of the interior corridors is 16 kilometers. The place is big!

One more interesting place to visit near El Escorial is the Silla de Felipe II, or the Chair of Philip II. We had never heard of it, but our Spanish friend Alicia was very familiar with it and thought we’d like it.

The site, which is a historic viewpoint overlooking San Lorenzo, is about 5 kilometers from town.

From the Chair of Philip II, the King is said to have watched as construction progressed on El Escorial in the valley.

During the 20+ years that it took to build El Escorial, legend says that King Philip II wanted to be able to monitor its progress. On his orders, several seats were carved out of a giant mound of granite overlooking the construction site far off in the valley.

Arriving in a small wooded parking area, we passed a simple hand-painted wooden sign indicating we had, in fact, arrived at King Philip’s royal chair. Climbing two short series of granite stairs, we reached the seats, three of them, side by side cut into a single rock.

Somehow I found it far more interesting to sit in the plain old rock chair King Philip had used to watch his palace rise from the ground than to see the priceless antique bed in his chambers at El Escorial where he’d died.

It was a perfect fit for the three of us.

With rain threatening and the sun long gone, we drove back to Collado Mediano and enjoyed dinner in front of a lovely wood fire. It was a great ending to a fun day!

I couldn’t imagine how Alicia could top it with whatever she had planned the next day.

Little did we know she had another great day trip planned to another UNESCO World Heritage site, nor could we know of the car troubles that were in store for us…

Know Before You Go
Like this content? Take a minute to PIN it!
Map of 10 Day Road Trip – Switzerland to Spain